To reduce smoking-related diseases, a research priority is to develop effective interventions for smoking cessation, and evidence from randomized controlled trials (RCTs) is usually considered to be the most valid. However, findings from RCTs may still be misleading due to methodological flaws. This study aims to assess the quality of 1083 RCTs of smoking cessation interventions in 41 relevant Cochrane Systematic Reviews (CSRs). Logistic regression analysis was performed to identify significant variables associated with the quality of RCTs. It was found that evidence for smoking cessation from RCTs was predominantly from high income countries, and the overall quality was high in only 8.6% of the RCTs. High quality RCTs tended to have a larger sample size, to be more recently published, and conducted in multiple countries belonging to different income categories. In conclusion, the overall quality of RCTs of smoking cessation interventions is far from perfect, and more RCTs in less developed countries are required to generate high grade evidence for global tobacco control. Collaboration between researchers in developed and less developed countries should be encouraged.

Tobacco use remains the leading preventable cause of premature deaths in the world, and smoking-related illness imposes a heavy economic toll on countries in both direct medical care and lost productivity [1]. While the prevalence of smoking has been declining in developed countries, cigarette smoking remains high, particularly among men, in less developed countries. The World Health Organization estimated that tobacco use is likely to cause over 8 million deaths per year in the next two decades, and more than 80% of these deaths will occur in low and middle income countries (LMICs) [2]. Therefore, one of research priorities is to develop and evaluate smoking cessation interventions, in order to prevent or reduce diseases attributable to tobacco use, in both developed and less developed countries.

Randomized controlled trials (RCTs) can provide valid evidence on the effectiveness of smoking cessation interventions. However, findings from RCTs may be misleading due to methodological flaws, including inappropriate patient allocation, lack of blinding, and imbalanced withdrawals from a study [3]. Risk of bias in RCTs should be carefully assessed, before applying results of RCTs to guide clinical and public health practice [4].

The process of the selection of relevant Cochrane Systematic reviews (CSRs) is shown in Figure 1. The initial search identified 156 CSRs from a total of 9301 records in the Cochrane Database of Systematic Reviews. We excluded 96 CSRs after screening their titles and abstracts, and excluded 19 CSRs after checking full text details. A total of 41 CSRs met the inclusion criteria and made up the dataset [8–48]. 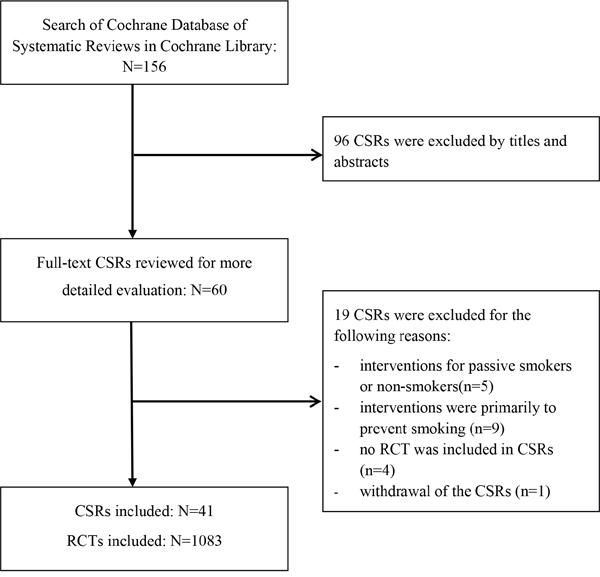 The main characteristics of the included CSRs are summarized in Table 1. Corresponding authors of the included CSRs were all from institutions in high-income countries. Smoking cessation interventions evaluated were behavioral therapy in 13 (31.7%), pharmaceutical aids in 6 (14.6%), psychosocial interventions in 5 (12.2%), tobacco control policies in 2 (4.9%), nicotine vaccines in 1 (2.4%), self-help in 1 (2.4%), and mixed interventions in 13 (31.7%). Of the 41 CSRs, 28 (68.3%) were updated after 2012. The 41 CSRs included a total of 1083 RCTs. The median number of RCTs included in these CSRs was 21 (interquartile range 7 to 35). Language restriction was explicitly applied in only three CSRs (including RCTs published in English or Chinese).

Table 1: The characteristics of the included cochrane systematic reviews (CSRs)

The main characteristics of RCTs and risk of specific biases

Table 2: The number and proportion of randomized controlled trials (RCTs) with low risk of bias by study characteristics

Note: RCTs conducted in “multiple-income” refers to RCTs that recruited participants in both high-income countries and LMICs.

The proportion of RCTs with a low risk of bias was 40.7% in terms of sequence generation, 30.6% in terms of allocation concealment, 23.4% in terms of blinding, 55.3% in terms of incomplete outcome, and 10.6% regarding reporting bias (Table 2). The quality regarding to sequence generation, allocation concealment and incomplete outcome was similar for RCTs conducted in high-income countries and in LIMCs, although it was highest when studies were conducted in mixed-income countries (that is, in both developed and less developed countries). The quality tended to be higher for RCTs published in English, compared with those published in other languages. With certain exceptions, the quality of RCTs tended to be positively associated with larger sample sizes and more recent publications. The use of both published and unpublished data was associated with low risk of bias in terms of sequence generation and allocation concealment, although the association was not consistent for other quality domains (see Table 2).

Note: High quality research is defined as at least 4 of the 5 quality items being low risk of bias.

Note: Dependent variable is defined as at least 4 of the 5 quality items being low risk of bias (0 for high risk, 1 for low risk).

RCTs may provide high-quality evidence, but they can also be graded down because of flaws in design, conduct and reporting. The current study found that less than 50% of the included RCTs had low risk of bias in specific quality domains, except for the bias due to incomplete outcome data (55.3%). It was noted that the proportion of RCTs with unclear or high risk of reporting bias was as high as 89.4%, indicating the existence of publication bias due to the tendency that significant results were more likely to be published [51–53].

In accordance with findings from previous studies [54, 55], the quality of the included RCTs has been improving over time, and was positively associated with a larger sample size. In addition, the quality of RCTs conducted in multiple nations belonging to different income groups was higher than those conducted in either high-income countries or in LMICs. However, the current study found no significant difference in quality between RCTs in LMICs and those in high-income countries, in contrast to findings from a previous study [7]. It should be acknowledged that the number of RCTs from LMICs in this study is very small (n=30), and reported quality may not necessarily reflect the true quality of trials [53].

This study found that most of the include RCTs were from high-income countries (96.1%), and were published in English (96.9%). The possible explanations include lack of research in LMICs, and researchers with English writing capability may have a strong presence in research activities for smoking cessation intervention. Even when studies had been conducted in LMICs and/or by non-English speaking researchers, they might not be published, or published in journals that are not indexed in the widely used bibliographic databases such as MEDLINE and EMBASE. It is unclear whether and about the extent to which RCTs conducted in LMICs or published in languages other than English might have been missed from CSRs. Although the number of RCTs from LMICs (n=30) or published in non-English languages (n=34) was very small in the current study, we found no significant difference in quality between RCTs conducted in developed and less developed countries, and between RCTs published in English and those published in other languages.

We only assessed RCTs included in Cochrane systematic reviews, and some relevant RCTs of smoking cessation interventions might have been missed. For example, the CSRs may have excluded some low quality RCTs from LMICs and non-English speaking countries that mislabeled study designs or did not adhere to the CONSORT guidelines for reporting [62]. If this is the case, our analysis may have overestimated the quality of RCTs on smoking cessation. The assessment of quality and risk of bias was based on what is reported by authors, and the actual conduct may be different. In addition, we did not analysis the primary outcome on smoking cessation interventions, which will be the focus of a further study.

The evidence from RCTs was predominantly from high income countries and published in English language. The overall quality of RCTs of smoking cessation interventions is far from perfect, and the quality of RCTs was positively associated with a larger sample size and more recent years of publication. More RCTs with low risk of bias are required in LMICs to generate high grade evidence for global tobacco control. Collaboration between researchers in developed and less developed countries should be encouraged.

Cochrane Database of Systematic Reviews in Cochrane Library (Issue 3 of 12, 2016) was searched to identify eligible CSRs. The search strategy used the following combination terms: 'smok* OR tobacco OR cigarette* OR nicotine' in Title, Abstract, or Keywords. Identified CSRs were transferred into an Endnote database.

Figure 1 shows the process of selection of CSRs. We first examined titles and abstracts of CSRs, and then checked full text details for those that were possibly eligible. Eligible CSRs were those updated since 2010 and evaluated smoking cessation interventions for current smokers. We exclude CSRs that focused on interventions exclusively for passive smoking, and interventions for the primary prevention of tobacco use. There was no restriction on the length of follow up and the primary outcome measures. Two researchers (HF and JW) applied the inclusion and exclusion criteria to select relevant CSRs, and a third reviewer (FS) was involved when it was difficult to decide the eligibility of a CSR.

Data extraction was conducted by two researchers (JS and LW) and then checked by a third researcher (HF). Any disagreement was resolved by discussion. We extracted data on the following items from the included CSRs:

From RCTs included in the CSRs, we extracted data on the following elements:

Assessment of risk of bias in included RCTs

Risk of bias in all RCTs included in CSRs was assessed in terms of six quality domains: (1) the adequacy of sequence generation, (2) allocation concealment, (3) blinding of patients, care providers and outcome assessors, (4) incomplete outcome data, (5) free of selective outcome reporting, and (6) free of other bias, using the Cochrane Collaboration’s tool for assessing risk of bias [4]. For each of the six domains, risk of bias could be judged as being high, low, or unclear. Because risk of other biases (the last item) was inconsistently assessed in CSRs, we used results of risk of bias assessment for the first five domains. In this study, the quality of a RCT was considered to be high, if risk of bias was low for at least 4 of the 5 quality domains.

Normality of distribution was determined using QQ plots and Kolmogorov–Smirnov test. For the comparison of categorical variables, Pearson's chi-square test or Fisher’s exact test was used as appropriate. To explore the factors associated with risk of bias of included RCTs, we conducted multi-variable logistic regression analyses. Two-tailed P values of less than 0.05 were considered statistically significant. In the logistic regression model, we adopted the Enter Method to achieve a final model. The standard for the variable inclusion was based on SLE=0.05, and the exclusion standard was SLS=0.10. All data were processed using the program SPSS 18.0 (SPSS, Inc., Chicago, IL, USA) and Epidata 3.1.

The authors declared that no competing interests exist.

62. Langer A, Diaz-Olavarrieta C, Berdichevsky K, Villar J. Why is research from developing countries underrepresented in international health literature, and what can be done about it? Bull World Health Organ. 2004; 82:802-803.