Because the need of clinical prognostic evaluation by specific metastatic organ, we aim to analyze the prognostic factors in lung cancer patients with M1b disease with Surveillance Epidemiology and End-Results database (SEER). This retrospective study evaluated lung cancer patients of adenocarcinoma (AD), squamous cell carcinoma (SQCC), and small cell lung cancer (SCLC) selected from SEER. We provided the prognostic correlates of overall survival (OS) and lung cancer-specific survival (LCSS) in this population. 23,679 eligible patients were included. Bone was the most common metastatic site in AD (63.1%) and SQCC (61.1%), while liver was the most prevalent site (61.9%) in SCLC. Single site metastasis was significantly associated with better outcome compared to multiple sites metastases in all patients. Among patients with single site metastasis, OS and LCSS were longer for AD and SCLC if involving brain or bone, with median survival time of 5 to 7 months, comparing to 3 months if invloving liver (all p-values < 0.001). Similarly, among patients with multiple metastases, better outcomes were observed in AD patients (4 vs 3 months; OS and LCSS, p < 0.001) and SCLC patients (6 vs 4 months; OS, p = 0.017; LCSS, p = 0.023) without liver metastasis compared to those with liver metastasis. In conclusion, we estimated multiple survival outcomes by histology of primary tumor and sites of metastasis. Liver metastasis is found to be the worst prognostic factor for AD and SCLC patients with distant metastasis. More in-depth research is warranted to identify patients who are prone to develop distance metastasis, especially to liver.

Lung cancer is the second most commonly diagnosed cancer among men and women in the United States [1]. Approximately 40% of newly diagnosed patients present with metastatic disease [2]. In the seventh edition of the tumor, node and metastasis classification of lung cancer, distant metastasis was categorized as M1b, with only 1% of patients being alive at 5 years [3]. As reported, 25%–40% of non-small cell lung cancer patients developed brain metastases [4], while 10% of SCLC patients had brain metastases at time of diagnosis [5]. Lung cancer other than SCLC had almost the same frequency of liver metastasis (2.9–4.1%), whereas in SCLC patients 17.5%-20.3% developed liver metastasis [6, 7].

Identifying factors with the prediction value of long-term survival may contribute to managing disease [8]. Morgensztern et al. found better survival rates of AD compared to SQCC in stage IV lung cancer patients [9]. Waqar et al. suggested that brain irradiation is 67% more likely to be used in AD compared to SQCC [10]. Eberhardt et al. reported that single metastatic lesions in the adrenals showed significantly poor prognosis, which could not be confirmed in all patient groups analyzed [11]. However, previous studies could not substantiate any organ system with a significantly different prognosis compared to others.

Hence, the objective of the present study was to evaluate the prognostic correlates of overall survival (OS) and lung cancer-specific survival (LCSS) in lung cancer patients with distant metastasis by using the Surveillance, Epidemiology, and End Results (SEER) database.

M1a: Separate tumor nodules in a contralateral lobe or tumor with pleural nodules or malignant pleural dissemination; Bold values corresponds to the comparisons with P < 0.001. 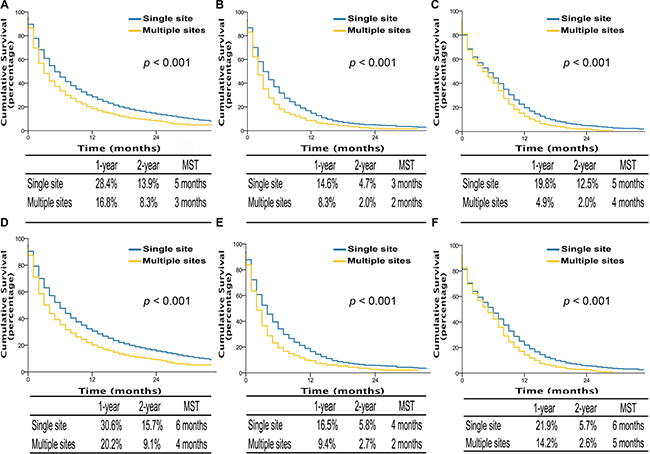 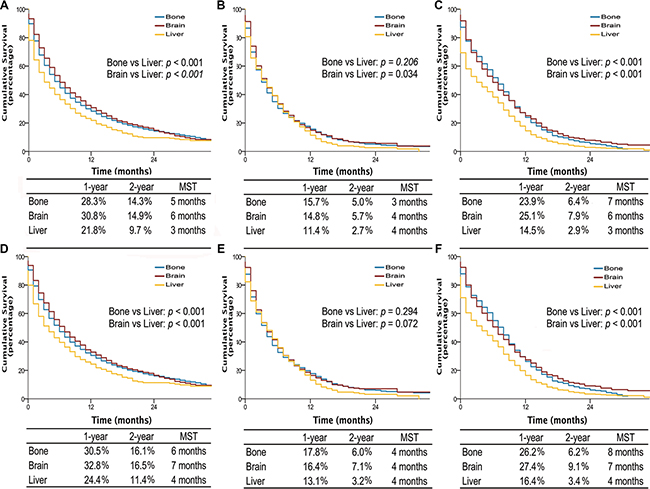 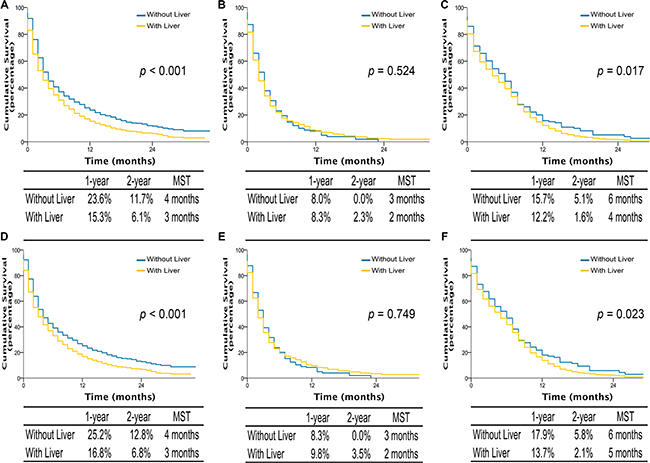 The main finding of this study is that, the AD patients and SCLC patients in M1b lung cancer without liver metastasis had a better prognosis than those with liver metastasis. We (1) confirmed major difference in metastatic frequencies among lung cancer patients with AD, SQCC, and SCLC and (2) identified prognostic factors of specific combinations of metastatic sites.

Knowledge of difference in metastatic patterns may be useful in making diagnosis of metastasis and treatment decision. Regarding the metastatic patterns of different histologic types, we found that both AD and SQCC metastasize predominantly to bone. Similarly, previous studies have reported that 30–40% of patients with lung cancer developed bone metastases with median survival time of 7 months [4]. Interestingly, we found that SCLC metastasizes predominantly to liver (61.9%). The incidence of liver metastasis in patients with lung cancer has been reported to be 37–51% in autopsy [12]. Nakazawa et al. reported that among 251 SCLC patients diagnosed, 79 patients had distant metastasis, of which 51 (64.5%) of metastatic patients had liver metastasis, which also supported out results [13].

The effect of histology on survival of lung cancer patients with distant metastasis has not been well delineated. In a recent research, Morgensztern et al. evaluated the role of histology in NSCLC stage IV from 1990 to 2005 among the SEER data [9]. However, only in the time period between 2002 and 2005, it was observed increased survival for AD compared with SQCC (OS, HR, 1.033, p = 0.02), while there were no significant survival difference between AD and SQCC before 2002 [9]. In previous trials, AD showed increased response rates compared with other histologies, which was supported by subsequent phase III studies using gefitinib or erlotinib [14]. Among patients having pemetrexed, AD showed better outcome compared with SQCC [15]. Since TKIs has spread between 2010 and 2012, the recent differences in outcomes based on observed histology may reflect the increased activity of TKIs in AD compared to SQCC.

All cited in reference.

To our knowledge, this is the first SEER based study focused on the metastatic pattern of different histologic types of primary lung cancer, considering them separate entities. However, there are obvious limitations, as outlined below. First, it is important to note that the database contains only the data collected between 2010 and 2012. Furthermore, we have only information on synchronous metastasis to bone, brain, and liver that affects significantly less patients compared to those patients who will develop metachronous metastatic lesions and other organs. These limitations may have led to an underestimation of other sites of metastasis, but as previous reports estimated, the three sites of metastasis assessed accounted for 80% of lung cancer patients [9, 11]. Moreover, because the SEER database set was not integrated for distant metastasis, interesting information, such as number of metastatic lesions, AD subtypes, SQCC subtpyes, ECOG performance status, tumor mutation, and therapy type were not included.

In conclusion, based on the SEER data, we estimated and compared multiple survival outcomes for M1b lung cancer patients by histology of primary tumor and sites of metastasis. Liver metastasis is found to be the worst prognostic factor for AD and SCLC patients with distant metastasis. More in-depth research is warranted to identify patients who are prone to develop distance metastasis, especially to liver.

We hypothesize that SEER is a good database from which to analyze the distant metastasis pattern for lung cancers. So, we sent an application through a SEER custom data request and received their permission. This database only includes metastasis to the bone, brain, and liver at the time of diagnosis.

The data were presented as frequencies (percent) or median (range) deviation. The comparison of demographic, pathologic, and therapeutic features between metastasis sites was performed using unpaired t-test for continuous variables and Pearson χ2 test for categorical variables. The OS and LCSS were analyzed by using the Kaplan-Meier method and the log-rank test comparing survival in two or more groups. Multivariate Cox proportional hazard analyses were applied to adjust the potential confounders related to demographic, pathologic, and therapeutic features in the survival analysis. A two-sided p value < 0.05 was regarded statistically significant. All analyses were conducted using SPSS 23.0 (SPSS Inc. Chicago, IL) and bar chart were drawn using GraphPad Prism 6.0 (GraphPad Software, San Diego, CA).

We would like to thank to all the staff members of the National Cancer Institute, who have been involved with the Surveillance, Epidemiology and End Results (SEER) Program.