Recent studies have focused on the associations of catalase polymorphisms with various types of cancer, including cervical and prostate cancers. However, the results were inconsistent. To obtain a more reliable conclusion, we evaluated the relationship between the two common catalase gene polymorphisms (rs1001179 and rs794316) and cancer risk by a meta-analysis. Our meta-analysis included 37 published studies involving 14,942 cancer patients and 43,285 cancer-free controls. Odds ratios (ORs) and 95% confidence intervals (CIs) were used to evaluate the cancer risk. The results demonstrated that the rs1001179 polymorphism was associated with an increased cancer risk in the recessive and homozygote models (TT vs. CC: OR = 1.19, P = 0.01; TT vs. CT+CC: OR = 1.19, P <0.001). Furthermore, stratified analyses revealed a significant association between the rs1001179 polymorphism and prostate cancer in all models except the homozygote comparison. An association of the rs794316 polymorphism with cancer risk was detected in two genetic models (TT vs. AA: OR = 1.34, 95% CI = 1.03–1.74, P <0.001; TT vs. AT+AA: OR = 1.39, 95% CI = 1.09–1.77, P = 0.01). Additional well-designed studies with large samples should be performed to validate our results.

Worldwide, cancer is currently the main cause of death and a public health problem that seriously threatens human health [1]. Biological and epidemiological studies have shown that carcinogenesis is a sophisticated, multivariate process resulting from interactions between genetic and environmental factors [2]. However, the exact mechanism of carcinogenesis has not been fully elucidated. Many aspects of malignant cancers, including carcinogenesis, aberrant growth, metastasis, and angiogenesis, have been attributed to reactive oxygen species (ROS) [3]. Such ROS-mediated damage to cellular macromolecules is thought to accumulate as a function of age, thus promoting carcinogenesis [4, 5].

Catalase (CAT) is an important endogenous antioxidant enzyme that decomposes hydrogen peroxide to oxygen and water, thus limiting the deleterious effects of ROS[6]; accordingly, the CAT gene may play an important role in substance metabolism. CAT is located on the nuclear chromosome 11p13, and polymorphisms in this gene have been reported to associate with the development of many types of cancer, such as invasive cervical cancer and prostate cancer [7].

The rs1001179 polymorphism (C-262T) is located in the promoter region of CAT, where it influences transcription factor binding and alters the basal transcription and consequent expression of the encoded enzyme [8]. The rs794316 polymorphism (A-15 T) has been identified in the promoter region near the CAT start site, and the endogenous variability of this promoter likely plays a role in the host response to oxidative stress [9]. A large number of previous studies in humans have suggested a possible correlation between genetic polymorphisms of CAT and susceptibility to cancers, such as prostate cancer [10-14], breast cancer [15], and hepatocellular carcinoma [16-19]. However, those studies published inconsistent results. Accordingly, we conducted a meta-analysis to combine data from all of the available case-control studies in order to validate the association of CAT polymorphisms with cancer risk.

A flow chart of the study selection process is shown in Figure 1. Initially, 374 articles were identified. After reading the titles and abstracts of all the articles, 310 were excluded (164 articles were not related to cancer patients, 137 articles were not case-control studies and 9 articles were about other polymorphisms). After searching through the full texts of the remaining articles, an additional 15 were excluded, including 9 articles that contained no useful data and 6 articles that had re-reported data. Finally, a total of 37 studies from 29 published articles, involving 14,942 cases and 43,285 cancer-free controls, were included in this meta-analysis. The eligible studies presented data for several different cancer types, including prostate cancer, hepatocellular carcinoma, breast cancer, and colorectal cancer. Among these studies, 10 were based on Asian populations [9, 13, 15-17, 20-22], 20 on Caucasian populations [7, 10, 11, 14, 18, 23-33], 1 on an African population [14], and 6 on mixed-ethnicity populations [12, 19, 31, 34-36]. Furthermore, in 3 studies, the genotype distributions of the control groups departed from Hardy-Weinberg equilibrium (HWE) [7, 10, 20]. The characteristics of the eligible studies are presented in Table 1. 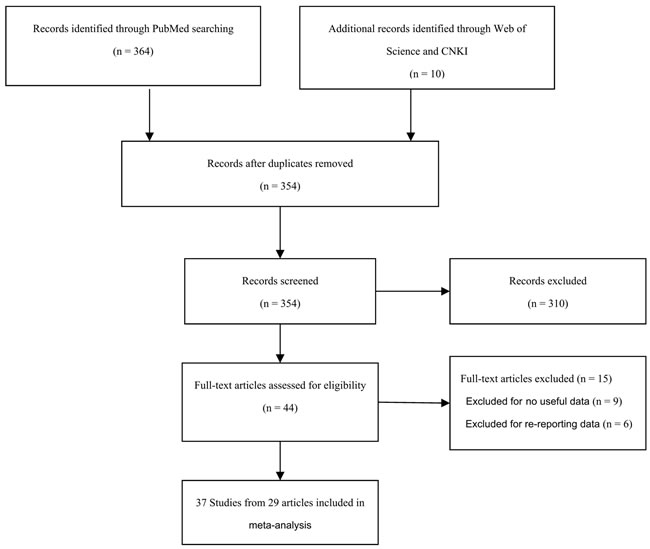 Table 2: Genotype Distribution and Allele Frequency of CAT polymorphisms in Cases and Controls

Table 3: Meta-analysis of the association between CAT polymorphisms and cancer risk 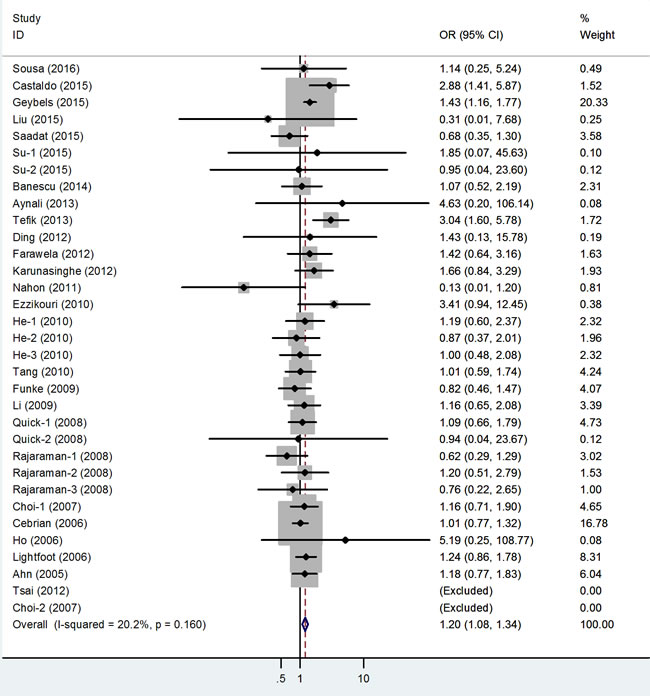 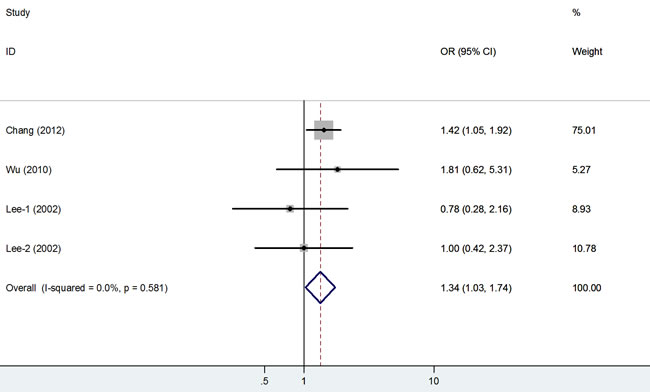 In this meta-analysis, Q-statistic test was used to detect between-study heterogeneity that arose from methodological or clinical dissimilarity across studies. When the P value of the heterogeneity test was more than 0.1 (P ≥0.1), a fixed-effects model was performed. Otherwise, the random-effects model was used. To explore the other factors which may influence our results, we performed a meta-regression analysis. As shown in the Table 4, sample size was not the factor which could be involved in cancer susceptibility (P = 0.134). Furthermore, the results revealed that the publication year, ethnicity, genotype method and the source of controls were all not the factors that could impact on our results (P = 0.088, 0.368, 0.676 and 0.300, respectively). We also performed a funnel plot and Egger’s test to assess publication bias. As shown in Figure 4, the funnel plots failed to reveal any obvious asymmetries of the 2 polymorphisms in the overall population, and the results of Egger’s test revealed no publication bias (P > 0.05). Therefore, the results revealed that publication bias was not significant in this meta-analysis.

A single study was deleted one at a time from the meta-analysis to reflect the influence of each individual dataset on the pooled ORs. The analysis results demonstrated that no single study greatly influenced the overall cancer risk estimations with respect to the CAT polymorphisms (Figure 5), which indicates that our results are statistically robust. 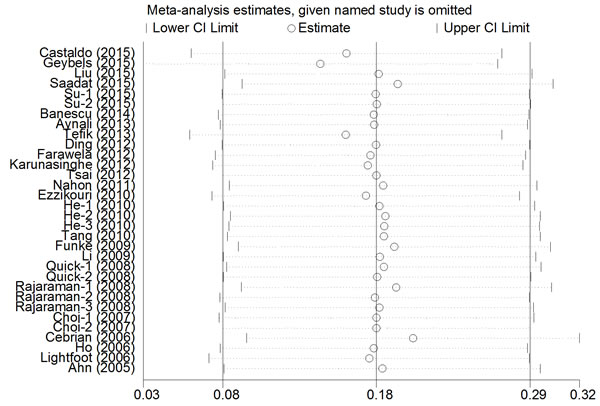 Figure 5: Sensitivity analysis of the association between CAT rs1001179 polymorphism and cancer risk under the homozygous model.

A previous meta-analysis including 9,777 cancer patients and 12,223 controls showed significant association between rs1001179 polymorphism and cancer risk in the recessive model [39]. Compared with that meta-analysis, our meta-analysis included 11 new independent studies of hepatocellular carcinoma [16, 17, 22, 34], chronic myeloid leukemia [24], laryngeal cancer [25], colorectal cancer [20], and oral cavity cancer [9]. Different from the previous result, we observed an association between the rs1001179 polymorphism and an increased cancer risk in the homozygote model. And it is worth mentioning that we found an association of the rs794316 polymorphism with cancer risk in recessive model and homozygote model, which wasn’t detected by anyone before.

Because the control group genotype distributions departed from HWE in 3 studies, we performed a subgroup analysis that excluded those studies. Regarding the rs1001179 polymorphism, the result was remained consistent with the overall analysis; in other words, an association between an increased cancer risk and rs1001179 polymorphism was observed in recessive model and homozygote model. Nevertheless, we observed no significant association between the rs794316 polymorphism and cancer risk with any of the genetic models, although this might be a consequence of the small number of studies.

Several limitations of this meta-analysis should be acknowledged. First, only Asian population was involved in the analysis of rs794316, and most studies of rs1001179 are for Caucasian and Asian population. Accordingly, it would be better to include more studies with various ethnic groups to identify their definite roles in different populations. Second, some detailed information (e.g., sex, age, lifestyle, and environmental factors) was not considered. Third, the overall outcomes were based on individual unadjusted ORs, whereas a more precise evaluation should be adjusted using other potentially suspect factors. Fourth, the genotyping methods used in the eligible studies differed widely, which might have influenced the results. Moreover, although we have summarized all data on rs794316 polymorphism and cancer risk, the number of relative studies still needs further expansion.

In summary, this meta-analysis has shown associations of the CAT rs1001179 and rs794316 polymorphisms with an increased cancer risk. Additional larger-scale multicenter studies with larger sample sizes are needed to further validate the possible roles of these polymorphisms in cancers.

The PubMed, Web of Science, and Chinese National Knowledge Infrastructure (CNKI) databases were searched for publications from 2002 to January 2016 using the terms “cancer” or “tumor”, “CAT” or “Catalase”, “polymorphism” or “SNP”, “rs1001179” or “C-262T”, and “rs794316” or “A-15 T”. We also used the “Related Articles” option in PubMed to identify additional studies of the same topic. The reference lists of the retrieved articles were also screened. All included studies were selected using the following criteria: (a) studies must have featured a case-control design and focused on CAT polymorphism and cancer risk; (b) published data must have been sufficient to allow OR estimation with a 95% CI; and (c) for multiple publications reporting the same data or overlapping data, the largest or most recent publication was selected.

Initially, 2 investigators (Liu K and Liu XH) independently checked all potentially relevant studies, and disagreements were resolved through discussions with a third researcher. We extracted the following items from each article: first author, year of publication, country of origin, ethnicity, cancer types, control source, genotyping method, total numbers of cases and controls, and numbers of different genotypes among cases and controls. All data were extracted from published articles. All cancers were confirmed by histology or pathology. The non-cancer controls had no evidence of any malignant disease at the time of the study.

We used ORs and 95% CIs to evaluate the cancer risks associated with CAT polymorphisms. Heterogeneity between studies was evaluated using the I2 test, with a higher I2 value indicating a higher level of heterogeneity (I2 = 75-100%: extreme heterogeneity; I2 = 50-75%: great heterogeneity; I2 = 25-50%: moderate heterogeneity; I2 < 25%: no heterogeneity). During the heterogeneity evaluation, the fixed-effects model would be used if the P value was ≥0.10; otherwise, the random-effects model was used. Subgroup analyses were performed according to cancer type, control source, and ethnicity. A sensitivity analysis was performed to assess the stability of the final results by sequentially omitting each individual study at a time. Egger’s test and Begg’s test were adopted to assess publication bias. The meta-analysis assessed the following genetic models: dominant model (AB+BB vs. AA), recessive model (BB vs. AA + AB), homozygote comparison (BB vs. AA), heterozygote comparison (AB vs. AA), and allele comparison (B vs. A). All analyses were performed using the Stata software, version 12.0 (Stata Corp., College Station, TX, USA). A P value < 0.5 was considered statistically significant, and all P values were 2-sided.

4. Costa A, Scholer-Dahirel A and Mechta-Grigoriou F. The role of reactive oxygen species and metabolism on cancer cells and their microenvironment. Seminars in cancer biology. 2014; 25:23-32.

27. He C, Qureshi AA and Han J. Polymorphisms in genes involved in oxidative stress and their interactions with lifestyle factors on skin cancer risk. Journal of dermatological science. 2010; 60:54-56.