Methods: Operable women with stage I-IIIa breast cancer between 2003 and 2006 in our institution were included. 1,408 patients were divided into 3 groups according to the time to adjuvant chemotherapy: ≤4 weeks, 4-8 weeks, and >8 weeks. Disease-free survival (DFS) and overall survival (OS) were calculated.

However, the optimal time from surgery to initiation of adjuvant chemotherapy is still controversial. In 1970s, investigators found that tumor removal as well as surgical trauma might lead to an accelerated growth of distant micrometastasis [2], providing a biological rationale to start chemotherapy as soon as possible after the removal of the primary tumor. However, it seems that it is unrealistic to conduct a randomized trial of time to adjuvant chemotherapy. Several retrospective studies evaluating the role of early or delayed initiation of adjuvant chemotherapy have been published reporting conflicting results [3–7]. It is could be explained by the differences in characteristics of patients and diseases, as well as the arbitrarily selected cutoff for delayed time.

We previously performed a systematic review and meta-analysis [8]. Seven eligible studies involving 34,097 patients (studies from 1978 to 2013) were included. Most used adjuvant chemotherapeutic regimens were cyclophosphamide, methotrexate, and fluorouracil (CMF) or anthracycline-based. Our meta-analysis demonstrated that a 4-week delay of chemotherapy was associated with a significant decrease in both overall survival (OS)(hazard ratio [HR], 1.15; 95% confidence interval [CI], 1.03-1.28) and disease-free survival (DFS)(HR, 1.16; 95% CI, 1.01-1.33). Since most included studies used CMF and anthracycline-based regimen, whether the results could extrapolate to the current taxane-based therapy is unknown. Moreover, a most recent report from Gagliato et al [9] indicates that the delayed adjuvant chemotherapy is particularly meaningful for patients with advanced disease, triple-negative breast cancer (TNBC), and trastuzumab-treated HER2-positive (HER2+) tumors. Whether the influence of delayed chemotherapy on breast cancer survival is subtype-dependent or not needs further investigation. Therefore, we conducted this retrospective analysis using our single-institution data to provide a complementary piece of evidence in this field. 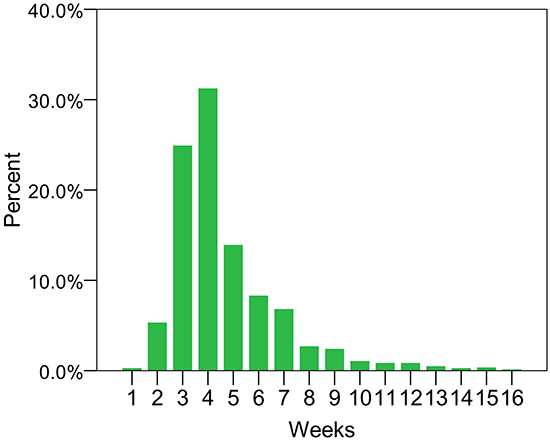 Figure 1: The distribution of patients by interval from surgery to the start of adjuvant chemotherapy

Table 1: Patient characteristics by interval from surgery to adjuvant chemotherapy

Some cases had missing data; the number of missing cases is not shown in the table.

#P value for different distribution in 3 groups is tested by heterogeneous x2. 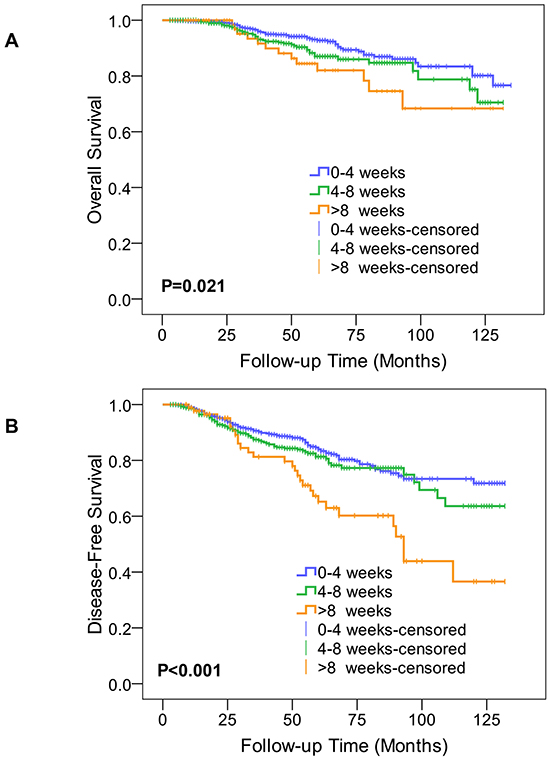 Figure 2: Kaplan-Meier plot for overall survival and disease-free survival according to interval between surgery and initiation of adjuvant chemotherapy. 2A shows the Kaplan-Meier curves for overall survival for the three groups: 0 to 4 weeks, 4 to 8 weeks, and longer than 8 weeks from definitive surgery to start of adjuvant chemotherapy. 2B is for disease-free survival.

Method for Cox proportional hazards analysis: Enter all the variables.

#Adjusted for all the factors listed in the table.

Table 3: Influence of time to adjuvant chemotherapy on disease-free survival in different subtypes

In 1982, a report from M.D. Anderson hospital showed that there was no trend for longer delay in treatment to be associated with shorter DFS according to the length of delayed time (<10 weeks, 10-13, 14-17, and ≥18 weeks). However, poor prognosis patients with >14 weeks delays had significantly shorter disease-free interval [10]. Another analysis of the International (Ludwig) Breast Cancer Study Group Trials showed that, early initiation of systemic chemotherapy might improve outcome in premenopausal patients with ER-negative breast cancer but not in those with ER-positive tumors [7]. In the era of molecular subtype, a recent study indicated that delayed chemotherapy was associated with worse outcomes among patients with TNBC and trastuzumab-treated HER2+ patients [9], suggesting that a delay in the initiation of adjuvant chemotherapy could be dangerous for patients with aggressive subtypes.

Our study has some limitations. First, this study is limited by the nonrandomized and retrospective nature. Our results need further validation in other population. Actually, the cycle number of chemotherapy, completion rate for adjuvant chemotherapy, as well dose reduction, were all the key determinants of survival, and should be adjusted. However, the retrospective data could not collect sufficient information. Second, some subtypes such as TNBC have small number size of samples and the results are statistically underpowered. Moreover, longer follow-up time is needed, particularly for patients with luminal-A tumors, who had a recurrence peak at 5 years after surgery rather than at 2 to 3 years post-surgery [15].

During 2003 to 2006, there were 2,203 consecutive patients who were diagnosed as stage I-IIIa breast cancer and treated surgically in FUSCC. Patients with stage IV disease are generally treated with palliative chemotherapy and were excluded from this study. The preoperative examination, surgical treatment, pathological evaluation, and adjuvant treatment strategy had been described in detail elsewhere [16]. Among them, 639 were excluded for following reasons: 451 receiving no adjuvant chemotherapy, 65 having neoadjuvant chemotherapy, and 123 receiving old regimen (e.g., CMF) or oral chemotherapeutic regimen only (e.g., capecitabine). The chemotherapeutic regimens used in this study were mainly anthracycline-based or anthracycline/taxane-based. None of the HER2+ patients received adjuvant anti-HER2 therapy such as trastuzumab. For the remaining 1,564 cases, 156 patients were further excluded because of short follow-up time (less than 6 months) or insufficient cycle number of chemotherapy (less than 4 cycles), and the final 1,408 patients made the analysis cohort. They were divided into 3 groups according to the time from surgery to adjuvant chemotherapy: less than or equal to 4 weeks (group 1, n=871), 4-8 weeks (group 2, n=446), and more than 8 weeks (group 3, n=91). Table 1 displays the basic patient characteristics. Because data for tumor grade were lacking in many cases, we did not include this variable in our analysis. Tumor stage could be judged by tumor size and lymph node status which were shown in Table 1.

The outcomes of interest were DFS and OS. DFS was calculated from surgery to the first event of relapse (local, regional, and/or distant), contralateral invasive breast cancer, or death in the absence of relapse. OS was calculated from surgery to death from any cause. All the patients should be followed at least for 6 months to maximize the reliability of vital status and recurrence data. The median follow-up time was 72 months (ranging from 6 to 132 months). DFS and OS curves were constructed using Kaplan-Meier method and compared by log-rank test. Multivariate analysis was performed with Cox proportional hazards analysis. Two-sided P<0.05 was considered statistically significant. Statistical analysis was performed using Stata v.14.0 (Stata Corporation, College Station, TX) and SPSS 17.0 (SPSS Inc, Chicago, IL).

This work was supported by National Natural Science Foundation of China (81001169), Training Plan of Excellent Talents in Shanghai Municipality Health System (XYQ2013101), Research and Innovation Project of Shanghai Municipal Education Commission, and the Shanghai Key Laboratory of Breast Cancer (12DZ2260100). The funders had no role in the study design, data collection and analysis, decision to publish, or preparation of the manuscript.

20. Goldhirsch A, Wood WC, Coates AS, Gelber RD, Thurlimann B, Senn HJ. Strategies for subtypes--dealing with the diversity of breast cancer: highlights of the St. Gallen International Expert Consensus on the Primary Therapy of Early Breast Cancer 2011. Ann Oncol. 2011; 22:1736-1747.