While programmed cell death 1 (PD-1) inhibitors have shown clear anti-tumor efficacy in several solid tumors, prior results in men with metastatic castration resistant prostate cancer (mCRPC) showed no evidence of activity. Here we report unexpected antitumor activity seen in mCRPC patients treated with the anti-PD-1 antibody pembrolizumab. Patients with evidence of progression on enzalutamide were treated with pembrolizumab 200 mg IV every 3 weeks for 4 doses; pembrolizumab was added to standard dose enzalutamide. Three of the first ten patients enrolled in this ongoing phase II trial experienced rapid prostate specific antigen (PSA) reductions to ≤ 0.2 ng/ml. Two of these three patients had measurable disease upon study entry; both achieved a partial response. There were three patients with significant immune-related adverse events. One had grade 2 myositis, one had grade 3 hypothyroidism, and one had grade 2 hypothyroidism. None of these patients had a response. Two of the three responders had a baseline tumor biopsy. Immunohistochemistry from those biopsies showed the presence of CD3+, CD8+, and CD163+ leukocyte infiltrates and PD-L1 expression. Genetic analysis of the two responders revealed markers of microsatellite instability in one. The surprising and robust responses seen in this study should lead to re-examination of PD-1 inhibition in prostate cancer.

In 2012, a phase I study of PD-1 inhibition with nivolumab in cancer patients showed activity in melanoma, renal cell and non-small cell lung cancer [1]. Seventeen patients with castration-resistant prostate cancer (CRPC) were included in the study, but there were no objective responses in that group. Since that study, PD-1 inhibition has demonstrated improved survival in phase III studies for non-small cell lung cancer [2, 3], renal cell carcinoma [4], melanoma [5, 6] and bladder cancer [7]. However, given the initial findings in the phase I study and the paucity of PD-L1 staining of previously reported in prostate cancer tissue [8], as well as two negative studies of ipilimumab in CRPC [9, 10], there has been little interest in the examination of this class of immunotherapies in prostate cancer.

We previously reported on two CRPC patients who were exceptional responders to immunotherapy and hypothesized that the immune modulatory actions of androgen receptor blockers may enhance immunotherapy [11-17]. We therefore developed a phase II study to evaluate the efficacy of immuno-hormonal therapy with enzalutamide and the PD-1 inhibitor pembrolizumab in men with metastatic CRPC. Early results from the first 10 patients enrolled on this study are reported here.

The first ten subjects were enrolled from March 2015 to January 2016. Baseline characteristics are presented in Table 1. As of May 19, 2016, the median number of cycles was 4 (range 2-8). The median follow up was 30 weeks (range 16-55). One patient received pembrolizumab retreatment.

Of the ten patients enrolled, three demonstrated significant antitumor activity (Table 2). Starting from serum PSA of 46, 71, and 2,503 ng/ml, these three patients had a near complete PSA response, reaching a serum PSA of ≤ 0.1 ng/ml. Two of these three patients had measurable soft tissue disease and both had a partial response (Figure 1) with one of these patients experiencing a response in liver metastases. Two of the three responders discontinued opiate analgesics and reported resolution of cancer related pain. These three patients remain free of progression at 30, 55, and 16 weeks of follow-up. Of the remaining 7 patients, three had stable disease of 30, 47 and 50 weeks, which are ongoing, while the remaining 4 patients did not have evidence of clinical benefit. One of the patients without benefit died of prostate cancer.

* All responding patients remain on study. 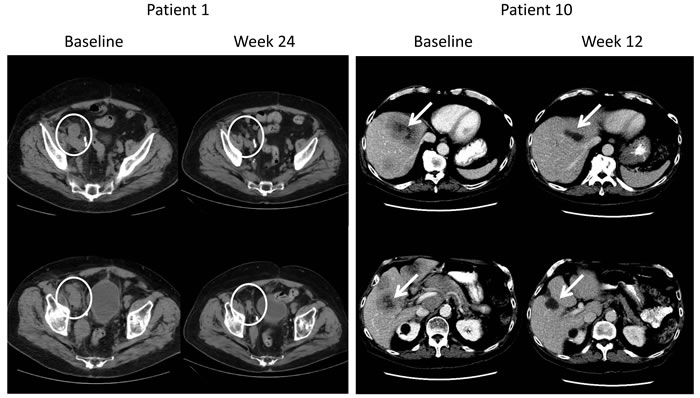 Expected immune toxicities were observed (Table 3). One patient had grade 2 myositis, which resolved with a steroid taper, and pembrolizumab was permanently discontinued. One patient experienced immune-mediated grade 3 hypothyroidism and permanently stopped study treatment. A third patient developed hypothyroidism of uncertain etiology after 2 doses of pembrolizumab. Other adverse events (Table 3) were not judged to be treatment related. Notably, there was no correlation between anti-tumor activity and immune related adverse events. None of the responders had an immune related adverse event.

Correlative studies: Two of the three responders had a baseline tissue biopsy (i.e. prior to pembrolizumab), and we evaluated the extent of leukocyte infiltration in these biopsies, which were of a lymph node and liver (Figure 2). We detected CD3+CD8+ T cell and CD163+ macrophage infiltrates along with PD-L1 expression in both patients. However, the extent of leukocyte infiltrates and PD-L1 expression were variable. For example, in the lymph node biopsy, pronounced T cell and macrophage infiltrates were detected in and around the tumor. We also observed marked PD-L1 staining that appeared to be expressed on CK+ cells. While we also detected pronounced leukocyte infiltration in the liver biopsy, the PD-L1 expression appeared to be associated more closely with infiltrating leukocytes rather than CK+ cells. Taken together, these data provide evidence of pre-existing leukocyte infiltration in the liver biopsy in one of the responders. The lymph node biopsy is more difficult to interpret since these cells would be expected to reside there, but the staining for lymphocytes was robust in the tumor deposit itself. Genetic analysis revealed microsatellite instability (MSI) in the baseline biopsy of one of the two responders. Neither of the two non-responders had MSI. 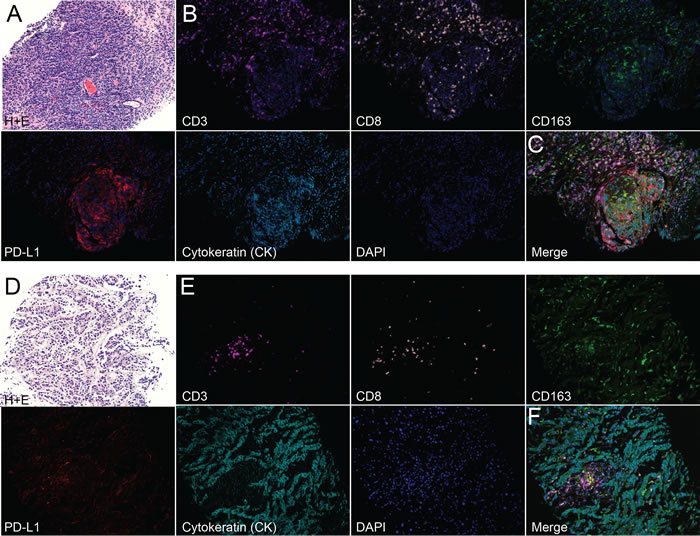 These data show that PSA and objective clinical responses to PD-1 blockade occur in prostate cancer patients progressing on enzalutamide. These results stand in contrast with those observed in the initial phase I experience with nivolumab. There are several possible explanations for this possible discrepancy.

One explanation for this discrepancy could be the agents employed, i.e. our study used the humanized anti-PD-1 antibody pembrolizumab whereas earlier work used the fully human IgG4 antibody nivolumab. Since responses to these two agents have generally been quite comparable in other cancers, i.e. melanoma and NSCLC, this seems unlikely, however at this stage we cannot exclude the possibility that some heretofore unanticipated differences between these two agents that are relevant to prostate cancer exist [2, 3, 5, 6, 18].

A second possibility involves the disease state, in the prior phase I study patients could have received up to five prior treatments for mCRPC, whereas here patients could not have had prior chemotherapy for mCRPC and thus might have had fewer previous treatments and an ECOG status ≤ 1.

Although results are conflicting, there are considerable data showing that androgen-ablation may augment an anti-tumor immune response. Enzalutamide therapy represents a more potent form of androgen suppression and may therefore be associated with previously under-appreciated immune modulatory effects. Indeed, an interesting study by Bishop et al. showed PD-L1 expression in tumor cell lines resistant to enzalutamide [21]. Those data would be consistent with the notion that responses to immunotherapy might be more common in men progressing on enzalutamide - indeed our prior case report showed an objective response to a different immunotherapy (sipuleucel-T) in precisely that setting [13].

In summary, these data provide, for the first time, evidence for meaningful clinical activity for PD-1 blockade in men with mCRPC. Although our study is limited by the small numbers of patients, the robust nature of these responses is notable, i.e. currently approved agents for mCRPC generally do not produce PSA reduction to ≤ 0.2 in the post-enzalutamide setting. Responses in liver metastases are also relatively uncommon with AR targeting drugs or cytotoxic chemotherapies. Additional work will be required to further determine the frequency, depth and duration of response in this setting; our ongoing study should provide additional data in that regard, and future studies are in the planning stages.

This is a single-institution, single-arm, phase II study. Male patients aged 18 years or older had histologically or cytologically confirmed adenocarcinoma of the prostate, at least one distant metastatic lesion, castrate levels of testosterone (testosterone < 50 ng/dl), Eastern Cooperative Oncology Group (ECOG) performance status of 0 or 1, and adequate organ function. They must have had a prostate specific antigen (PSA) response to enzalutamide, which was defined as a PSA decrease of ≥ 50%, and at the time of enrollment must have demonstrated progression on enzalutamide as defined by Prostate Cancer Working Group Criteria 2 and could have either PSA or radiographic progression, but not clinical progression (i.e. pain). They could not have received chemotherapy for castration resistant disease, but prior chemotherapy for castration sensitive disease was permitted. They could have received prior abiraterone or sipuleucel-T. Patients could not participate if they had known HIV, hepatitis B, hepatitis C or brain metastases. They could not have active autoimmune diseases that required systemic treatment within the past 3 months, or a documented history of clinically severe autoimmune disease that required hospitalization or significant medical intervention. Prior exposure to PD-1, PD-L1 or CTLA-4 inhibitors was not allowed. Patients with metastatic deposits amenable to biopsy were biopsied for correlative studies.

All patients were continued on enzalutamide 80-160 mg orally per day. Pembrolizumab was administered as a dose of 200 mg IV every 3 weeks for four doses. Dose delays for toxicity were permitted, but there were no dose reductions. Clinical and laboratory status was assessed every 3 weeks during active treatment and then every 6 weeks until disease progression that required a change of antineoplastic therapy.

Tumor assessments by radiographic imaging (computed tomography of the chest, abdomen, pelvis and Technitium-99 nuclear medicine bone scintagraphy) were performed every 12 weeks and serum PSA was measured every 3 weeks during active treatment with pembrolizumab and every 6 weeks in active follow up. If stable or responsive disease was observed, retreatment with pembrolizumab 200 mg IV every 3 weeks for four doses was permitted upon disease progression.

To detect antitumor activity, we chose the primary endpoint of PSA response, which was defined as a confirmed PSA decline of ≥ 50%. Secondary endpoints included objective disease response by radiographs, PSA progression free survival, and overall survival.

The primary analysis endpoint was PSA response rate. This study was designed to ensure a 90% power (two-sided α = 0.05) to reject the null hypothesis of no response to pembrolizumab. The alternate hypothesis is a 25% response rate. The sample size to achieve that is 28. The unexpected activity noted here prompted this early report while the study continues.

This study is registered on clinicaltrials.gov (NCT02312557) and is being performed under all applicable regulatory guidelines.

We would like to thank Alice Fung, Eric Foss and Bryan Foster for their expertise in doing tumor biopsies for research.