Cancer stem cells(cancer initiating cells) have become increasingly important in the treatment of malignant tumors. CD44 in particular has been identified as a marker for stem cells in colon cancer, which is a high-morbidity tumor. However, many details remain unknown, including identification of the relevant exon. The elucidation of these details could lead to the development of new therapies and improvements in prognosis. We report our findings on the importance of CD44 variant exon 9(v9) of stem cells in colon cancer.

Using the anti-CD44 standard form(s) antibody, as well as antibodies for each of the CD44 variant exons, we studied colon cancer cell lines by examining stained images of stem cells in the crypt of normal colon mucosa. Using the anti-CD44v9 antibody that fits the normal colon mucosa stem cells, we screened cells using flow cytometry to examine colony formation, resistance to anticancer drugs, and tumor mass formation after subcutaneous implantation in mice.

The incidence of colon cancer is high among all malignant tumors[1,2]. In many cases, colon cancer spreads hematogenously to the liver and lungs. The elucidation of this mechanism may advance the development of new therapies and improve survival rates. To date, molecular biological research has been conducted on metastasis of colon cancer to the liver, and several molecular target drugs have been used in clinical settings[1,3].

CD44, in particular, is a well-known marker for colon cancer stem cells. The gene, located on the short arm of chromosome 11, has a transmembrane structure, allowing at least 10 exons to be inserted into the extracellular domain near the transmembrane domain through an alternative splicing mechanism. A variant exon(v), which differs from the original exon, is inserted on the basis of tissue function[14]. It is involved in adhesion between cells and the extracellular matrix, cellular motion, and growth/invasion/metastasis of cancer cells[15,16]. However, the exon that plays the central role in cancer stem cells remains unknown. According to the recent report, hematogenous metastasis is likely to accompany the expression of the proteins inserted with CD44 variant exon 6 or CD44 variant exon 9(v9) in the primary foci of gastric and colon cancer cells[17-19]. According to a previous publication, breast cancer stem cells with CD44 protein expression are resistant to radiotherapy owing to an uncharacteristic rise of reactive oxygen levels in the cell[20]. A recent report has shown that the binding of CD44 variant exons (8, 9, and 10) to xCT proteins that transport cystine/glutamate on the cell membrane accelerates the formation of reduced glutathione and inhibits accumulation of reactive oxygen in cancer cells, thereby suppressing the activation of oxidative stress[21].

As discussed above, the CD44 molecule family is projected to be relevant at various levels of malignancy in tumors. In this study, we examined the stained images of stem cells from normal colon mucosa to explore the relationship between colon cancer stem cells and the CD44v9 isoform, which is considered important in this type of cancer. 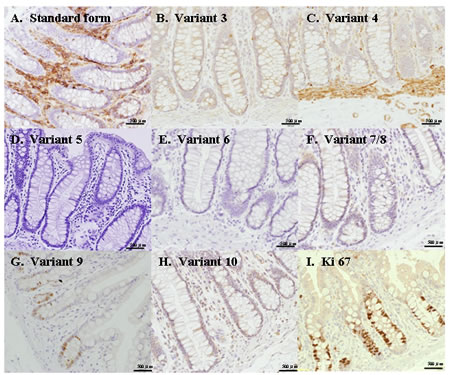 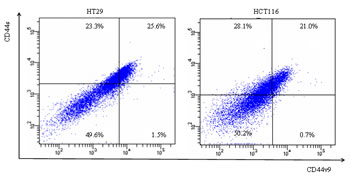 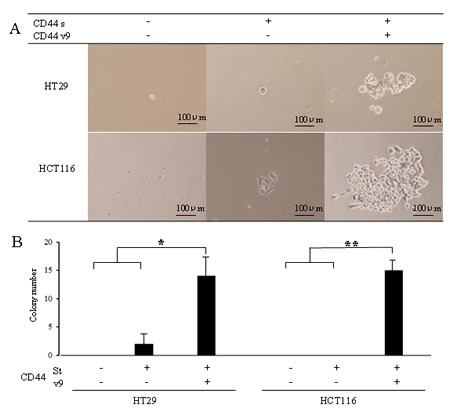 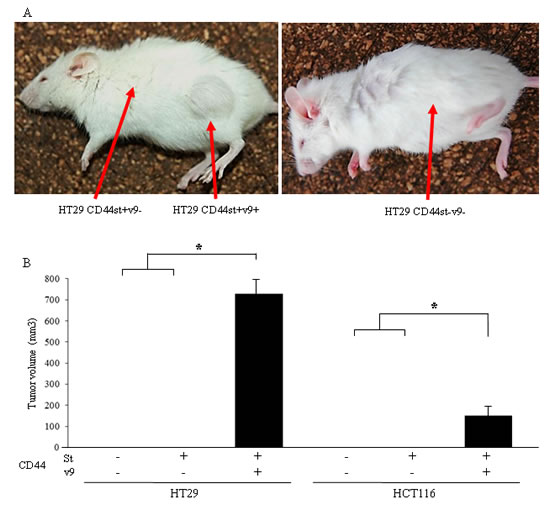 Figure 4: Colon cancer cells stained for ANNEXIN-V using by fluorescence microscope. A.Photograph of cells stained for ANNEXIN-V. Colon cancer cells(1x104) sorted to CD44s[+]v9[+], CD44s[+]v9[-], CD44s[-]v9[-] incubated in the presence of each concentration of 5-FU for 3 days. After incubating with annexin-V-Alexa568, we detected red cells under a fluorescent microscope. B. Result of living ratio against anticancer drug: 5-FU. After 72 hours of exposure, we detected non-red cells under a fluorescent microscope. Results are presented as the mean±SD (n=4). Left HT29 cells. Right HCT116 cells. 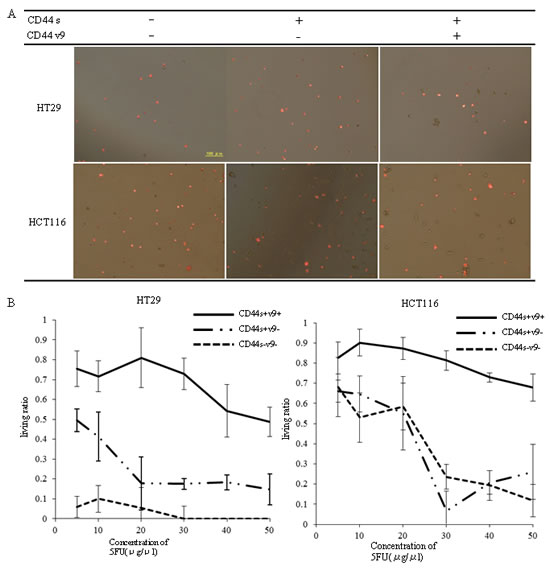 Figure 5: Evaluation of the tumorigenic potential of isolated CD44s and CD44v9 cells. (A) Photograph of a mouse taken 4 weeks after HT29 cells transplantation. Each 1.0 × 103 cells which sorted as CD44s[+]v9[+], CD44s[+]v9[-], CD44s[-]v9[-] were injected to NOD-SCID mouse subcutaneously. (B) Tumor volume of isolated CD44s and CD44v9 cells. The tumor size was measured with calipers, and calculated with the formula:(L × W2)/2(L; length of the tumor, W; width of the tumor). Results are presented as the mean±SD (n=4). P values were determined using the by Student’s t-test. Values of < 0.05 were considered statistically significant.*p<0.01

The concept of heterogeneity of cancer cells has recently undergone a major change. At the 2006 American Association for Cancer Research, cancer stem cells were defined as cells that “exist in a tumor, with capability of replicating themselves and generating different types of cancer cells that constitute the tumor tissue[25].” Based on this concept, a hierarchy model was proposed, in which highly oncogenic cancer cells and non-oncogenic cancer cells derived from oncogenic cells might coexist in a tumor tissue[26]. According to this model, the diversity and non-uniformity of cancer cells must be taken into account in planning therapy for full recovery.
The origin of this definition of cancer stem cells was the identification of blood stem cells by Till, MuCulloch, Becker, et al. in the 1960s, suggesting the involvement of stem cell-like cells in cancer growth[27]. In 2007, reports were published on stem cells for colorectal cancer, and CD44 was identified as a cancer stem cell marker. CD44, a transmembrane protein, may display extramembrane insertion of variant exons[28]. CD44 molecules with variant exon insertion have been found in blood cells, various normal tissues, and epithelial cancer cells. In the case of malignant tumors in particular, some variant exons are closely related to metastasis and malignancy, which indicates their importance[14-19]. However, no details about the expression of variant exons in CD44 or cancer stem cells in colon cancer are available.

Accordingly, we examined the expression of variant exons in CD44. First, assuming that stem cells in normal colon mucosa and those of colon cancer use the same exon, we conducted Ki-67 staining to identify the dormant cell at the bottom of the crypt, in which the stem cells of the normal colon mucosa are found. Next, we examined the expression of individual CD44 exons. According to the results, the expression in the Ki-67 stain–negative region was observed only with the vriant exon 9. The immunohistochemical staining of the colon cancer foci revealed that strong expression of the variant exon 9 was likely to cause hematogenous metastasis, and therefore, this exon was considered important[17].

By definition, cancer stem cells must have self-propagating or self-differentiating capability, as well as the capability to withstand the human immune system for survival. A cancer stem cell must also have resistance mechanisms against anticancer drugs and the capability to form tumor masses in immunodeficient mice(5-8). In this context, we compared CD44-positive colon cancer cells that did not contain the vriant exon 9 and those that did. CD44-positive colon cancer cells containing the variant exon 9 had significantly stronger colony–forming and tumor mass–forming abilities and resistance against anticancer drugs. Thus, in CD44 molecules in colon stem cancer cells, the variant exon 9 was considered an exceptionally important factor. Future studies on CD44 molecules and variant exon 9 are warranted for elucidating basic concepts of cancer propagation and drug resistance.

Normal colon tissues were obtained from a patient with primary colon cancer at the First Department of Surgery, University of Fukui, Japan, in 2005.

Cells were washed twice with phosphate-buffered saline. Dissociated cells were stained with fluorescein isothiocyanate (FITC)-conjugated anti-CD44v9 antibody (prepared in our department)[19] and Allophycocyanin [APC]-conjugated CD44s antibody (BD Pharmingen, NJ, USA) and incubated for 30 minutes at 4°C. After washing with PBS, the cells were sorted by FACScan (Becton-Dickinson, CA, USA)

Cells were plated at a density of 1 cell per well in 96 well plates (BD Falcon, USA). We examined the colonies under a microscope every 24 hours.

The cells were seeded in 96 well plates at 1 × 104 cells/well and divided into control and treatment groups [5-Fluorouracl(5-FU) (100 µg/mM)] (Sigma Chemical Co.). After 72 hours of exposure, we detected non-red cells under a fluorescent microscope[23].

Cell necrosis and apoptosis were detected by cytometry using Annexin-V-FLUOS staining Kit (Roche, Germany). Briefly, cells were incubated with annexin-V-Alexa568 for 15 minutes. After cells were washed thrice in PBS, we detected red and non-red cells under a fluorescent microscope.

Differences between two groups were analyzed by Student’s t-test. Values of P<0.05 were considered to indicate statistically significant results.

14. Stamenkovic I, Aruffo A, Amiot M, Seed B. The hematopoietic and epithelial forms of CD44 are distinct polypeptides with different adhesion potentials for hyaluronate-bearing cells. EMBO J. 1991; 10: 343-348.