Esophageal adenocarcinoma (EAC) represents the sixth leading cause of cancer-related deaths and develops in Barret’s esophagus affected tissues. The IGF2 mRNA binding protein IMP2/IGF2BP2/p62 was originally identified as an autoantigen in hepatocellular carcinoma. Aim of this study was to investigate the expression and prognostic role of IMP2 in EAC. Human EAC and Barret’s esophagus tissue showed overexpression of IMP2, particularly in tumors of increased size and in metastatic tissues. Molecular classification based on published gene signatures of esophageal cancer revealed a specific subtype, in which the expression of IMP2 is high. According to GO and KEGG pathway analyses, genes showing highly correlated expression with IMP2 are associated with growth, proliferation, metabolism, inflammation, and cancerous processes. Clustering of EAC samples according to published survival marker genes strongly suggests that IMP2 overexpressing samples show poor survival. Finally, IMP2 expression correlated with short survival in patients with EAC or esophageal squamous carcinoma. Our data indicate that IMP2 might be a useful prognostic marker for Barret’s esophagus and EAC.

Esophageal cancer represents the eighth most common malignancy and the sixth most common cause of cancer-related deaths worldwide. Most cases of esophageal cancers are either esophageal adenocarcinoma (EAC) or squamous cell carcinoma (ESCC). ESCC dominates in Asian countries and EAC in Western countries [1]. EAC is the cancer with the fastest increasing incidence showing a 6-fold increase in the past decades. Esophageal adenocarcinoma has a poor overall 5-year survival rate due to presentation with an advanced disease stage, in which treatment is ineffective. Barrett’s esophagus is an established precursor of EAC, in which the squamous epithelium of the esophagus is affected by metaplastic changes. Patients with Barrett’s esophagus have a 30– to 60-fold increased risk of EAC development [2]. Invasive cancer will develop in almost 50% of patients with high-grade dysplasia who do not undergo esophageal resection [3]. However, in clinical practice diagnosis of the high-risk precancerous lesion Barret’s esophagus and detection of the transition to neoplasia is difficult and needs to be improved [4].

Recently, autoantibodies against the insulin-like growth factor 2 mRNA binding protein (IMP) IMP2/p62, which was originally identified as an autoantigen in a hepatocellular carcinoma patient [5], were shown to be elevated in patients with esophageal squamous carcinoma [6].

Aim of this study was to investigate the role of IMP2 expression in Barret’s esophagus and esophageal adenocarcinoma and to test its prognostic relevance.

IMP2 is overexpressed in Barret’s esophagus and esophageal adenocarcinoma

We investigated IMP2 expression in a large patient cohort (GSE13898) of more than 60 esophageal adenocarcinoma cases. IMP2 was distinctly overexpressed in tumor (Figure 1A) compared to normal tissue. Interestingly, IMP2 was also overexpressed in tissues of the precancerous lesions Barret’s esophagus including low grade and high grade dysplasia tissues (Figure 1A). Barret’s esophagus tissues without dysplasia did not show an altered expression of IMP2 compared to normal squamous epithelium (GSE28302; data not shown). In order to confirm these results on protein level, immunohistochemical staining against IMP2 was performed on a tissue microarray (Table 1). In fact, although IMP2 could be detected in normal esophageal epithelium, expression was distinctly increased in esophageal squamous carcinoma tissues and adenocarcinomas tissues compared to normal and esophagitis tissues (Figure 1B; Table 1; p = 0.0103). In tissues showing severe hyperplasia, increased IMP2 gene expression levels were observed (Figure 1B) compared to mild atypical hyperplasia (Table 1; p = 0.027) and to normal esophageal tissue (Table 1; p = 0.047). 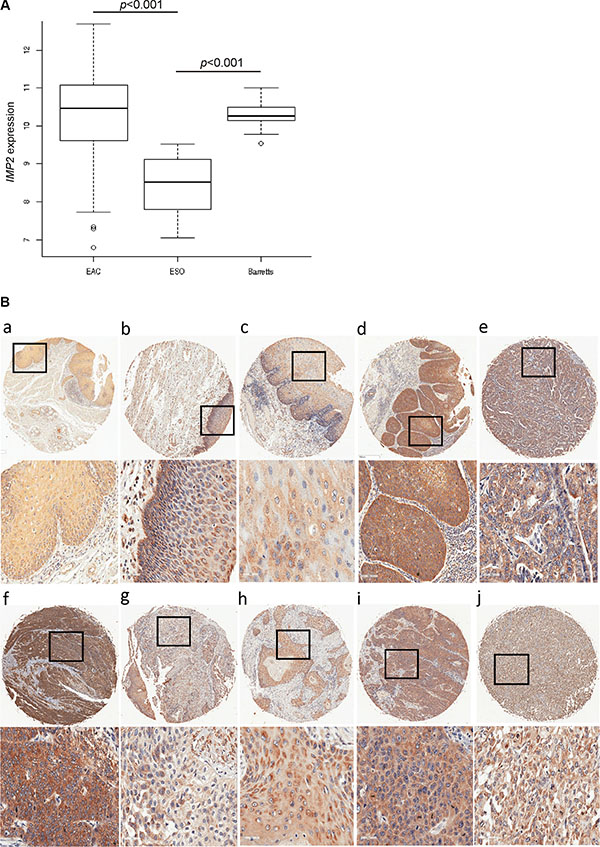 Since molecular subclasses of esophageal cancer have been described in the literature [7], the samples of GSE13898 were clustered according to the marker genes of Greenawalt’s Cluster C [7] being specific for esophageal cancer. Hierarchical clustering revealed two main clusters in the gene expression dataset GSE13898 (Figure 2). SNR analysis revealed that IMP2 as well as 93% of Greenawalt’s Cluster C marker genes belong to the large Cluster 1 confirming that IMP2 overexpression was associated with the gene expression profile of Greenawalt’s Cluster C (Supplementary Table S1). Furthermore, analysis of GO functional annotations showed that genes having strongly correlated expression with IMP2 (threshold 0.85) showed enrichment for processes stimulating growth (Supplementary Table S2). KEGG pathway analysis confirmed an involvement of these genes in signaling pathways, such as MAPK and Jak-STAT pathway, both known to be activated during proliferation and carcinogenesis, as well as in pathways related to metabolism, inflammation, post-translational modifications, protein-processing, and cancer (Supplementary Table S3). 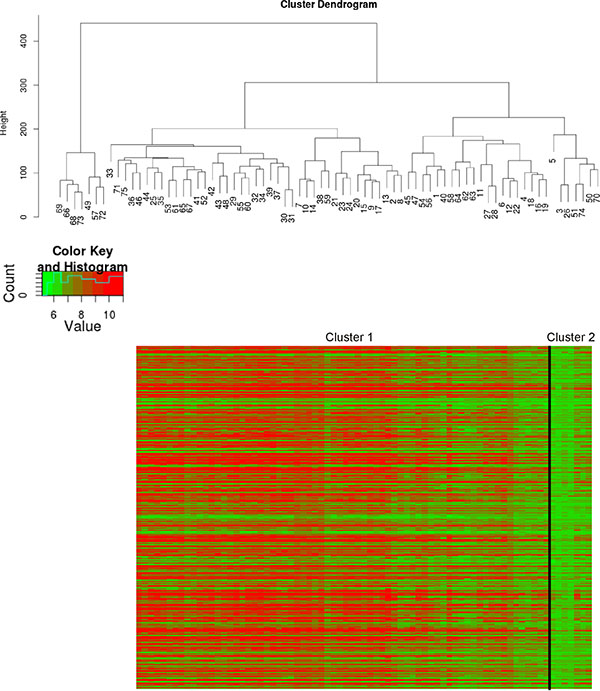 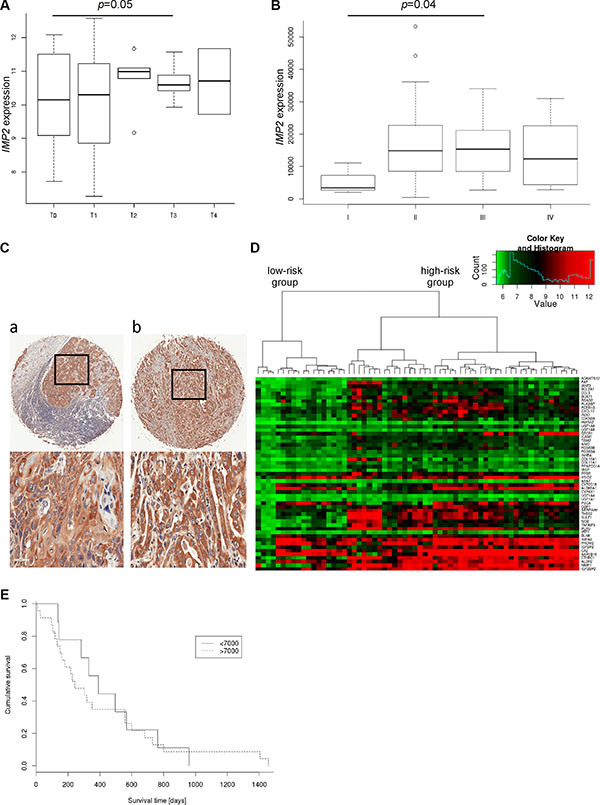 In clinical practice, diagnosis of the high-risk precancerous lesion Barret’s esophagus as well as the transition to neoplasia is rather difficult and its accuracy needs improvement [4]. IMP2 might serve as a useful biomarker to detect high-risk lesions since other suggested biomarkers of Barrett’s esophagus progression were not able to detect dysplasia at predictive accuracy [11].

Molecular profiles, such as gene signatures, could be used for an individualized therapy depending on the pathways activated or inactivated in the tumor tissue. Only few studies describe gene profiles for esophageal cancer so far. IMP2 overexpressing EAC samples were related by us to the published Cluster C, which has been shown to be specific for EAC [7]. This cluster includes the previously published SPARC and proliferation clusters [12, 13]. SPARC expression itself was shown to correlate with poor survival in esophageal cancer [14]. Based on both published marker genes that are predictive for survival [8] and on a Kaplan-Meier survival analysis we showed that high IMP2 expression was linked to short survival. The prognostic relevance of IMP2 expression has been described for other cancer types [15–17].

IMP2 expression in GSE13898 was correlated to overexpression of genes involved in metabolism. This is in line with other studies which reported that IMP2 is involved in obesity and liver steatosis [18–20]. In steatohepatitis IMP2 overexpression led to the accumulation of free cholesterol and the activation of a fatty acid elongase [21, 22]. The observed correlation of IMP2 and signaling pathways such as MAPK and Jak-STAT seems reasonable since IMP2 expression results in increased levels of IGF2 [20], which can activate both of these pathways. A link between inflammation and IMP2 expression was previously shown. The observed relationship between IMP2 and genes regulating post-translational modifications and protein-processing is more likely to be due to co-expression of genes regulating IMP2 activity. The level of activity of mRNA-binding proteins depends on their post-translational modifications [23].

Taken together, our data show that IMP2 might serve as both a diagnostic and prognostic marker for esophageal cancer.

Esophageal carcinoma tissue microarray was purchased from US Biomaxx (#ES804, Rockville, United States). Details of esophageal tissues are given in Table 1. Of the total 80 cases, eight cases did not contain the respective tissue on the slide and thus could not be analyzed. Immunohistochemical stainings against IMP2 were performed as previously described [15] using the Dako Envision DAB Kit (#K4003, Dako, Germany) for antibody detection according to the manufactor’s instructions.

Data analysis and statistics of experimental data were performed using either R software or Origin software (OriginPro 8.1G; OriginLabs). Differential expression analysis was based on the Kolmogorov–Smirnov test. Fisher-exact -test was used for categorical data. Pearson correlation was applied to detect correlations between genes of interest. All tests are two-sided and differences were considered statistically significant when p values were less than 0.05.

For the same GEO dataset GSE13898, unsupervised hierarchical clustering of the expression levels of IMP2 and the 93 marker genes forming the esophageal cancer cluster “C” in [7] was performed. For each marker gene, the signal-noise-ratio (SNR) was calculated as previously described [26] to test the stability of the suggested clustering.

To get a hint about possible survival relations, SNR values for 53 marker genes constructing a risk classifier provided in Pennathur et al. [8] were computed. By unsupervised hierarchical clustering, these authors showed that 59 suggested marker genes divide samples of 64 patients into 2 well-differentiated clusters, in which patient samples show a different survival profile. In the GSE13898 dataset, 53 out of the 59 provided marker genes were present. Similarly, unsupervised hierarchical clustering was applied to the samples of untreated patients with esophageal adenocarcinoma (EAC) using available marker genes in addition to IMP2.

We thank Alexandra K. Kiemer for help and advice.

4. Meining A, Ott R, Becker I, Hahn S, Mühlen J, Werner M, Höfler H, Classen M, Heldwein W, Rösch T. The Munich Barrett follow up study: Suspicion of Barrett’s oesophagus based on either endoscopy or histology only - What is the clinical significance? Gut. 2004; 53:1402.