Overexpression of cytokine receptor-like factor 2 (CRLF2) due to chromosomal rearrangement has been observed in acute lymphoblastic leukemia (ALL) and reported to contribute to oncogenesis and unfavorable outcome in ALL. We studied B-ALL and T-ALL patients without CRLF2 rearrangement and observed that CRLF2 is significantly increased in a subset of these patients. Our study shows that high CRLF2expression correlates with high-risk ALL markers, as well as poor survival. We found that the IKZF1-encoded protein, Ikaros, directly binds to the CRLF2 promoter and regulates CRLF2 expression in leukemia cells. CK2 inhibitor, which can increase Ikaros activity, significantly increases Ikaros binding in ALL cells and suppresses CRLF2 expression in an Ikaros-dependent manner. CRLF2 expression is significantly higher in patients with IKZF1 deletion as compared to patients without IKZF1 deletion. Treatment with CK2 inhibitor also results in an increase in IKZF1 binding to the CRLF2 promoter and suppression of CRLF2 expression in primary ALL cells. We further observed that CK2 inhibitor induces increased H3K9me3 histone modifications in the CRLF2 promoter in ALL cell lines and primary cells. Taken together, our results demonstrate that high expression of CRLF2 correlates with high-risk ALL and short survival in patients without CRLF2 rearrangement. Our results are the first to demonstrate that the IKZF1-encoded Ikaros protein directly suppresses CRLF2 expression through enrichment of H3K9me3 in its promoter region. Our data also suggest that high CRLF2 expression works with the IKZF1 deletion to drive oncogenesis of ALL and has significance in an integrated prognostic model for adult high-risk ALL.

Cytokine receptor-like factor 2 (CRLF2), also known as thymic stromal lymphopoietin (TSLP) receptor, is a type I cytokine receptor. The CRLF2 subunit generates the functional receptor for TSLP by forming a heterodimeric complex with interleukin-7 receptor alpha (IL7Rα) [1]. Both the cytokine and its receptor have been implicated in tumorigenesis [2]. Overexpression of CRLF2 in leukemia has been reported [3–6] and was correlated with poor outcome in pediatric acute lymphoblastic leukemia (ALL) [2, 7, 8]. However, the correlation of CRLF2 expression with the prognosis of adult ALL patients has not been fully determined.

Recently, we reported the IKZF1 global binding profiling in ALL cells and found that IKZF1 regulates the expression of its targets through chromatin remodeling in ALL [14–17]. Our ChIP-seq data showed IKZF1 binding peaks in the promoter region of CRLF2. We also found that CK2 inhibitors could increase the tumor suppressor activity of IKZF1 and act as a functional activator of the IKZF1 protein [14–16]. However, it is still unclear whether and how IKZF1 regulates CRLF2 expression.

CRLF2 is highly expressed in the reported microarray cohort study of ALL patients (Supplementary Figure 1). Here we examined CRLF2 mRNA expression in 100 newly diagnosed adult ALL patients without CRLF2 rearrangement (B-ALL 65 cases and T-ALL 35 cases). We found that the CRLF2 mRNA level is significantly higher in both B-ALL and T-ALL patients when compared to that of normal bone marrow controls (Figure 1A). 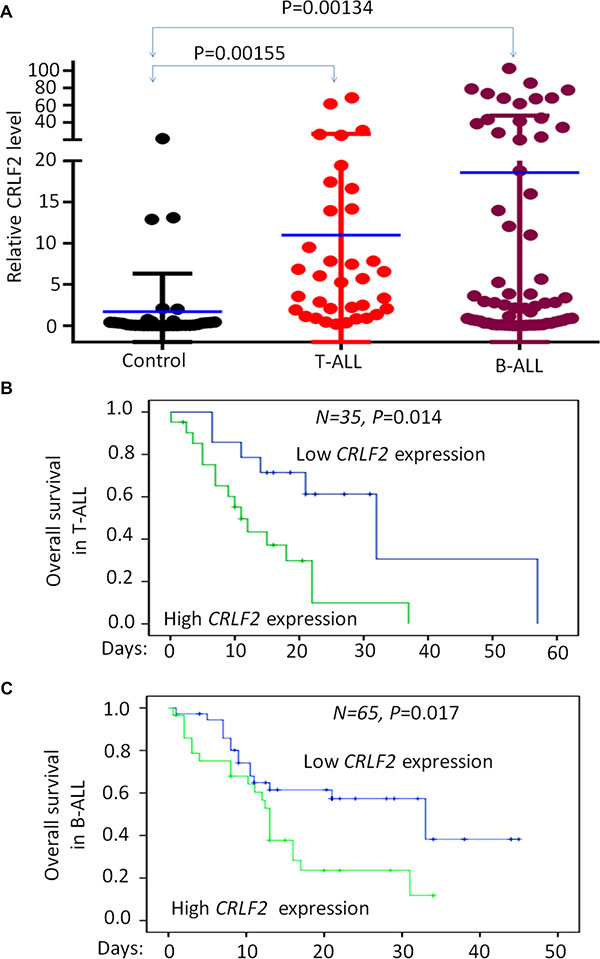 To further address the potential link between high CRLF2 expression with high-risk markers and poor outcome in adult ALL without CRLF2 rearrangement, we analyzed transcription factor motifs in the promoter region of CRLF2. As we expected, many core Ikaros binding motifs (GGGA) were identified in the promoter region of CRLF2 (Figure 2A). Notably, our ChIP-seq data showed strong binding peaks for IKZF1 in the CRLF2 promoter region [14, 15]. qChIP, assays showed significant binding of IKZF1 at the CRLF2 promoter region in both B-ALL (Nalm6 and 697) and T-ALL (CEM and MOLT-4) cells, but very weak binding in U-937 AML cells (Figure 2B). In addition, we observed that IKZF1 suppresses the promoter activity of CRLF2 by luciferase reporter assay (Figure 2C). These data indicate a direct effect of IKZF1 on transcription of CRLF2. Moreover, we found that expression of IKZF1 suppresses CRLF2 mRNA levels in both Nalm6 (Figure 3A) and CEM cells (Figure 3B). Conversely, efficient IKZF1 knockdown increased CRLF2 expression in Nalm6 (Figure 3C) and CEM cells (Figure 3D). Furthermore, treatment of Nalm6 and CEM cells with CK2 inhibitor (TBB) could suppress CRLF2 mRNA and protein levels in a dose-dependent manner (Figure 4A and 4B). CK2 knockdown with shRNA also induced the suppression of CRLF2 expression in Nalm6 (Figure 4C) and CEM (Figure 4D) cells. Importantly, IKZF1 knockdown with shRNA could block the TBB-induced decrease of CRLF2 expression in Nalm6 (Figure 4E) and CEM (Figure 4F) cells. These data indicate that CRLF2 is the direct target of IKZF1 and that IKZF1 suppresses CRLF2 expression in ALL. 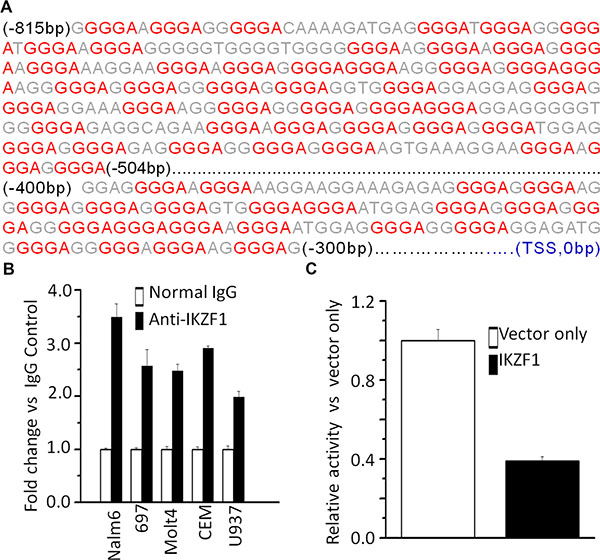 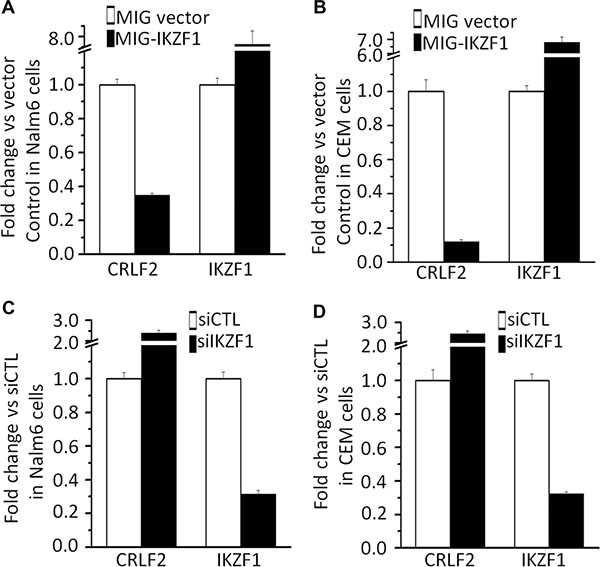 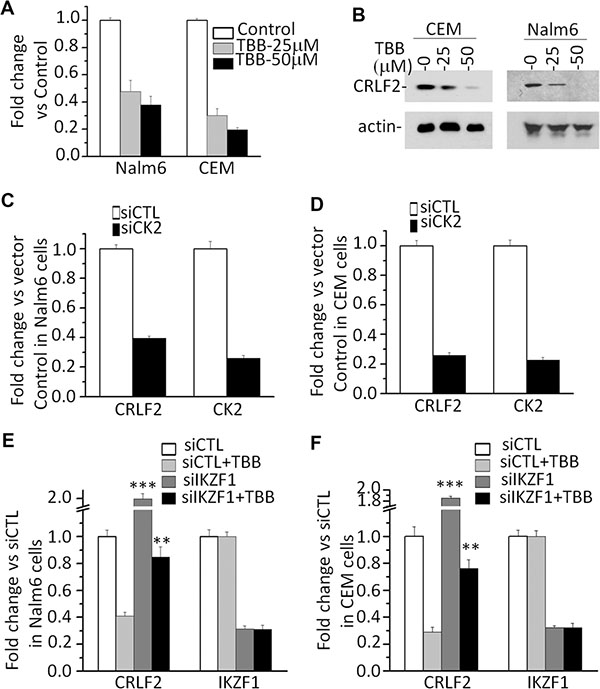 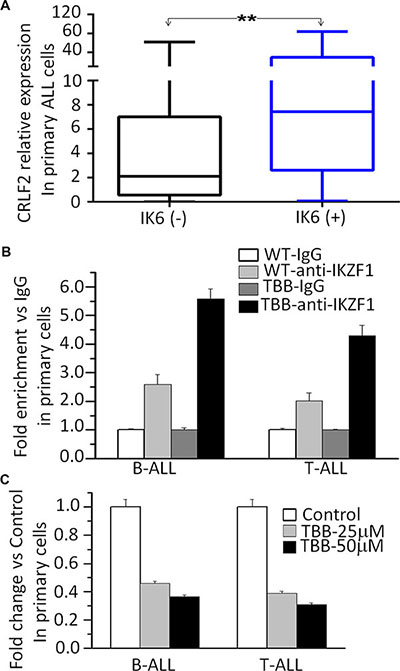 Our previous publications have reported that IKZF1 regulates gene expression through chromatin remodeling [5, 18]. To further explore the epigenetic mechanism by which IKZF1 regulates CRLF2, we performed ChIP assay and amplified the resulting CRLF2 promoter sequences with five pairs of primers as shown in Figure 6A. The results showed that TBB, which enhances IKZF1 function, significantly increases binding of IKZF1 at the CRLF2 promoter as compared with that in untreated Nalm6 B-ALL cells (WT) (Figure 6B). Moreover, TBB also clearly enhances the binding of H3K9me3 (a hallmark of heterochromatin) at the CRLF2 promoter region in Nalm6 cells (Figure 6C). Similar results were observed in the CEM T-ALL cell line (Figure 6D). However, we did not find enrichment of other histone modification markers in the CRLF2 promoter region (data not shown). Further, we found that TBB treatment increases both the binding of IKZF1 (Figure 5B) and the presence of the H3K9me3 histone modification (Figure 6E) at the CRLF2 promoter in primary ALL cells. These data indicated that enhanced IKZF1 activity suppresses CRLF2 expression via increased H3K9me3 in its promoter region. 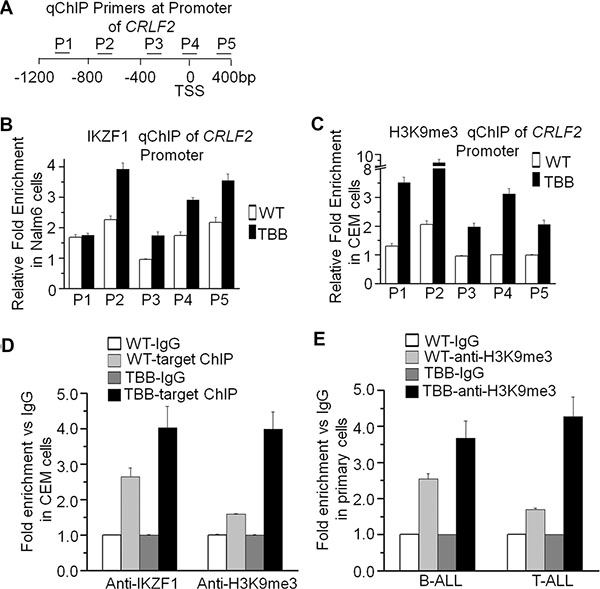 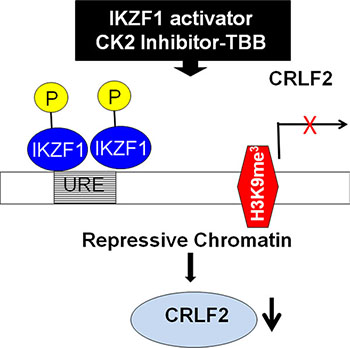 In this cohort study, we focus on ALL patients without CRLF2 rearrangement. We found that high expression of CRLF2 is correlated with unfavorable prognostic factors in the patients. Strikingly, the overall survival was significantly shorter in both T-ALL and B-ALL patients with elevated CRLF2. These observations suggested that CRLF2 overexpression is also correlated with high-risk adult ALL even when the CRLF2 locus has not undergone rearrangement.

We previously reported that IKZF1 regulates gene expression through chromatin remodeling [15, 19]. Here, we observed that increasing IKZF1 activity via the CK2 inhibitor, TBB, increases H3K9me3, a suppressive chromatin marker, at the CRLF2 promoter. This indicates that suppression of CRLF2 expression via chromatin remodeling is also a mechanism underlying IKZF1 anti-oncogenesis in ALL, particularly high-risk ALL.

In summary, we report that CRLF2 is highly expressed and significantly correlated with poor clinical outcome in a cohort of adult ALL patients without CRLF2 rearrangements. We found that Ikaros deletion (characterized by Ik6 expression) is significantly correlated with high CRLF2 expression. We are the first to show that CRLF2 is a direct target of IKZF1, that IKZF1 regulates CRLF2 expression, and that restoration of IKZF1 activity using the CK2 inhibitor, TBB, can suppress CRLF2 expression via chromatin remodeling in ALL. Our results strongly implicate CRLF2 overexpression in conjunction with IKZF1 deletion in the oncogenesis of ALL and suggest that these should be integrated in future prognostic models for adult ALL patients.

Bone marrow (BM) samples from 100 patients with newly diagnosed ALL and without CRLF2 rearrangements (65 B-ALL and 35 T-ALL) were collected between June 2008 and June 2015 at the First Affiliated Hospital of Nanjing Medical University. Thirty normal bone marrow samples were obtained from the volunteer. Written informed consent was provided before enrollment in the study by all patients and volunteers in accordance with the Declaration of Helsinki. The study was approved by the Ethics Committee of The First Affiliated Hospital of Nanjing Medical University, Jiangsu Province Hospital, Nanjing, China. The diagnosis of ALL were made according to the morphologic, immunophenotypic, cytogenetic and molecular criteria of WHO Diagnosis and Classification of ALL (2008).

Cytogenetic analysis, determination of Ik6 [23], CRLF2 rearrangements [3, 10, 21], BCR-ABL fusion gene/Ph chromosome [8, 23] were performed as previously described. qPCR was performed with qSTAR SYBR Master Mix (OriGene) on StepOne Plus Real-time PCR system (Applied Bioscience). In order to quantitate gene expression value in patients’ samples, template standards and primers against Homo sapiens gene CRLF2 (OriGene, USA) and Homo sapiens housekeeping gene GAPDH (OriGene, USA) were obtained from OriGeneTechnologies (Rockville, MD, USA). Gene expression values of the genes of interest (GOI) were achieved in each patient by a formula obtained with a scatter graph of the Ct values from the serial dilutions of template standard following manufacturer’s instruction and as previously reported [16, 24]. The expression level of the GOI was subsequently normalized to the housekeeping gene, expressed as gene expression value of GOI/GAPDH. Each experiment was performed in triplicate. All patients were placed in high or low CRLF2 expression groups (Quartile 1-Quartile 2 vs. Quartile 3-Quartile 4) and the cut-off values were determined by SPSS 17.0 [16].

The qPCR for CRLF2 expression was similarly performed as above in Nalm6 and CEM cells. The results were normalized to those obtained with 18sRNA and presented as fold induction over vector controls. Primers: 18s RNA, Sense:5′-GTAACCCGTTGAACCCCATT-3′, Antisense: 5′- CCATCCAATCGGTAGTAGCG-3′;CRLF2 Sense: 5′- GCCAGACCCGAAATCCATCT -3′, Anti-sense: 5′- CCTGGAAGTTCCCTTGGTGTAT -3′.

The promoter of CRLF2 (–1000 bp to +200 bp) was cloned into pGL4.15 vector (Promega, WI, USA). The transient luciferase assay was performed in HEK293T cells using the Promega luciferase assay reagents and measured with luminometer following the manufacture’s instruction [14, 16]. The firefly luciferase activities were calculated as fold change relative to values obtained from pGL4.15 vector only control cells, and expressed as a percentage of pcDNA3. 1-IKZF1 transfection-induced luciferase activity versus that of pcDNA3.1 vector. All transfection and reporter assays were performed independently, in triplicate, at least three times.

The qChIP assays were performed by incubation of the chromatin with antibodies against IKZF1 [14–16], H3K9me3 (Abcam, USA) or normal rabbit IgG (Abcam) as a control [14–16, 23]. Enrichment of the ChIP sample over input was evaluated by qPCR with three or more replicates, using specific primers in the promoter region of CRLF2 as shown in Supplementary Table 3 (forward: 5′-AGGGGA AGGGAGGGGAAGGGAAAG-3′, reverse: 5′-CCCTTTCCTCCCCTCCCCTCCT-3′). Relative concen- tration of the qPCR product was presented as the fold change of the level of DNA-IKZF1 and DNA-H3K9me3 samples in comparison to controls.

Cell lysate from cells was prepared as previous reported [28]; Twenty microgram protein was boiled in SDS sample buffer for 10 minutes; the resulting samples were run on SDS-PAGE and transferred to the membrane. Membranes were blocked with 5% nonfat dry milk at room temperature for 1 h and then incubated overnight at 4°C with primary antibody (anti-CRLF2, 1:500; Santa Cruz). After being washed, the membrane was incubated with goat anti-rabbit IgG conjugated to horseradish peroxidase (1:3000) at room temperature for 2 h. The blots were developed by the enhanced chemiluminescence technique (ECL Plus, Amersham, Arlington Heights, IL) according to the manufacturer’s instructions.

We divided patients into high or low CRLF2 expression groups (Q1-Q2 vs. Q3-Q4) [16, 24]. Overall median differences between the two groups were evaluated using a Mann–Whitney U-test. Overall frequency differences in the two groups were analyzed using a χ2 test. Survival analysis was calculated using the Kaplan–Meier method. All statistical analyses were performed using the SPSS version 17.0, and P < 0.05 was considered statistically significant.

The experimental data were shown as the mean value with bars representing the standard error of the mean (SEM). Determinations of statistical significance were performed using a Student t-test for comparisons of two groups or using analysis of variance (ANOVA) for comparing multiple groups. P < 0.05 was considered statistically significant.

All the authors declare no conflicts of interest.