Colorectal cancer (CRC) is the third leading cause of death among all human malignancies. CRC causes over 600,000 deaths per year worldwide, with increased morbidity and mortality in recent years [1]. Currently, a major obstacle for CRC treatment is the high rate of growth and metastasis. The metastatic process follows a series of complex and sequential steps: (1) cancer cells successfully escape the primary tumor via local invasion; (2) these cells enter the lymphatic or vascular system, where they survive and translocate primarily through the bloodstream to microvessels in a distant tissue and exit from the bloodstream (extravasation); and (3) the cells grow in response to the foreign microenvironment, and this proliferation results in the formation of a macroscopic secondary tumor [2]. Metastasis is the major cause of death in many cancers, including CRC [3, 4]. However, the molecular mechanisms underlying CRC metastasis remain elusive. Therefore, a better understanding of the specific molecular mechanisms underlying CRC metastasis is required to facilitate the development of new strategies and therapeutic targets for patients with CRC.

Compared with prokaryote genomes, eukaryote genomes encode large amounts of noncoding transcripts. Among these noncoding transcripts are many long non-coding RNAs (lncRNAs), which have important functions in controlling cell proliferation, differentiation, and apoptosis, as well as epigenetic, transcriptional and post-transcriptional processes. lncRNAs, non-protein-coding transcripts longer than 200 nucleotides, account for at least 80% of the transcripts produced by the entire genome [5, 6]. Recent evidence indicates that lncRNAs have a close relationship with tumor occurrence and development and are involved in driving tumorigenesis, growth, invasion, and metastasis [6, 7]. We previously reported that a novel dysregulated lncRNA in CRC, lncRNA-colorectal liver metastasis-associated transcript 3 (CLMAT3), is highly expressed in CRC and is associated with liver metastasis [8]. We also found lncRNA-CLMAT3 expression to be a predictor of patient survival. However, the functions of lncRNA-CLMAT3 in CRC and the detailed molecular mechanisms related to these functions have not yet been elucidated.

In the current study, we focused on how lncRNA-CLMAT3 affects CRC cell proliferation by investigating its expression and the impact of suppressing lncRNA-CLMAT3, and we attempted to clarify the underlying molecular mechanism of these effects. 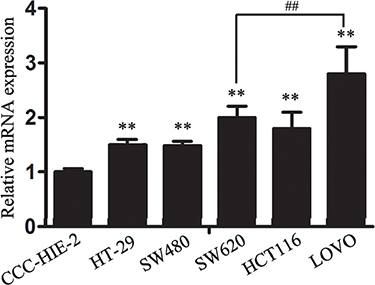 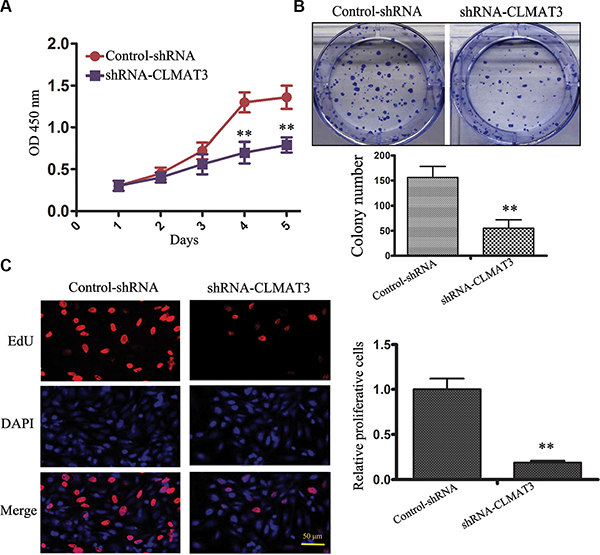 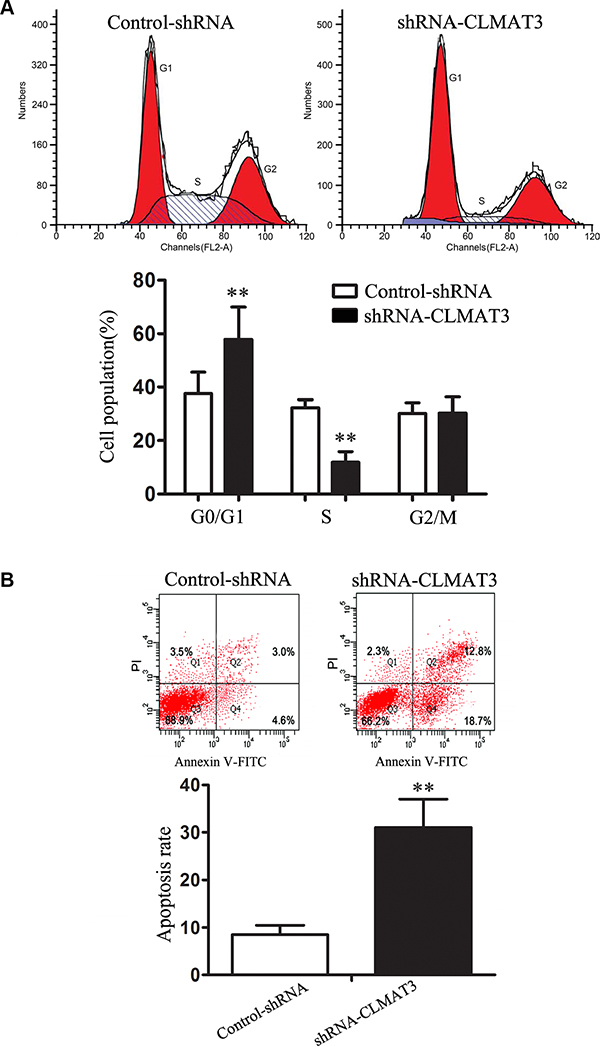 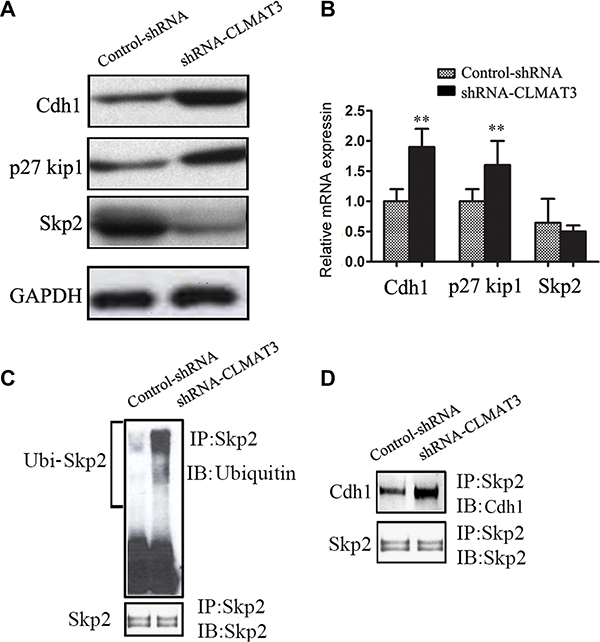 Figure 4: lncRNA-CLMAT3 controlled the expression of master G0/G1 regulators, including Cdh1, CDKN1B (p27Kip1) and Skp2. (A) Western blotting revealed the expression of Cdh1, p27Kip1, and Skp2 in LOVO cells. (B) The relative expression of Cdh1, p27Kip1, and Skp2 mRNA upon lncRNA-CLMAT3 knockdown was analyzed by real-time PCR. **P < 0.01 compared with control shRNA. (C) LOVO cell extracts were immunoprecipitated using antibodies against Skp2 or ubiquitin. Western blotting was used to detect interacting partners. (D) The blots were also probed with antibodies against Cdh1 to analyze interaction between Skp2 and Cdh1.

Anaphase-promoting complex (also called the cyclosome o APC/C) is a ubiquitin protein ligase that, together with Cdc20 and Cdh1, acts on distinct substrates at specific stages during the cell cycle [18]. Some studies have indicated that Cdh1 is required for suppressing proliferation in specific progenitor cells and mammalian cells [11]. Activation of the APC/Cdh1–Skp2–p27Kip1 pathway causes degradation of Skp2 and therefore accumulation of the cell cycle inhibitor protein p27Kip1, which induces G0/G1-stage cell cycle arrest [19]. Liu et al. [20] demonstrated that imatinib mesylate inhibits gastrointestinal stromal tumor cell proliferation through the Cdh1–Skp2–p27Kip1 pathway. Consistent with these previous studies, we found that lncRNA-CLMAT3 knockdown increased Cdh1 expression by accelerating Skp2 degradation, resulting in p27Kip accumulation. These results demonstrate that lncRNA-CLMAT3 knockdown induces cell cycle arrest and apoptosis by affecting the APC/Cdh1–Skp2–p27Kip1 signaling axis (Figure 5). 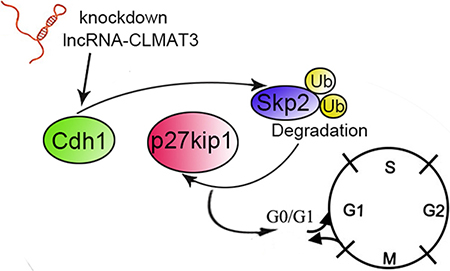 Lentivirus (GV118)-encoding short hairpin RNA (shRNA) targeting lncRNA-CLMAT3 was prepared by GenePharma (Shanghai, China). The interfering sequences corresponding to distinct regions of lncRNA-CLMAT3 are listed in Table S2. A negative control shRNA was also synthesized by GenePharma. LOVO cells were plated in 6-well plates at a density of 1 × 104 cells/well and incubated for 12 h at 37°C. The culture medium was then replaced with fresh DMEM, and the cells were immediately infected with shRNA lentiviruses at a multiplicity of infection (MOI) of one (2 μL). After 24 h of growth at 37°C, the medium was replaced with fresh medium; the cells were cultured for 96 h at 37°C and then harvested for staining. The knockdown efficiency at the mRNA level was assessed using quantitative RT-PCR.

Cells seeded in 96-well plates at a density of 5 × 103 cells per well were transfected with lncRNA-CLMAT3 shRNA or control shRNA, and cell proliferation assays were performed every 24 h using a Cell Counting Kit-8 (Sigma) per the manufacturer’s protocol. The number of viable cells was measured by their absorbance at 450 nm at the indicated time points.

Proliferation of CRC cells was also monitored using a Cell-Light EdU DNA cell proliferation kit (Ribo Bio, Guangzhou, China) according to the manufacturer’s instructions. LOVO cells were seeded in 96-well plates and transfected with lncRNA-CLMAT3 shRNA or the negative control. After 48 h, the cells were stained with 50 μM EdU for 2 h. The cell nuclei were stained with DAPI for 1 h, and the cells were then examined using a florescence microscope (Olympus, Tokyo, Japan).

For the colony formation assay, LOVO cells transfected with lncRNA-CLMAT3 shRNA or control shRNA were plated in 6-well plates at a density of 500/well and maintained for 12 days in a medium containing 10% FBS to allow colony formation, replacing the medium every 3 days. The colonies were subsequently fixed with methanol and stained using 1% crystal violet in 70% ethanol. Visible colonies were counted manually.

Flow cytometric analysis of the cell cycle and apoptosis

LOVO cells transfected with the shRNA targeting lncRNA-CLMAT3 or empty vector were cultured in 6-well plates for 48 h, washed with ice-cold phosphate-buffered saline (PBS), and fixed in cold 70% ethanol overnight at –20°C. The cells were then washed and stained with propidium iodide (PI, Beyotime, China) containing 0.25 mg/mL of RNase A. After incubation in the dark at 4°C for 15 min, the cells were analyzed by flow cytometry (FACScan; BD Biosciences) using MODFIT software. The percentages of various cell cycle phases (G0/G1, S, and G2/M phases) were counted and compared.

Apoptosis was examined using an AnnexinV-fluorescein isothiocyanate (FITC)/PI dual staining kit (KeyGen, Nanjing, China). Briefly, LOVO cells were treated with lncRNA-CLMAT3 shRNA or the control for 48 h and then washed three times in cold PBS. The cells were stained with AnnexinV-FITC and PI in 500 μL of binding buffer in the dark at room temperature for 15 min and quantified by flow cytometry.

LOVO cells transfected with the shRNA targeting lncRNA-CLMAT3 or empty vector were cultured in 6-well plates for 48 h, washed with ice-cold PBS and lysed in RIPA buffer. The lysates were centrifuged at 12,000 rpm for 5 min and incubated in a 1 mL volume with anti-Skp2, -ubiquitin, and -Cdh1 antibodies overnight at 4°C. Protein A/G-conjugated beads (20 μL) were added and incubated for 12 h. The beads were washed three times with RIPA lysis buffer. After centrifugation, the sedimented protein was used for Western blotting.

Data are presented as the mean ± standard deviation (SD). Statistical analysis was performed using SPSS 13.0 software. Differences between groups were analyzed using Student’s t-test when comparing only two groups or one-way analysis of variance when comparing more than two groups. P-values < 0.05 were considered to be significant.