1School of Biomedical Sciences and Pharmacy, The University of Newcastle, NSW, Australia

3School of Medicine and Public Health, The University of Newcastle, NSW, Australia

Despite recent advances in the treatment of colon cancer, the overall survival of patients with metastatic colon cancers remains disappointing [1–3]. Although activating mutations of BRAF (BRAFV600E) are found only in a small proportion of colon cancers, this poses a great challenge in the quest for a better outcome of the patients, in that BRAF mutations, like mutations in KRAS, are associated with resistance of colon cancer to conventional chemotherapeutic drugs and agents targeting the epidermal growth factor receptor (EGFR) [4–6]. In addition, mutations in BRAF are associated with poor patient prognosis [6–8].

Heat shock protein 90 (HSP90) is one of the most abundant molecular chaperones and is essential for folding, stabilization and activation of a large number of proteins [9–11]. In particular, many mutant and overexpressed oncoproteins such as EGFR, CRAF and Akt are client proteins of HSP90 [11, 12]. As such, targeting HSP90 appears a promising approach in cancer treatment [12, 13]. Indeed, a number of HSP90 inhibitors such as AUY922 that do not significantly affect normal cell survival are currently in clinical studies for the treatment of various types of cancers including wild-type KRAS colon cancer [14–16]. Intriguingly, mutant BRAF is a client protein of HSP90, whereas HSP90-mediated chaperoning is not required for stabilization of wild-type BRAF [17, 18]. This suggests that HSP90 inhibitors may be of particular importance in the treatment of colon cancers carrying mutant BRAF.

HSP90-mediated chaperoning of proteins requires recruitment of clients through various co-chaperones [19–21], which function as scaffold proteins binding to HSP90 and its substrates simultaneously thus facilitating their interaction. Among HSP90 co-chaperones is cell division cycle 37 (CDC37) that interacts with a large proportion of protein kinases including cyclin-dependent kinases (CDKs), Akt and EGFR and thus directs their maturation [22–24]. Interestingly, CDC37 can also function as a protein chaperone independently of HSP90 [25, 26]. Nevertheless, it has been recently reported that although CDC37 can stabilize kinase clients independently of a direct interaction with HSP90, the activity of HSP90 is required [27]. It seems that the interrelating relationship between CDC37 and HSP90 in terms of protein chaperoning is highly dependent on client proteins in question. Indeed, CDC37 can compensate for HSP90 in maintaining some but not all protein clients [26]. Importantly, CDC37 itself has protein kinase activity that is important for phosphorylation of a number of its kinase clients [23, 28]. 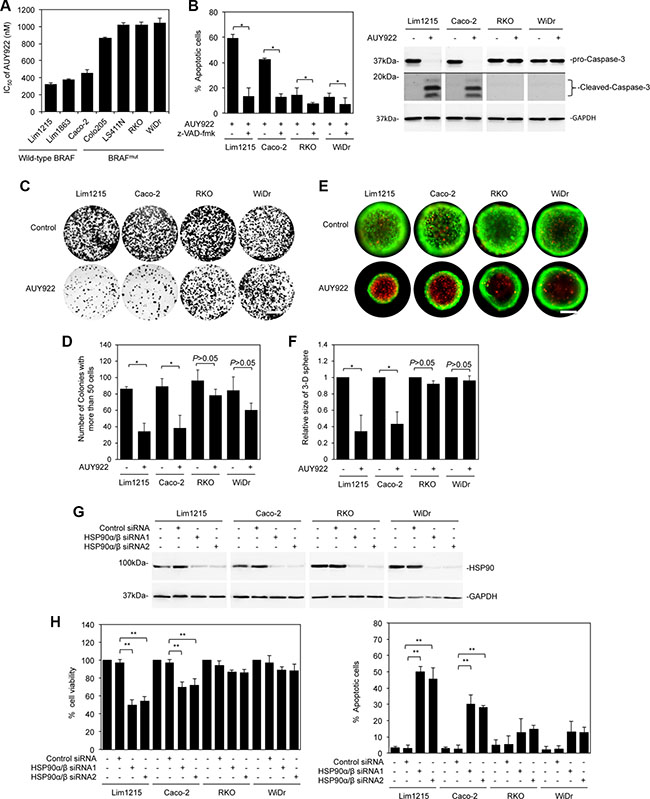 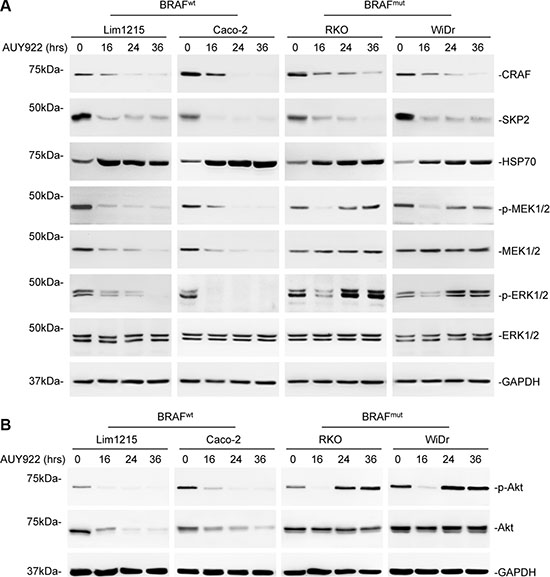 Despite its differential effects on Akt and ERK activation, AUY922 displayed otherwise comparable potency in inhibition of HSP90 in wild-type and mutant BRAF colon cells, as shown by similar degrees of reduction in its clients CRAF and S-phase kinase-associated protein 2 (SKP2) and upregulation of HSP70 induced by the inhibitor (Figure 2A) (29).

To examine the role of reactivation of ERK and Akt in resistance of mutant BRAF colon cancer cells to HSP90 inhibition, we treated RKO and WiDr cells with the MEK inhibitor AZD6244 or the PI3K inhibitor LY294002 before addition of AUY922. Indeed, although AZD6244 or LY294002 alone did not trigger significant cell death in RKO and WiDr cells, it sensitized the cells to AUY922-induced apoptosis (Figure 3A). This was associated with diminution of reactivation of ERK or Akt (Figure 3B). When AZD6244 and LY294002 were applied in combination, killing of mutant BRAF colon cancer cells by AUY922 was further enhanced (Figure 3A). Consistently, siRNA knockdown of MEK1 or Akt rendered RKO and WiDr cells sensitive to AUY922 (Figure 3C–3E). On the other hand, introduction of an active form of MEK1 (myr-MEK1) or an active form of Akt (myr-Akt) attenuated cell death induced by AUY922 in wild-type BRAF colon cancer cells [35, 36]. When myr-MEK1 and myr-Akt were co-introduced, AUY922-induced killing of Lim1215 and Caco-2 cells was abolished (Figure 3F and 3G). Together, these results indicate that reactivation of ERK and Akt plays an important role in resistance of mutant BRAF colon cancer cells to AUY922. 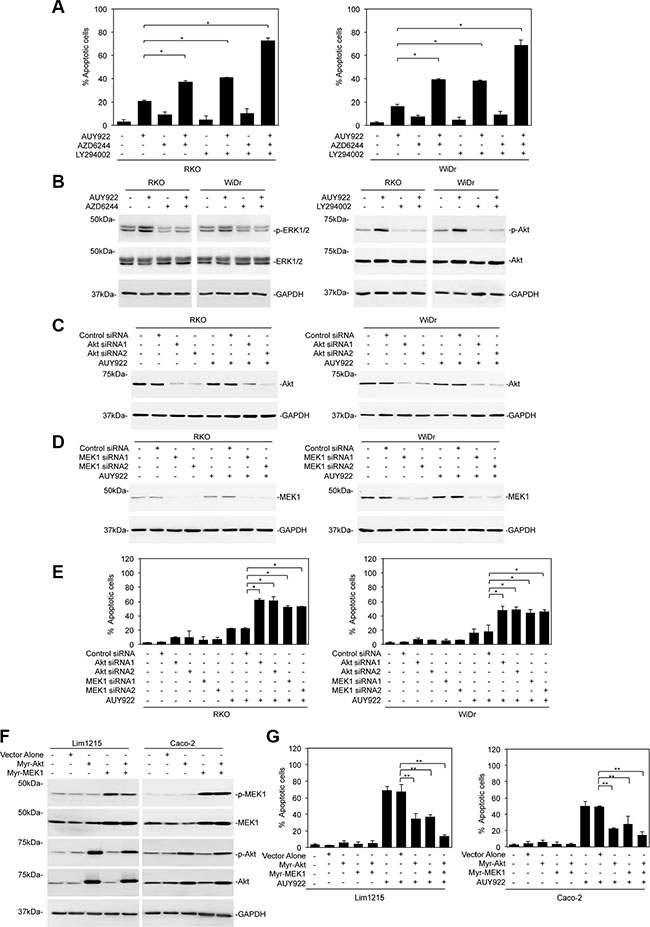 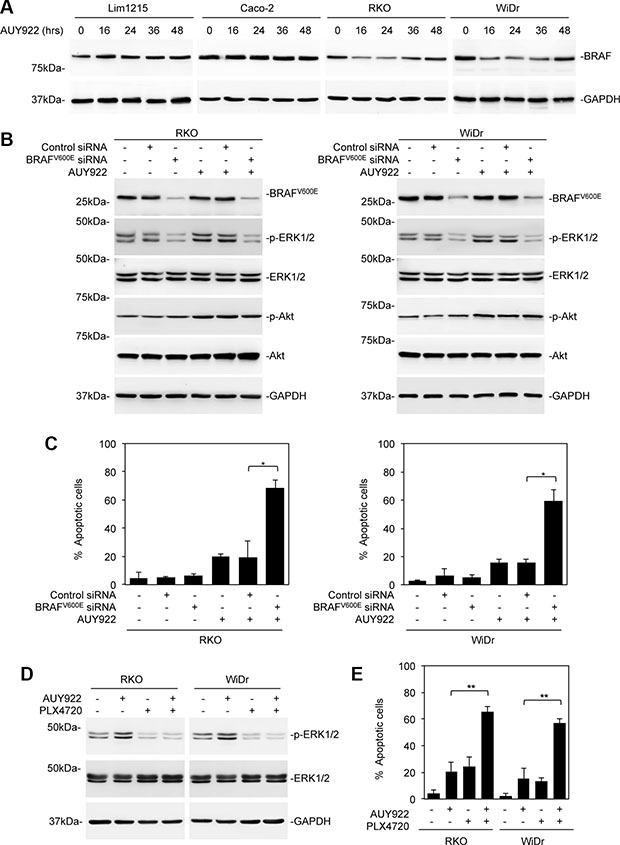 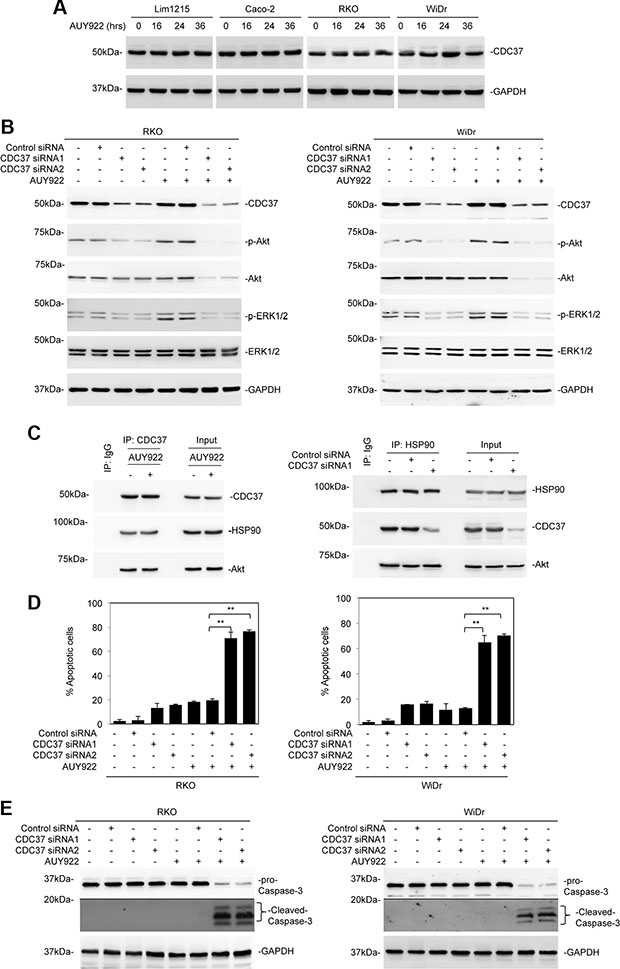 To test the therapeutic potential of the finding that reactivation of ERK and Akt is responsible for resistance of mutant BRAF colon cancer cells to AUY922, we treated RKO and WiDr cells grown in 3-dimensional cultures with AUY922 in the presence or absence of the BRAF inhibitor PLX4720 or the PI3K inhibitor LY294002. While none of the compounds alone impinged on survival of the cells, co-treatment with PLX4720 or LY294002 and AUY922 triggered death of the cells in 3-dimensional cultures (Figures 6A, 6B and Supplementary Figure S3). The combination of PLX4720, LY294002, and AUY922 further enhanced killing of the cells (Figure 6A). As shown in Figure 6C, AUY922 induced cell death in RKO and WiDr cells with CDC37 knocked down grown in 3-dimensional cultures (Supplementary Figure S4). 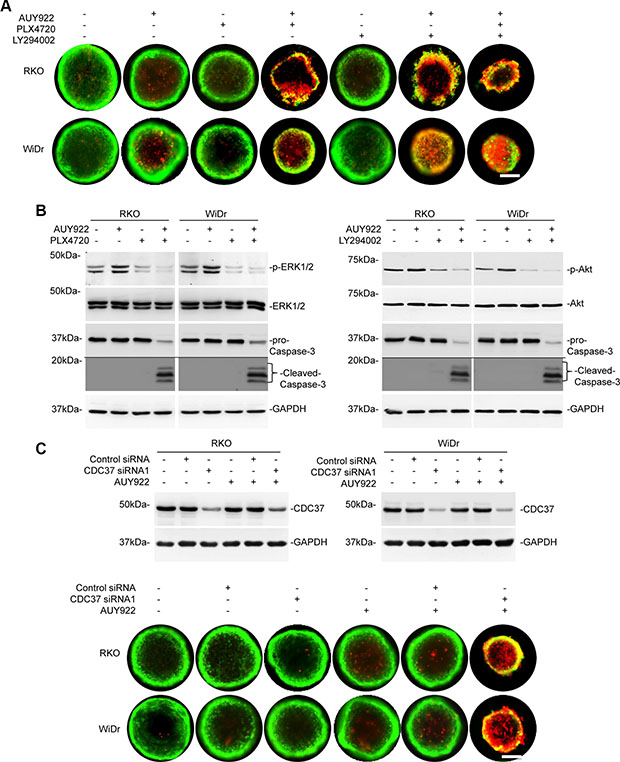 The practical implications of the finding that rebound activation of ERK and Akt is responsible for resistance of mutant BRAF colon cancer cells to AUY922 was confirmed by using cells grown in 3-dimensional cultures. Co-treatment with a BRAF inhibitor or a PI3K inhibitor and AUY922 resulted in destruction of the tumor spheres. In addition, AUY922 triggered killing of mutant BRAF colon cancer cells with CDC37 knocked down in 3-dimensional cultures. These results may reflect more closely the response of mutant BRAF colon cells to the combinatorial approaches, and warrant further preclinical investigation of the combinations in the treatment of colon cancers with mutations in BRAF.

Staining with Annexin V and Propidium iodide was carried out as described elsewhere [29]. In brief, cells were collected, washed twice with cold PBS and re-suspended in Annexin V binding buffer. Cells were then incubated with FITC-conjugated Annexin V and PE-conjugated Propidium iodide for 15 min in the dark followed by addition of binding buffer. Cells were analysed by flow cytometry within 1 h.

Clonogenic assays were carried out as described previously [29]. In brief, cells were seeded at 2000 cells/well onto 6-well culture plates. Cells were then allowed to grow for a further 12 days before fixation with methanol and staining with crystal violet (0.5% solution). Colonies with 50 or more cells were counted under a phase contrast microscope.

The myr-Akt and the myr-MEK1 cDNAs were cloned into the lentiviral expression plasmid pCDH-CMV-MCS-EF1-copGFP (Integrated Sciences, Chatswood, NSW, Australia). Lentiviral packaging was carried out as described previously [50]. Transduction efficiency was monitored by detecting green fluorescent protein (GFP) via flow cytometry.

Western blot was carried out as described previously [51]. Labeled bands were detected by Immun-StarTM HRP Chemiluminescent Kit, and images were captured and the intensity of the bands was quantitated with the Bio-Rad VersaDocTM image system (Bio-Rad, Regents Park, NSW, Australia).

This study was supported by Cancer Council NSW, Australia (RG 15-08), which was awarded to X.D. Zhang. C.C. Jiang and L. Jin are recipients of Cancer Institute NSW Fellowships. X.D. Zhang is supported by a Senior Research Fellowship of NHMRC.