The radioresistance is the key factor to hamper curative effect and survival of nasopharyngeal carcinoma (NPC) patients. Nature triptolide (TPL) has been found to circumvent drug-resistant effect of cancer, but its effect on NPC radioresistance has been rarely studied. In the present study, the 10 Gy-resistant CNE2 subclones (CNE2-SR) were used as a NPC radioresistant model. The IC50 of TPL in CNE2 and CNE2-SR cells was measured by MTT assay, cell cycle was analyzed by flow cytometry, and protein expression was examined by western blot. Our data showed that TPL treatment decreased the percentage of viable cells, and IC50 value in CNE2 and CNE2-SR cells was 23.6 ± 1.41 nmol/L and 31.2 ± 1.16 nmol/L, respectively. Six Gy was a moderate dosage of X-ray for CNE2, and 25 nM TPL was close to IC50 value of CNE2 and CNE2-SR. Six Gy X-ray and/or 25 nM TPL significantly inhibited tumor growth in nude mice. Furthermore, 6 Gy X-ray and/or 25 nM TPL significantly inhibited cell growth and induced cell apoptosis and M/G2 phase arrest in CNE2 and CNE2-SR cells. Moreover, TPL treatment significantly inhibited the expression of GRP78 protein in CNE2 and CNE2-SR cells. These results suggest that TPL may serve as a potential radiosensitizer agent for NPC treatment.

Nasopharyngeal carcinoma (NPC) is a kind of rare epithelial cancer, but it is one of the most prevalent malignancies in southern Chinese populations. However, the clinical outcome and prognosis of NPC remain unsatisfactory. Radioresistance is the biggest obstacle to achieve long-term survival. So it is urgent to screen some novel and effective drugs to treat radioresistant NPC. GRP78 is an ER chaperone protein and major regulator of the unfolded protein response (UPR) [6]. The response of GRP78 to drug-induced ER stress has been well established [6]. GRP78 may be an important biomarker protein for drug resistance.

The efficacy of TPL in NPC therapy and its molecular mechanisms have been poorly studied. In this study, we first examined the IC50 value of TPL in NPC CNE2 and CNE2-SR cells by MTT assay. Then, we further investigated that the effects of TPL on cell proliferation, cell cycle and the expression of GRP78 in both cells.

The radioresistant CNE2-SR from the irradiated CNE2 cells

The 10 Gy dose of X-ray radiation resulted in 95% of cell death in CNE2. After 15 days, the residual cells formed some clones (> 50 cells in each clone). The clones were more resistant than the parent CNE2 in vitro (Figure 1C–1D; Figure 3A) and in vivo (Figure 3D–3E). Then the clones were isolated and cultured as a radiation-resistant sample, CNE2-SR. 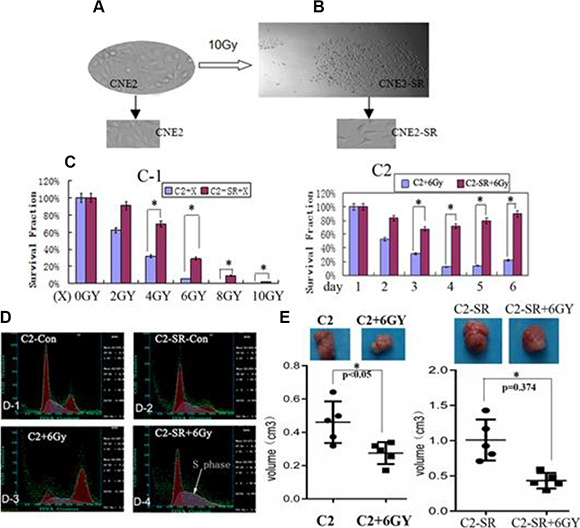 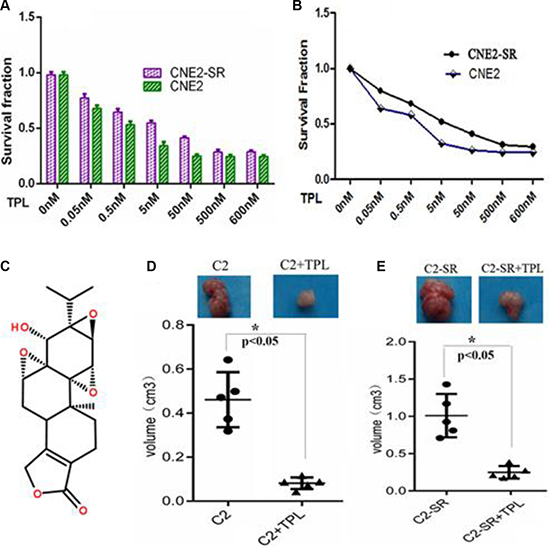 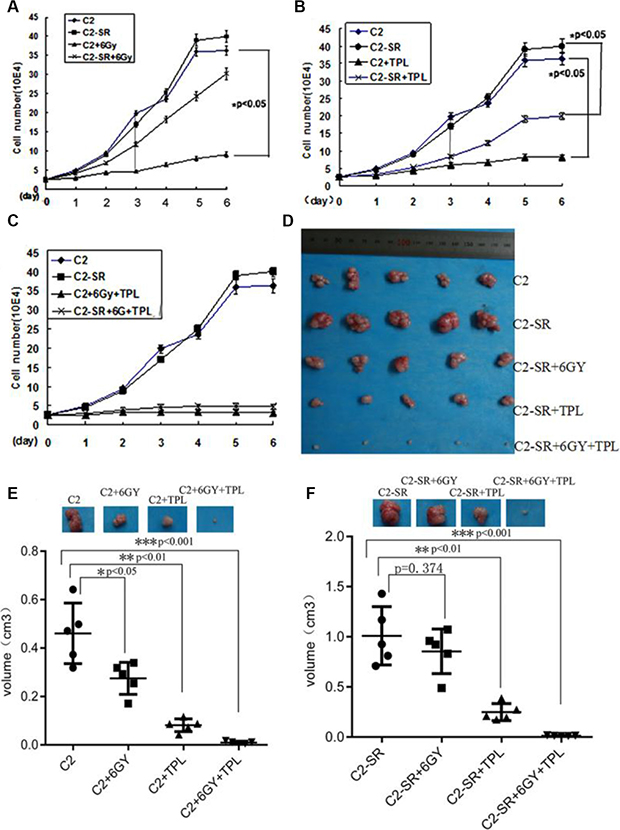 Cell growth analysis in response to TPL and radiation

To confirm the radiosensitizer effect of TPL to CNE2-SR cells, TPL was tested with radiation-resistant CNE2-SR in vivo. The radiosensitizer effects of TPL on NPC radioresistance were tested in nude mice. The combined treatments of 6 Gy X-ray or/and 25 nM TPL significantly inhibited tumor growth of the radioresistant CNE2-SR in nude mice (Figure 3D and 3E). TPL treatment enhanced the anti-tumor effect of X-ray, and circumvented the resistant effect of X-ray in the nude mice transplanted with CNE2-SR cells (Figure 3E). 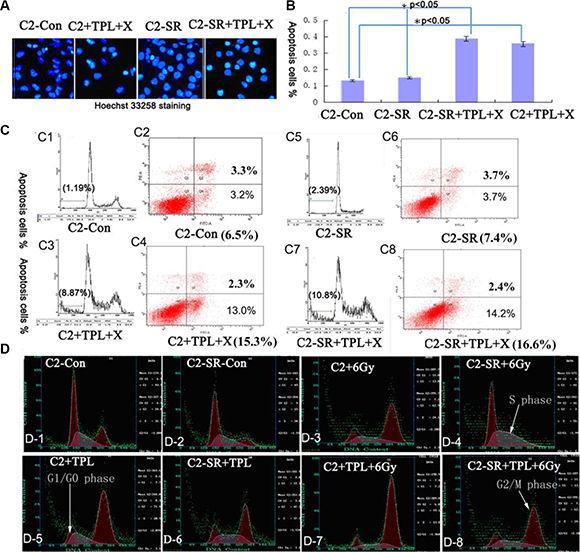 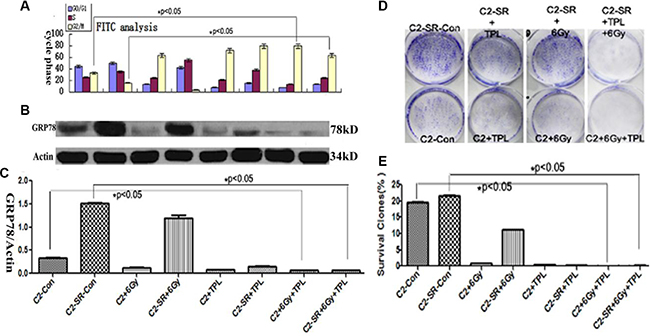 The standard combination of radiotherapy and chemotherapy has improved the efficiency in NPC patients, but radioresistance is still the common causes of biggest obstacle in NPC treatment [7–9]. The survival of irradiated NPC cells is the most common cause for the relapse and metastasis of NPC. In the present study, we established radioresistant CNE2-SR subclones from CNE2 cells by 10 Gy X-ray radiation, which were more resistant to 6 Gy X-ray radiation compared with original CNE2 cells. TPL is a natural drug with anticancer efficacy, and has been used as a good alternative in many cancer treatments. Early in 1972, Kupchan et al. first reported the antileukemic effect of TPL [10]. The combination of TPL and X-ray showed synergistic effects in preclinical animal models [11]. Jacobson et al. [12] found that TPL inhibits pancreatic cancer cell proliferation through reducing the expression of heat shock protein 70. However, the efficacy of TPL in NPC therapy has not yet been addressed.

Our data showed that TPL decreased the percentage of viable cells in the radioresistant CNE2-SR cells. The combination of TPL and X-ray showed synergistic effects and circumvented the resistant effect of X-ray in the nude mice transplanted with CNE2-SR cells. It has been demonstrated that the cells at G2/M phase are most sensitive to radiation, and G2/M phase arrest is one of the major reasons of cell death caused by anti-tumor drugs and radiosensitive reagents [13]. Significant elevation of GRP78 expression in cancer cells is linked to a radioresistant cell type [6–7]. GRP78 is known to induce anti-apoptosis, chemoresistance and radioresistance. GRP78 has been considered as a potential biomarker for therapy-resistance in multiple carcinomas [14–15]. Li et al. found that GRP78 enhances the glutamine metabolism and supports cell survival from glucose deficiency by activating the β-catenin signaling [14], while GRP78 inhibitor OSU-03012/sildenafil could kill brain cancer stem cells [15]. This evidence suggests that the down-regulation of GRP78 may inhibit cell survival. Here we observed that the combined treatments of 6 Gy X-ray and 25 nM TPL could promote cell cycle transition from G0/G1 to G2/M phase in the radioresistant CNE2-SR cells. Moreover, the G2 /M phase arrest and cell apoptosis in CNE2-SR cells accompanied the downregulation of GRP78 protein expression. Hence, we speculate that the elevated GRP78 protein may support cell survival and enhance radioresistance to 6 Gy X-ray radidation in CNE2-SR cells.

TPL has been found to sensitize cancer cells to apoptosis [16–18]. Moreover, a recent study reported that the expression of GRP78 in pancreatic cancer cell lines is downregulated by TPL, leading to cell apoptosis and autophagy [19]. TPL may provide new insight and knowledge for future studies in NPC radioresistant field. Radioresistance is mostly associated with numerous molecular aberrations that characterize glioblastoma, such as enhanced DNA damage repair (DDR) and activation of pro-survival signaling pathways [21]. GRP78 is a critical pro-survival chaperone involved in ER stress linked to the changes in ROS balance secondary to irradiation [22]. Consistently, our results suggest that TPL may trigger apoptosis and induce G2/M phase arrest via inhibiting GRP78. Thus, TPL may serve as a potential chemotherapeutic agent and new radiosensitizer for NPC treatment.

The survival subclones of CNE2 cells to irradiation

CNE2 cells were seeded at a density of 1.0 × 105 cells per 6 cm plate and cultured in RPMI-1640 medium (Gibco BRL) containing 10% heat-inactivated fetal bovine serum (FBS, HyClone) and 1% antibiotics at 37°C in a humidified 5% CO2 incubator. After 24 h culture, the cells were exposed to sublethal 10 Gy dose (300 cGy/min) of X-ray at room temperature using a linear accelerator (2100EX, Varian). Fifteen days after treatment, the residual CNE2 cells were cultured and named for CNE2-SR (CNE2 Survival-Residual subclones). CNE2 cells irradiated with sham were used as a control.

CNE2 and CNE2-SR cells were plated at a density of 4 × 104 cells/well in triplicate in a 6-well plate and exposed to 25 nM of TPL and/or 6 Gy of X-ray. Cell growth was monitored by counting cell number at various time intervals. Three independent experiments performed.

2.5 × 106 cells were treated with TPL (25 nM) and/or X-ray (6 Gy) and harvested after 48 h treatment. Cell pellets were fixed with ice-cold 70% ethanol in PBS at –20°C for 1 h and then centrifuged at 1,500 rpm for 5 min. The pellet was incubated with 0.5% Triton X-100 (Sigma) and 0.05% RNase (Sigma) in 1 mL PBS at 37°C for 30 min and then centrifuged at 1,500 rpm for 5 min. For cell cycle analysis, cell pellets were resuspended in 1 mL PBS containing 40 μg/mL propidium iodide (PI, Sigma) and incubated for 30 min in dark at room temperature. For cell apoptosis, cells were washed with 1×PBS (4°C), incubated with 300 μL 1×Binding Buffer containing 5 μL Annexin V-FITC and 5 μL with PI for 30 min in dark at room temperature. Samples were immediately analyzed by a FAC-Scan flow cytometry (Becton–Dickinson). The distribution of cell cycle was analyzed using Flow Jo, CellQuest Pro and the ModiFit software. Three independent experiments were performed.

Cells were grown on coverslips in 6-well plate. The morphology and apoptosis of cells were examined by staining with cell-permeable DNA dye Hoechst 33258 (Sigma). Briefly, cells were fixed with ice-cold 70% ethanol in PBS for 30 min after exposure to TPL (25 nM) and/or X-ray (6 Gy) for 48 h, then stained with 5 μg/mL cell-permeable DNA dye Hoechst 33258 (Sigma) dissolved in Hanks’ buffer for 10 min in the dark. Cells with homogeneously stained nuclei were considered to be viable, whereas the presence of chromatin condensation and/or fragmentation was indicative of apoptosis. To calculate the percentage of apoptotic cells, at least 200 cells in three different microscopic fields were evaluated.

CNE2 and CNE2-SR cells were seeded at a density of 8 × 104 cells/well in a 6-well plate and cultured in the presence of TPL (25 nM) and/or X-ray (6 Gy) for 48 h. Western blot was carried out as previously described [7]. Briefly, 50 μg of cell lysates were separated by 10% SDS-PAGE and transferred onto polyvinylidene difluoride membrane. Blots were blocked with 5% nonfat milk for 2 h at room temperature and then incubated with polyclonal goat anti-GRP78 antibody (1: 2,000 dilution, Santa Cruz Biotechnology, Santa Cruz, CA) at 4°C overnight. The membranes were washed and incubated with horseradish peroxidase-conjugated secondary antibody (1: 2000, Santa Cruz Biotechnology). As a loading control, β-actin was detected simultaneously using monoclonal mouse anti–β-actin antibody (1: 3,000 dilution, Sigma). Visualization was performed with an Amersham-enhanced chemiluminescence system. The intensity of bands was quantified by software. All experiments were repeated three times.

Radioresistance of cells was measured by clonogenic survival assay following exposure to irradiation. The clonogenic survival assay was carried out as described previously [7, 20]. Briefly, cells were plated in six-well culture plates and were exposed to 6 Gy X-ray. After irradiation, the cells were cultured for 15 days and the number of surviving colonies (defined as a colony with > 50 cells) was counted. After staining with crystal violet, cell colonies were counted under a microscope. The survival fraction was calculated based on the formula: number of colonies counted/(number of cells plated × plating efficiency). Three independent experiments were performed.

The radiosensitizer effects of TPL in Xenograft mouse model

To evaluate the pharmacodynamics of TPL, we compared the antitumor efficiency of TPL or/and X-ray in xenograft mouse model of CNE2 and CNE2-SR in vivo. Three week-old nude mice were subcutaneously inoculated with 1 × 107 CNE2/CNE2-SR cells diluted with 1640 medium. The tumors were treated in the presence of TPL (25 nM) and/or X-ray (6 Gy) after tumor formation. The body weight and tumor volume were monitored and calculated every 3 days for 30 days. The tumor volumes were calculated by the equation V (mm3) = a × b2/2, where “a” is the largest diameter and “b” is the perpendicular diameter.