Breast cancer is the most common cancer among women worldwide [1]. Among the clinical classifications of breast cancer [2], human epidermal growth factor receptor-2 (HER-2)-overexpressing breast cancer has a high risk of treatment failure because it spreads rapidly and is highly metastatic as well as drug resistant [3]. Clinically, Herceptin is the most common treatment [4]; however, some patients exhibit drug resistance within 1 year of treatment [5]. Therefore, overcoming drug resistance and establishing more effective treatment options for patients with HER-2 overexpression is crucial [6].

Epithelial–mesenchymal transition (EMT) is a key event in cancer metastasis [7]. Tumor hypoxia results in the high expression of hypoxia-inducible factors (HIFs), thereby inducing EMT [8]. After EMT induction, the transcription factors Snail or Twist suppresses the intercellular binding protein E-cadherin, reducing binding between cancer cells and generating highly aggressive and mobile cancer cells; this promotes the departure of cancer cells from the primary tumor, leading to tumor metastasis [9]. EMT can induce the generation of cancer cells with stem cell characteristics [10], and cancer stem cells are one of the most crucial factors in cancer recurrence, metastasis, and drug resistance [11].

Y-box binding protein 1 (YB-1) is a multifunctional protein involved in transcription and translation; high YB-1 expression promotes cell proliferation and inhibits apoptosis, tumor invasion and metastasis, and angiogenesis [12]. Studies have found that YB-1 can promote breast cancer, bladder cancer, liver cancer, and progression and metastasis of other cancers [13] through EMT regulation. YB-1 expression, which has been detected in many cancers, promotes stem cell expression, improves mobility of cancer cells, and enhances expression of genes associated with drug resistance and other common characteristics of cancer stem cells [14–16]. 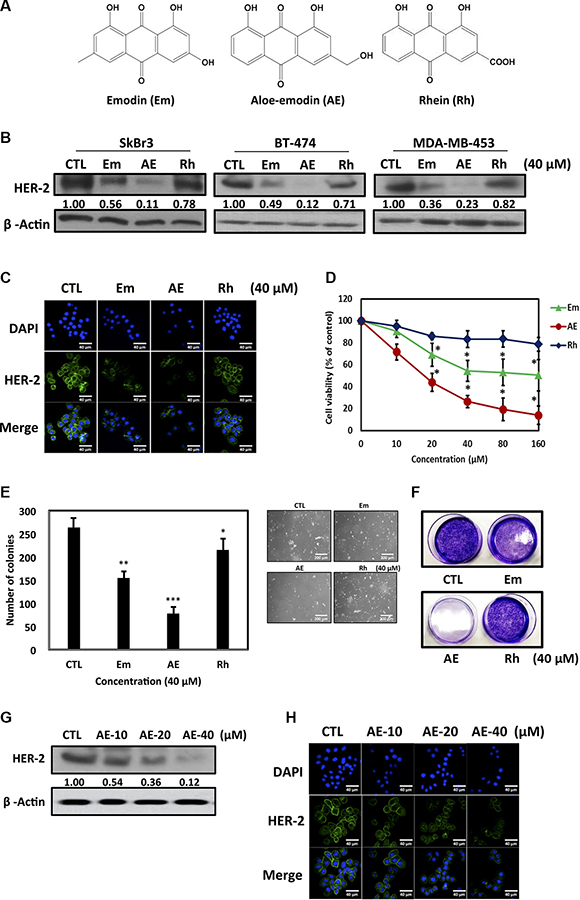 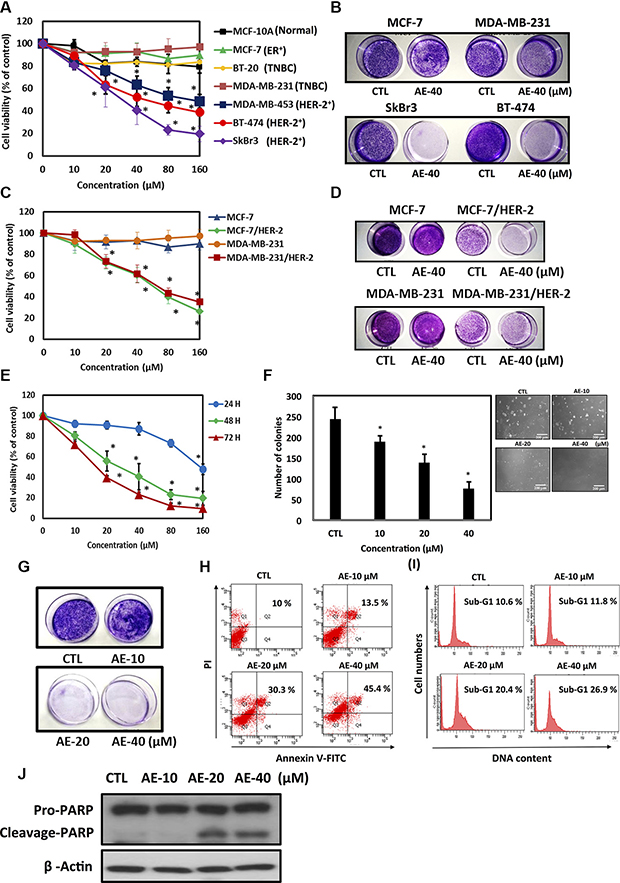 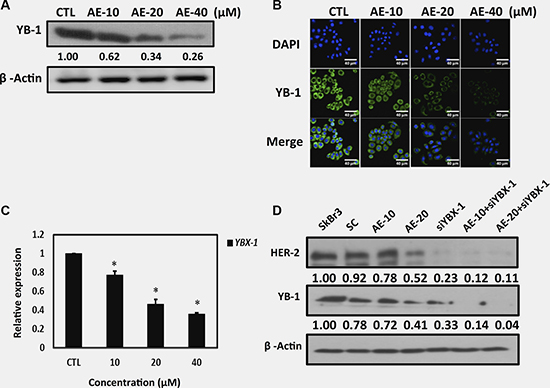 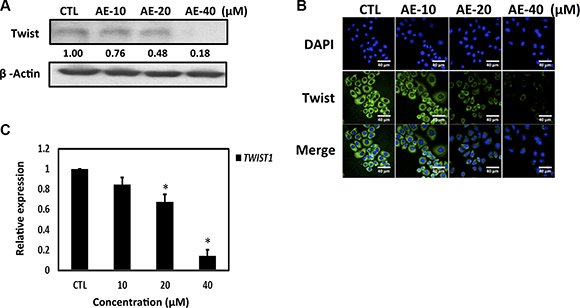 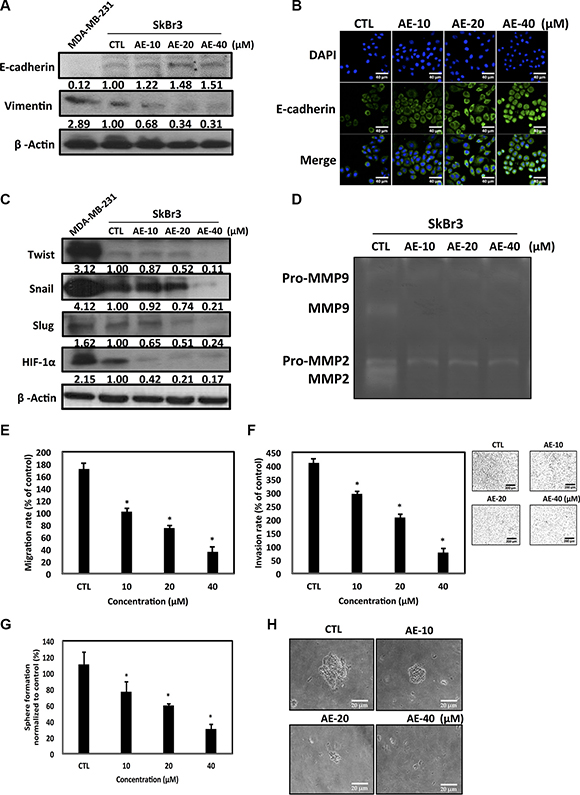 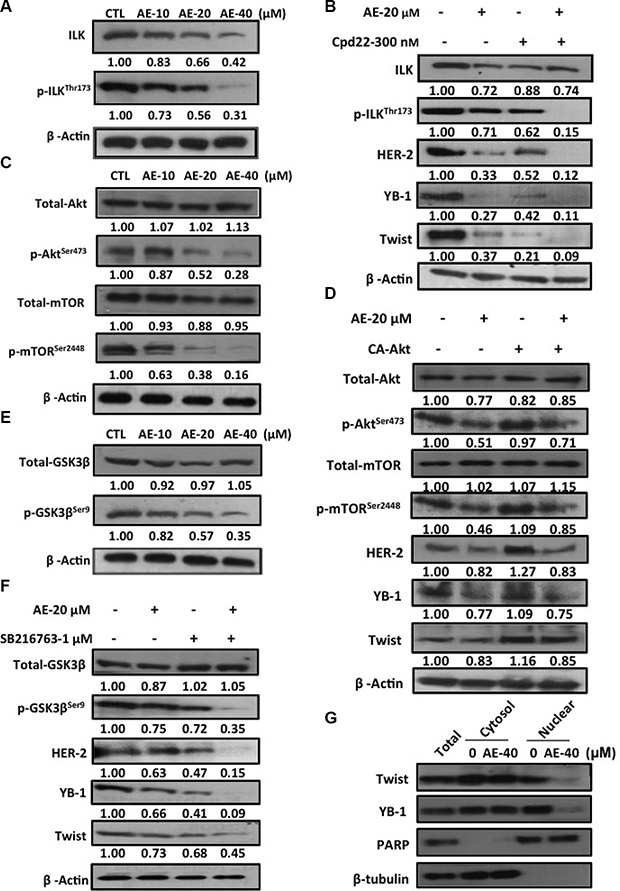 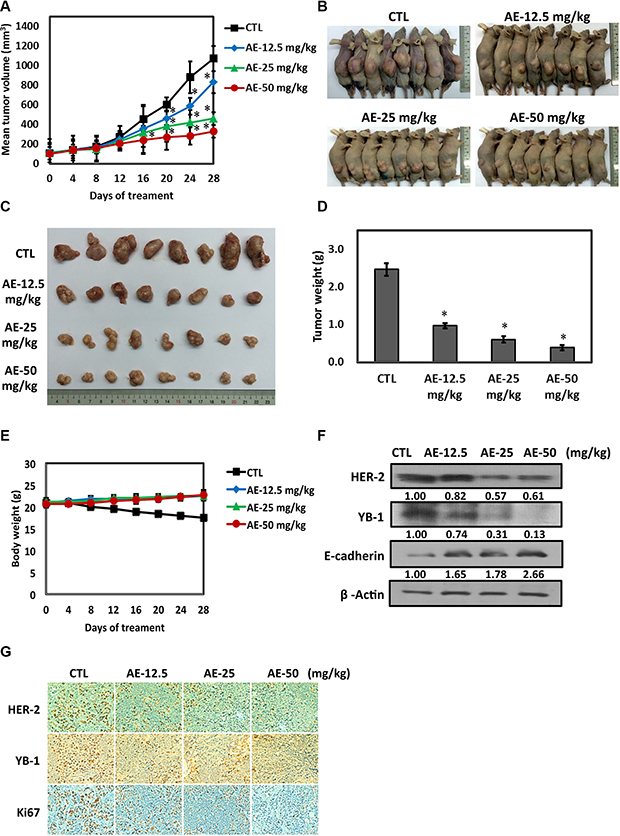 Figure 7: Effects of aloe-emodin on anti-tumor activity. (A) SkBr3 cells were used to establish xenografts in male BALB/c nude mice. Animals (six mice/group) were given control and AE (12.5, 25, and 50 mg/kg) by i.p. injection 5 times for 14–18 days. Tumor size was monitored through serial caliper measurements twice a week. Each point represents mean tumor size ± SE. (B) One representative mouse and its tumors are shown. (C) Representative tumors in each group are demonstrated. (D) Tumor weight was calculated as indicated in Materials and methods section. (E) Weekly body weight measurements indicated that therapy was not toxic. Each point represents mean ± SE. (F) Tumor tissues were immunoblotted with anti-HER-2, anti-YB-1, and anti-E-cadherin antibodies. (G) Tumor tissue was collected at the conclusion of therapy, fixed in 10% normal buffered formalin, and embedded in paraffin. Four-micron (4 μM) sections of tumor tissue were assessed using immunohistochemistry for androgen receptor expression. Immunohistochemical analyses in xenograft tumors on day 28 after AE treatment were performed using antibodies against HER-2, YB-1, and Ki67. Magnification, ×40; scale bar, 500 μM.

HER-2 is found on the surface of all normal cells and receives signals for the regulation of cell growth [31]. However, in cancer cells, owing to gene amplification, many HER-2 receptor proteins are present on the surface of cells, leading to excessive growth of cells [32]. Cancer cells show rapid growth, division, and even more rapid metastasis. Compared with patients with early HER-2-overexpressing breast cancer, the probability of recurrence after resection is higher in patients with HER-2 overexpression, which accounts for approximately 25–30% of all breast cancer patients [33]. Due to the recurrence rate of HER-2-overexpressing breast cancer, early HER-2 breast cancer treatment after surgery depends on the patient’s condition; they can undergo hormone therapy, chemotherapy, or radiotherapy as adjuvant treatment [34]. The target agent therapy clearly influences relapse prevention of HER-2-overexpressing breast cancer; therefore, the use of a target therapy as an adjuvant therapy is very crucial [35].

Recent studies have shown that various characteristics of cancer stem cells, such as their high mobility, immune specificity, and metabolic specificity, differ considerably from our understanding of cancer cells; therefore, the development of cancer stem cell treatment is the future of cancer treatment [39–41]. The multifunctional protein YB-1 has been found in many cancers, with the common characteristics of promotion of stem cell marker expression, improvement of mobility, and enhancement of cancer drug resistance gene expression [42–45]. Therefore, the inhibition of YB-1 expression has attracted much attention. In this study, we confirmed that AE treatment significantly reduced YB-1 expression in HER-2-overexpressing cell lines (Figure 3). 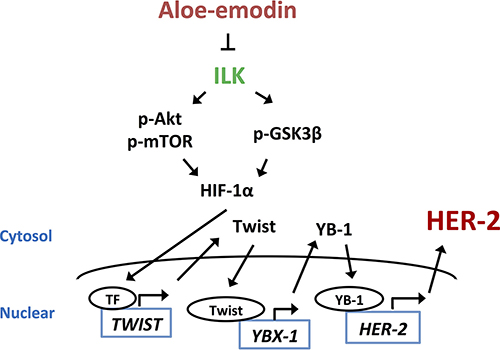 Figure 8: The signaling pathways of Aloe-emodin inhibits HER-2 expression.

Cells were plated at 2 × 104 cells per well in triplicate in 24-well plates and incubated in a medium containing 10% FBS. After 24 h of incubation, the complete medium was replaced with the test medium containing vehicle control or various doses of emodin, AE, and rhein for 24, 48, and 72 h at 37°C. MTT solution (stock concentration: 5 mg/mL in PBS) was diluted to 500 μg/mL. MTT working solution (100 μL) was added to each well and incubated at 37°C for 2 h. The absorbance was measured at 590 nm by using a 96-well plated reader.

Expression of HER-2, YB-1, Twist, and E-cadherin in the cells was analyzed through Leica confocal microscopy conducted using a monoclonal primary antibody [58].

SkBr3 cells were treated with 40 μM emodin, AE, and rhein or various doses of AE. Cells were suspended in a medium containing 0.4% agar and overlaid on 1% agar in 24-well plates (500 cells per well), respectively. After 2–3 weeks, colonies were counted and photographed.

Cell monolayers were wounded using a sterile pipette tip and rinsed with PBS to remove cellular debris. Cells were treated with various doses of AE for 24 h. The phase contrast images of the wounds were obtained at 37°C for incubation for 0 and 24 h, and three separate experiments were performed.

SkBr3 cell invasion assays were performed in 6.5-mm Transwell chambers (8.0-μm pore size) (Coring Incorporation, NY, USA), and the polycarbonate filters were coated with diluted matrigel (BD Biosciences). SkBr3 cells without and with AE were added to the coated filters (6 × 104 cells per filter) in 200 μL serum-free DMEM-F12 in triplicate wells. DMEM-F12 medium containing 10% FBS was added to the lower chambers. After 24-h incubation at 37°C in a 5% CO2 and 95% humidity incubator, the cells that did not migrate and remained on the upper surface of the filter; they were wiped off using a cotton swab. Migrated cells were fixed in 95% alcohol for 10 minutes and stained with Giemsa for 10 minutes.

Gelatin zymography was performed on protein extracts from the SkBr3 cells. In brief, the cells were rinsed three times with DPBS and cultured in 3 mL serum-free DMEM-F12 for 24 h. The cells without and with AE were separated on 12.5% SDS-PAGE containing 1 mg/mL gelatin. Following electrophoresis at 48 °C, the gel was soaked in 2.5% Triton X-100 to remove SDS, rinsed three times in H2O, transferred to a bath containing 0.1 M glycine-NaOH (pH 8.3), and incubated at 37°C for 16 h. Subsequently, the gel was fixed, stained with 0.5% Coomassie blue in 30% isopropanol and 10% acetic acid for 1 h, and destained in 12.5% isopropanol and 10% acetic acid.

Female BALB/c nude mice (18–20 g; 6–8 weeks of age) were purchased from the National Animal Center (Taipei, Taiwan) and maintained in pressurized ventilated cage in accordance with institutional regulations. SkBr3 cells (3 × 106) were inoculated subcutaneous into the right flank of the mice. Seven days after inoculation, when tumor volumes were larger than 100 mm3, the mice were divided into four groups (six mice per group) and treated daily with vehicle alone and various doses of AE (12.5, 25, and 50 mg/kg). The mice were weighed, and their tumors were measured using calipers twice per week by using a digital caliper. The tumor volume was calculated using the following formula: (width × length2)/2. On the final day of treatment, the mice were sacrificed; the tumors were excised, weighed, and sectioned; the tumor sections were embedded in an optimal cutting temperature (OCT) compound and frozen at −70°C.

Sections frozen in OCT were fixed in acetone and chloroform. After overnight incubation with primary antibodies, including mouse monoclonal anti-HER-2, anti-YB-1, and anti-E-cadherin, the slides were washed again with Tris-buffered saline and Tween20 and incubated with biotinylated secondary antibodies and subsequently with the avidin–biotin–horseradish peroxidase complex (Vector Laboratories, San Mateo, CA, USA). Antibody detection was performed using 3,3′-diaminobenzidine, and the tissue sections were counterstained with Mayer’s hematoxylin, washed, mounted with Universal Mount, and dried on a 56°C hot plate. The prepared slides were examined through light microscopy.

This study is supported in part by Taiwan Ministry of Health and Welfare Clinical Trial and Research Center of Excellence (MOHW105-TDU-B-212-133019).