Germline mutations of the APC gene are associated with an autosomal dominant precancerous condition, termed familial adenomatous polyposis (FAP). FAP is clinically manifested by the presence of multiple colorectal adenomas or polyps. Gradually, these colorectal adenomas or polyps inevitably result in colorectal cancer by the third-to fourth decade of life. Surgical interventions or total proctocolectomy is the best possible treatment for FAP. Here, we present a clinical molecular study of a five generation Chinese family with FAP. Diagnosis of FAP was made on the basis of clinical manifestations, family history and medical (colonoscopy and histopathology) records. Blood samples were collected and genomic DNA was extracted. Genetic screening of the APC gene was performed by targeted next-generation sequencing and quantitative real-time PCR. Targeted next generation sequencing identified a novel heterozygous large deletion [exon5-exon16; c.423_8532del] of APC gene, which segregated with the FAP phenotypes in the proband and in all the affected family members. Unaffected family members and normal controls did not carry this deletion. In the Chinese population, most of the previously reported APC gene mutations are missense mutations. This is the first report describing the largest deletion of the APC gene in the Chinese population associated with FAP.

Germline mutations of the APC gene are associated with FAP. APC is a tumor suppressor gene [7, 8], associated with cell adhesion, transcriptional activation, cell migration, and apoptosis [9, 10]. The APC protein is a multi-functional molecule comprises of eight known functional subdomains involved in the regulation of cell adhesion, polarization, and migration. The main function of the APC protein is to regulate the β-catenin protein level. Mutations of APC result in the accumulation of the β-catenin protein in cytoplasm through the activation of other transcription factors including Tcf, which in turn causes aberrant activation of the canonical Wnt signaling pathway leading to uncontrolled cell proliferation, progression and development of colon cancer [11]. According to the previous published reports, the majority of pathogenic APC germline mutations belong to three categories, nonsense/frameshift mutations, splice sites mutations and deep intronic deletions. Nonsense/frameshift mutations splice sites mutations and deep intronic deletions of the APC gene lead to large genomic rearrangements, resulting in the formation of truncated APC proteins [12]. Although, it has been found that in few cases, point mutations or missense variants within the coding sequence also result in the formation of alternative transcripts due to aberrant splicing [13, 14]. It has been reported that 2% of all germline APC gene mutations are large genomic deletions [15]. Moreover, in HGMD, 1000 different APC germline mutations have been reported till date (http://www.hgmd.cf.ac.uk/ac). In addition, over 194 unique APC germline mutations from 191 patients have been reported in the Chinese population with 76 small deletions (75 small deletions are in coding region and 1 deletion in intron) (http://www.genomed.org/lovd2/home.php?select_db=APC). In the Chinese population, there was no large deletion of APC gene has previously been reported. However, the 5’end of the APC gene appears to be the most common site for germline mutations. The codon 1309 of the APC gene is a mutation cluster region (MCR) with a higher frequency of APC germline mutations. The location of the mutation in the APC gene is very significant as it is directly correlated with the phenotypic spectrum of the disease, age of onset and the appearance of extracolonic manifestations in FAP patients [16].

Here, in order to identify the molecular basis of FAP in the proband and in all the affected members of this five generation Chinese family, we screened a panel of 14 genes (APC, MLH1, MSH2, MSH6, PMS2, AXIN2, BMPR1A, EPCAM, MLH3, MUTYH, PMS1, PTEN, SMAD4, STK11) associated with colorectal cancer by targeted next-generation sequencing and Quantitative Real-Time PCR (qPCR). We identified a novel heterozygous large germline deletion of APC gene segregating with FAP phenotype among all the FAP patients in this five generation Chinese family, with autosomal dominant inheritance.

We identified a five generation Chinese pedigree with 23 members, among whom five individuals were affected by FAP including two with CRC (Figure 1). Another 2 affected family members (II-1 and II-3) had died from CRC. In Table 1, we have described the detailed and comprehensive clinical information for all the affected and unaffected members in this family. A comprehensive and comparative colonoscopy and histopathology of colon and rectum for all the affected family members along with an unaffected member (III-2) are shown in Figure 2. 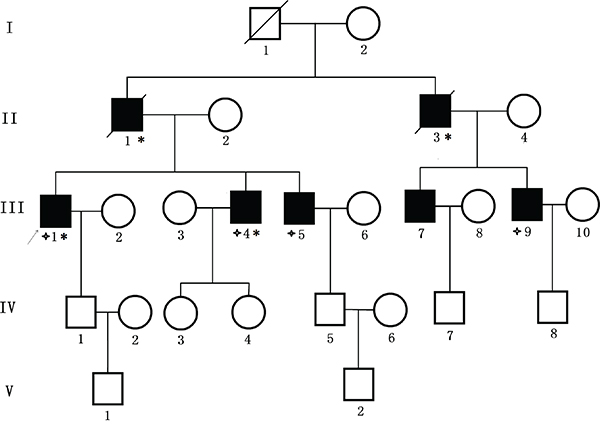 Table 1: Clinical characteristics of all the affected and unaffected family members found in our study 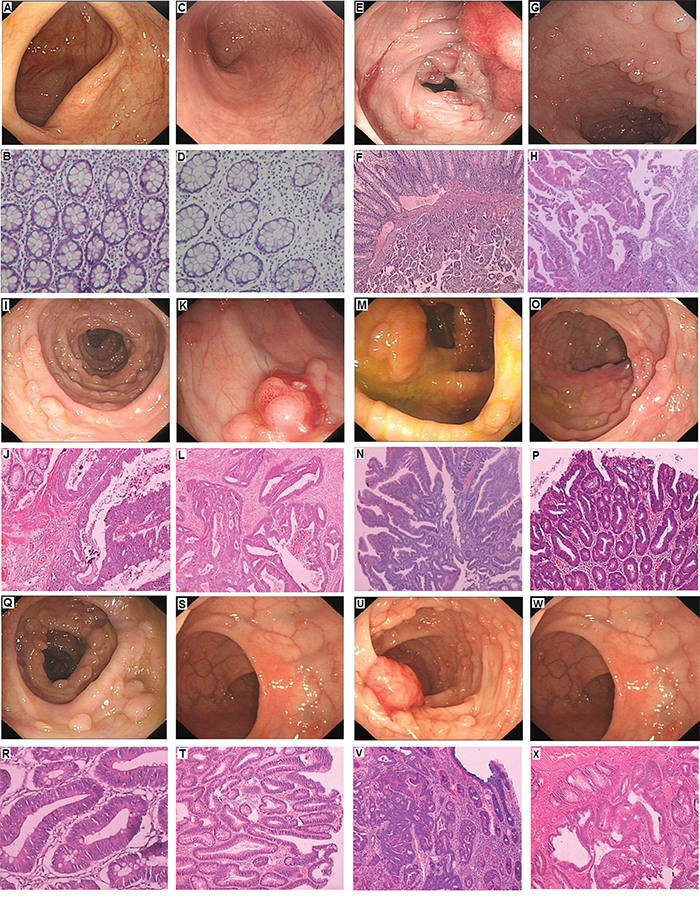 A heterozygous novel large deletion; [exon5-exon16; c.423_8532del]in APC gene [NCBI Reference sequence NM_000038.3] was identified in proband (III-1) by targeted next generation sequencing. This heterozygous novel large deletion co-segregated with the FAP phenotypes in the proband (III-1) and amongst all the affected family (III-4, III-5 and III-9) members, (sample of III-7 was unavailable) but absent in the unaffected family members. We did not detect this mutation in the normal control of the same ethnic origin, gender and age range. 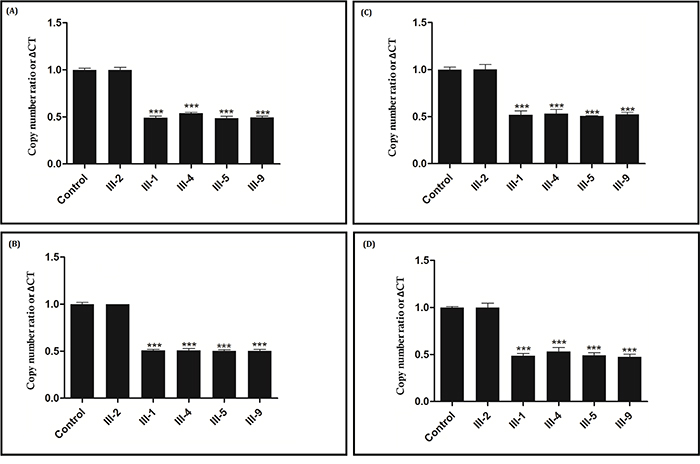 Figure 3: Verification of the novel heterozygous large deletion in III-1, III-4, III-5 and III-9 by quantitative real-time PCR (qPCR). Copy number ratio of the exon 5 Figure 3A., exon 9 Figure 3B., exon 12 Figure 3C. and exon 16 Figure 3D. in THE control and in A normal family member (III-2) is nearly 1, and the Copy number ratio in proband (III-1) and other affected family members (III-4, III-5 and III-9) is approximately half. Actin DNA was used as a loading control.

In this Chinese family, diagnosis of FAP has been done according to a review of clinical report, endoscopic and histo-pathological data. However, the presence of specific clinical symptoms (colorectal adenomas/polyposis) and the autosomal dominant mode of inheritance allow the diagnosis of the disease in this family as FAP. In our study, the heterozygous novel large deletion of APC gene in this Chinese family manifests with colorectal adenomas (polyps) without any extra-colonic manifestations.

A large number of pathogenic APC gene mutations have been reported in different countries and ethnic groups [16]. According to the HGMD dataset, small deletions account for the majority of APC gene mutations, resulting in alteration of the open reading frame followed by the formation of a truncated gene product. Until now, 275 sequence variants of the APC gene have been reported in the Chinese population. Among these, 194 are unique variants were identified out of 191 individuals. Among the 275 sequence variants of the APC gene, the majority is substitutions (164), but frameshift (101), nonsense (83), deletion (76), insertion (33) and inversion (2) are also reported (http://www.genomed.org/lovd2/variants_statistics.php).

Previous reports had not described large deletions of the APC gene in the Chinese population (http://www.genomed.org/lovd2/variants.php?select_db=APC&action= view_all&view=DNA_del).

According to a very recent report, a novel deletion in exon 14–15(c.1936-2148del) and intron 14 was described as causing FAP without any extracolonic manifestation in a Chinese family [1].

Genotype–phenotype correlation studies are very significant and enable us to define the most likely phenotype to be associated with a given mutation. The identification and characterization of APC mutation carriers with a well diagnosed phenotype will allow us to establish specific surveillance programs and prophylactic surgical treatment. APC germline mutations, affecting the mutation cluster region (MCR), are correlated with more severe phenotype and early age of onset in FAP patients [23–27].

In conclusion, the present study describes a heterozygous novel large deletion mutation in APC gene in a five generation Chinese family with FAP. Our study expands the spectrum of the germline mutations of APC gene in the Chinese population. This novel finding contributes to a more comprehensive database of germline mutations of APC gene that could be used for the molecular diagnosis, risk assessment, susceptibility of the disease for the FAP patients.

Family members of this five generation Chinese family have given written informed consent as they are participating in this study. The Ethical Committee of the Tianjin Union Medical Center, China, reviewed and approved our study protocol in compliance with the Helsinki declaration. Diagnosis of the patients for FAP has done by oncologists, on the basis of clinical test reports and detailed family pedigree.

A five generation Chinese family with FAP (Figure 1), diagnosed and treated in the Department of Colorectal Surgery, Tianjin Union Medical Center, 300121, China, were enrolled in our study. Clinical diagnosis of FAP was established in this family by endoscopic screening after the proband (III-1) presented to Tianjin Union Medical Center with CRC. The diagnostic standard or criteria for patients with FAP was as follows: (1) patients having >100 colorectal adenomas or polyps and (2) at least 20 synchronous colorectal adenomas or polyps in patients with a positive family history of FAP.

DNA samples obtained from the proband (III-1) were sequenced using target exome-based next-generation sequencing. Roche NimbleGen’s (Madison, USA) custom Sequence Capture Human Array was used to designed to capture 98480 kb of targeted sequence, covering 181 exons and flanking sequence (including the 100 bp of introns) of 14 genes (APC, MLH1, MSH2, MSH6, PMS2, AXIN2, BMPR1A, EPCAM, MLH3, MUTYH, PMS1, PTEN, SMAD4, STK11) which is associated colorectal cancer (CRC) and yielded an average of 6366534 reads per sample, with approximately 68.78% mapping to the targeted regions. The average sequencing depth of the target area is 464.68% with 99.46% coverage. The procedure for preparation of libraries was consistent with standard operating protocols published previously. In each pooling batch, 10 to 33 samples were sequenced simultaneously on Illumina HiSeq 2500 Analyzers (Illumina, San Diego, USA) for 90 cycles (specially designed by us for this study). Image analysis, error estimation, and base calling were performed using Illumina Pipeline software (version 1.3.4) to generate raw data. The raw reads were screened to generate – clean reads‖ followed by established filtering criteria. Clean reads with a length of 90 bp were aligned to the reference human genome from the NCBI database (Build 37) using the Burrows Wheeler Aligner (BWA) Multi-Vision software package with output files in - bam‖ format. The bamdata were used for reads coverage in the target region and sequencing depth computation, SNP and INDEL calling, and CNV detection. First, a novel three-step computational frame work for CNV was applied. Then, SNPs and INDELs were called using SOAPsnp software and Sam tools pileup software, respectively. A SNP or INDEL was be filtered if it could not follow the criterion: supported by at least 10 reads and >20% of the total reads. The frequency filter was set at 0.05. If a SNP frequency was more than 0.05 in any of the four databases (dbSNP, Hapmap, 1000 Genomes Project, the 124 healthy reference samples sequenced in this study), it would be regarded as a polymorphism, but not a causative mutation.

In order to validate the result of targeted next generation sequencing and further quantify the DNA copy number change for the APC gene q-PCR was undertaken. The relative DNA copy number for the APC 5, 9, 12, 16 exons were measured by quantitative real-time PCR (qPCR) using an ABI 7900HT Real-time PCR system (Life Technologies, Carlsbad, CA, USA) and HS qPCR Master Mix, according to the manufacturer’s instructions. The primers used for amplifying APC exons were listed in Table 2.

The PCR conditions were an initial denaturation step of 95°C for 10 min, followed by 95°C for 10 s, annealing (annealing temperature specific for a pair of primers) for 15 s and 72°C for 30 s, for a total of 45 cycles. The relative expression levels of APC were normalized to those of actin. The DNA copy number level for the APC exons (exon 5, 9, 12 and 16) in each sample were compared with the level in control blood samples from normal individual. Data were analyzed using the comparative threshold cycle (2–ΔΔCT) method.