2The Department of Orthopedics, The Second Affiliated Hospital of Soochow University, Suzhou 215000, China

3The Center of Diagnosis and Treatment for Children’s Bone Diseases, The Children’s Hospital Affiliated to Soochow University, Suzhou, Jiangsu, 215000, China

The metastatic or advanced osteosarcoma (OS) is among the most intrinsically resistant malignancies to almost all conventional chemotherapeutic drugs [1, 2]. Therefore, our group [3, 4] and others have been focusing on exploring novel and more efficient anti-OS agents [1]. Molecularly-targeted agents are being tested [1, 2]. Overactivation of mammalian target of rapamycin (mTOR) is observed in many human OS tissues [3, 5–7], which is often associated with cancer progression and poor prognosis [3, 7]. Our group [3] and others have demonstrated that mTOR is vital for several key OS cell functions, such as cell growth, proliferation, and survival, as well as apoptosis-resistance and metastasis.

Preclinical studies have implied a therapeutic value of the mTOR inhibitors for OS [3, 8, 9]. It is known that mTOR forms at least two multi-protein complexes, including the traditional mTOR complex 1 (mTORC1) and later discovered mTORC2 [10–12]. mTOR1, or the rapamycin-sensitive mTOR complex, is assembled with mTOR, Raptor, PRAS40 and possible others [10–12]. On the other hand, mTORC2 is composed of mTOR, Rictor, Sin1 and Protor [10–12]. Both complexes are important for cancer progression, and regulating different and sometime over-lapping cancerous behaviors [10–12].

The clinical use of traditional mTORC1 inhibitors, including rapamycin and its analogs (“rapalogs”), has been limited due to several drawbacks, including the incomplete inhibition of mTORC1, and ineffectiveness to mTORC2 [13]. These led to the development of mTORC1/2 dual inhibitors, also known as the second generation of mTOR inhibitors [13]. Recent studies have characterized XL388 as a selective, highly-potent, and orally available small-molecule ATP-competitive inhibitor of mTORC1/2 [14]. It blocked mTORC1 and mTORC2 activation simultaneously [14]. The IC-50 of XL388 for mTOR is around 10–100 nM [14]. This mTORC1/2 dual inhibitor has displayed anti-tumor activity in preclinical cancer models [14]. In the current study, we explored its activity in preclinical OS models.

XL388 is cytotoxic to OS cells 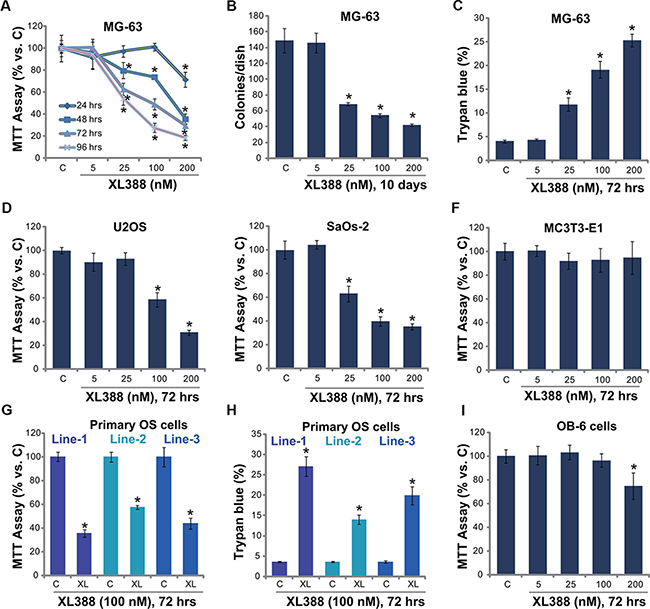 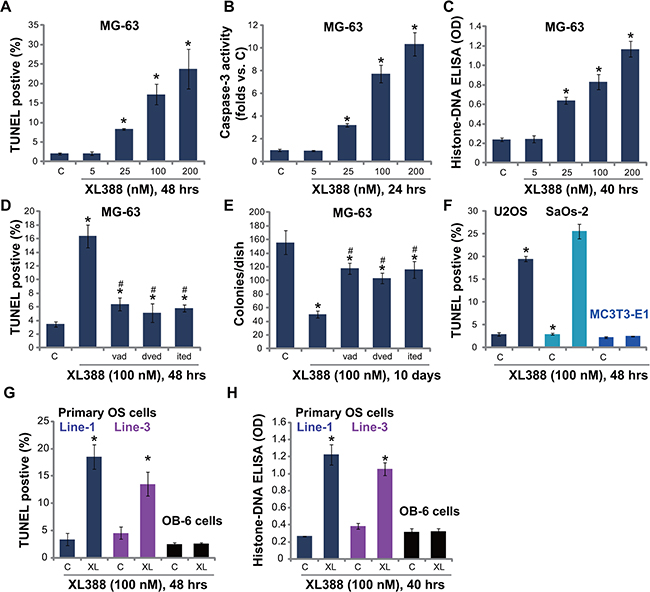 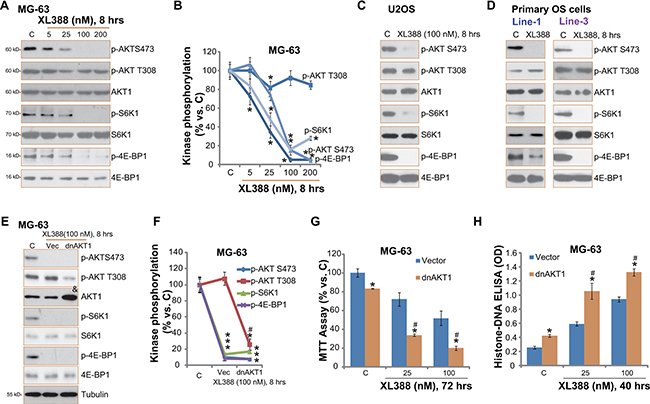 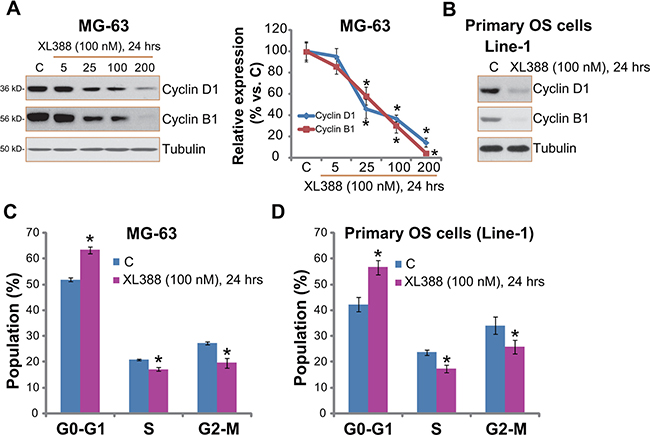 Figure 4: XL388 inhibits OS cell cycle progression. Listed OS cells were treated with applied concentration of XL388 for 24 hours, cyclin B1/D1 expression was tested by Western blots (A and B); Quantitative cell cycle distribution was examined by FACS assay (C and D). n = 3 for each assay. *p < 0.05 vs. group “C”. 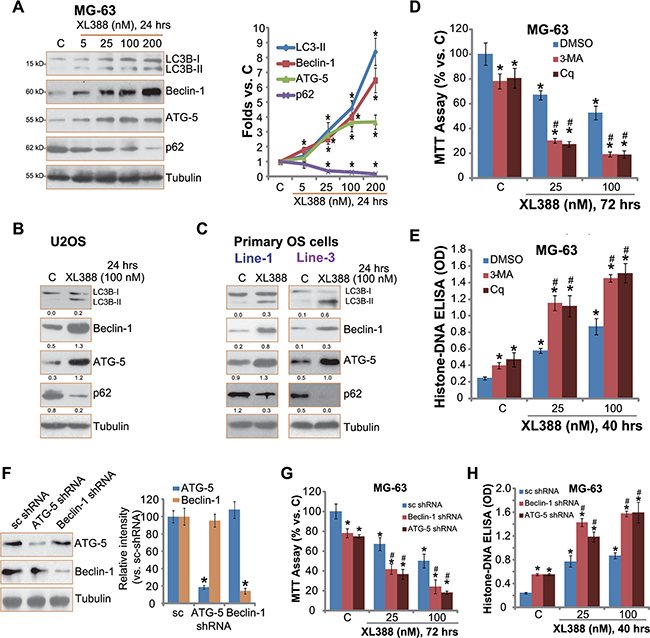 At last, we tested the in vivo anti-OS activity by XL388 using the U2OS xenograft SCID mice model [3]. U2OS tumor growth curve results in Figure 6A demonstrated that oral administration of XL388 (20 mg/kg body weight, every three days, × 7 times) significantly inhibited U2OS xenograft growth in SCID mice. Importantly, its activity was further enhanced when combined with the autophagy inhibitor 3-MA (Figure 6A). The combined efficiency was more potent than either single treatment (Figure 6A). 3-MA as a single agent also slightly inhibited U2OS xenograft growth at applied concentration (20 mg/kg, i.p., every three days, × 7 times, Figure 6A) [19]. Note that the mice body weight was apparently not affected by the single or the combined treatment (Figure 6B). 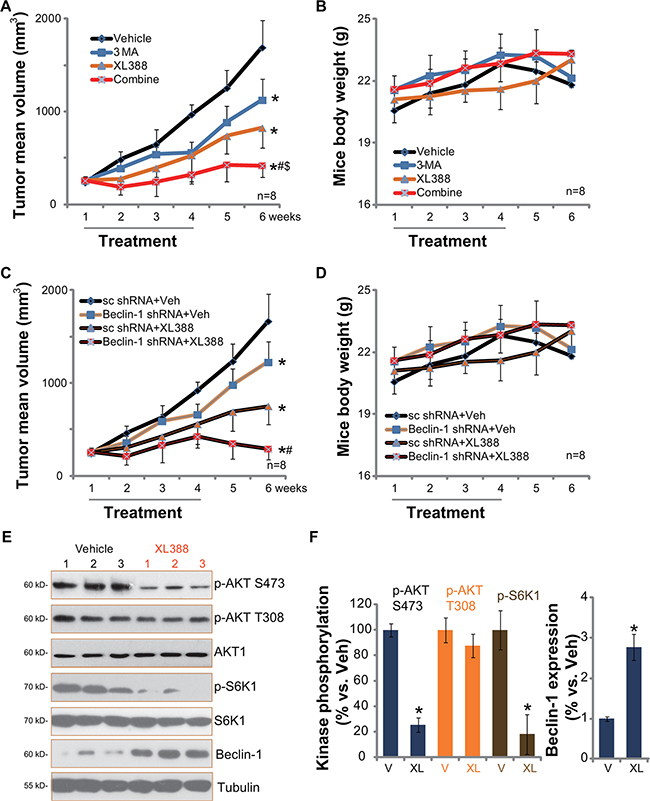 Studies have shown that mTOR overactivation is an important contributor of OS progression [7]. There are several limitations when using the traditional mTORC1 inhibitors (rapalogs). First, mTORC1 inhibition by rapamycin or its analogs could lead to feedback activation of PI3K-AKT and several other pro-survival/anti-apoptosis pathways [28, 29]. Second, instead of acting directly on mTOR, rapalogs bind to the cytosolic protein FK-binding protein 12 (FKBP12), leading to partial inhibition of mTORC1 [28, 29]. Third, the mTORC1 inhibitors are often with poor water solubility, and clinical usage is limited [28, 29]. Here we showed that XL388 was significantly more potent than known mTORC1 inhibitors (rapamycin and RAD001) in inhibiting OS cells. Intriguingly, XL388 only exerted minor cytotoxicity to OB-6 osteoblastic cells and primary murine osteoblasts. One possibility is that these osteoblasts showed low basal mTORC1/2 activation (Supplementary Figure 3). Another possibility is that other signalings besides AKT-mTOR are more important to the survival of osteoblasts, which are obviously not affected by XL388.

Recent studies have shown that mTOR inhibition could lead to feedback activation of cytoprotective autophagy, which counteracts the anti-cancer activity by a number of mTOR inhibitors [18]. Here, we showed that XL388 blocked both mTORC1 (p-S6K1/4E-BP1) and mTORC2 (p-AKT-Ser 473) activation in OS cells, which might explain the subsequent autophagy activation. Note that autophagy activation was detected by LC3B-I to LC3B-II conversion, Beclin-1/ATG-5 upregulation, and p62 degradation [24]. XL388-induced autophagy induction was observed not only in established OS cell lines, but also in primary human OS cells.

All methods listed in the study were carried out in accordance with the approved guidelines by authors’ institutions (Medical College of Southeast University and the Second Affiliated Hospital of Soochow University).

U2OS, SaOs-2 and MG-63 OS cell lines as well as the murine calvaria-derived osteoblastic MC3T3-E1 cells were maintained and cultured as reported [3, 4]. The OB-6 human osteoblastic cells were purchased from the Cell Bank of Shanghai Institute of Biological Science (Shanghai, China), and were cultured as described [15]. For primary culture of murine osteoblasts, the trimmed calvariae of neonatal mice were digested with 0.1% collagenase I (Sigma) and 0.25% dispase (Sigma). The resolving cell suspensions were neutralized with complete culture medium and were filtered. The calvarial osteoblasts were then resuspended in 10 mL α-MEM containing 15% FBS, and were cultured.

Surgery-separated human OS tissues were washed, and digested in collagenase I (Sigma)-containing DMEM medium. After 3–5 digestions, the resolving cell suspensions were cultured in complete DMEM medium, containing 10% FBS, 2 mM glutamine, 15 mM HEPES buffer, 0.5 μg/mL hydrocortisone and 2.5 μg/mL insulin, 1.0 μg/mL EGF (Sigma). Passage 3–8 were utilized for further experiments. The protocols were approved by the Internal Review Board (IRB) of all authors’ institutions, and were conducted according to the principles expressed in the Declaration of Helsinki. The written-informed consent was obtained from each participant. The tissue specimens were collected from three OS patients. Enneking grading of the OS patients were listed: Patient number 1 (Male, 16 years old): G1/T1/M0; Patient number 2 (Male, 20 years old): G1/T0/M0; Patient number 3 (Male, 19 years old): G2/T0/M0. These patients received no chemotherapy or radiation prior to surgery.

As reported [3, 4], cell survival was tested by the MTT assay.

After applied treatment, dead cells were stained by trypan blue dye (Sigma), and the percentage (%) of trypan blue positive cells was recorded.

Cells (5 × 104/well) were suspended in 1 mL of DMEM with 1% agar (Sigma), 10 % FBS and with indicated XL388 treatment. The cell suspension was then added on top of a pre-solidified 1% agar in a 100 mm culture dish. The drug containing medium was refreshed every 2 days. After 10-day incubation, the number of remaining colonies were stained and manually counted.

Cells were lysed by the lysis buffer described [3, 4]. Samples (20–30 μg) were separated by 8–15% SDS-PAGE gel, and transferred onto polyvinylidene fluoride (PVDF) membranes (Millipore, USA). Afterwards, the membranes were blocked, and incubated overnight at 4°C with the indicated primary antibodies. Secondary antibodies were conjugated to horseradish peroxidase (Santa Cruz). Detection was accomplished by chemiluminescence with ECL (GE Healthcare). Quantification of bands was performed as described [3, 4].

Cytosolic proteins from approximately 2 × 106 cells were extracted [3, 4]. Twenty μg of cytosolic extracts were added to the caspase assay buffer [3, 4] with Ac-DEVD-AFC (15 μg/mL) (Calbiochem) as the substrate. After incubation, the amount of released AFC was measured using a spectrofluorometer (Thermo-Labsystems, Helsinki, Finland).

Histone/DNA ELISA for detection of apoptosis

The Cell Apoptosis Detection ELISA Kit (Roche) was utilized to quantify cell apoptosis according to the protocol provided by the manufacturer. Detailed procedure can be found in our studies [3, 4].

The lentiviral particles with Beclin-1 shRNA (sc-29797-V) or the scramble control shRNA (“sc shRNA”, sc-108065) were purchased from Santa Cruz Biotech (Santa Cruz, CA). The human ATG-5 shRNA containing lentivirus were designed and provided by Genechem (Shanghai, China), the ATG-5 shRNA sequences were previously reported [16]. The lentiviral shRNA were added to the cultured OS cells for 36 hours, and stable clones expressing sc-, Beclin-1- or ATG-5-shRNA were selected by puromycin (5.0 μg/mL, Sigma). Cells were cultured in puromycin-containing medium for a total of 10–14 days, and the resistant stable colonies were formed. The expression of targeted protein (Beclin-1/ATG-5) in stable cells was always checked by Western blot.

pcDNA3-AKT1 T308A was provided by Genechem (Shanghai, China) through the in vitro site-directed mutagenesis system. pcDNA3-AKT1 T308A-puro or the empty vector (pcDNA3-puro) was transiently transfected into MG-63 cells. Transfection was carried out in DMEM with 2% FBS (without antibiotics) utilizing Lipofectamine Reagent (Invitrogen). Stable cells were again selected by puromycin (5.0 μg/mL) as described above. AKT1 expression and Thr-308 phosphorylation in stable cells were verified by Western blots.

As described previously [3], CB.17 severe combined immuno-deficient (SCID) male mice (5–6 weeks old) were maintained at the animal facility of Southeast University of China (Nanjing, China). Mice were injected subcutaneously (s.c.) into the right flanks with 3 × 106 U2OS cells. When xenografts were established at about 250 mm3 in volume, the SCID mice (11 mice per group) were administrated with XL388 (20 mg/kg in saline, oral gavage) [17], or plus 3-MA (20 mg/kg in saline, intraperitoneal injection) [18, 19], which were both freshly prepared and given once every 3 days for a total of 21 days. Control mice received vehicle (saline) only. The xenografted tumor diameter was measured every 7 days. Tumor volumes (mm3) and mice body weights (g) were recorded as described [3, 4]. The animal protocols in the study were in accordance with the Institutional Animal Care and Use Committee (IACUC), and were approved by authors’ institutions.

The data presented were mean ± standard deviation (SD). Statistical differences were analyzed by one-way ANOVA followed by multiple comparisons performed with post hoc Bonferroni test (SPSS version 16). The duration of treatment and concentration of agents were chosen based on pre-experiment results. Values of p < 0.05 were considered statistically significant.

Recent genetic screen studies have implied that AKT-mTOR signaling is vital for OS development and metastasis [14, 34]. Importantly, a recent Phase II clinical trial study has shown that administration of mTOR inhibitor ridaforolimus improved the progression-free survival (PFS) of patients with advanced OS [35]. The present study showed that XL388 potently inhibited AKT (Ser-473) and mTOR activation, and suppressed OS cell proliferation in vitro and in vivo. Therefore, XL388 could be further tested as a potential treatment for OS.

All listed authors state no conflicts of interest.