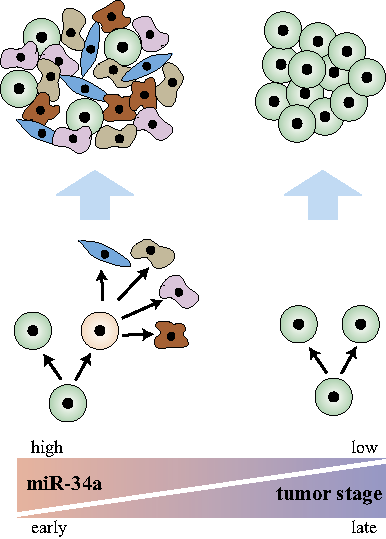 Bu et al. further showed that the decision of symmetric vs. asymmetric division is regulated by a microRNA, miR-34a. The mir-34a level sits in a “sweet spot” to regulate asymmetric division in early stage CCSCs. Overexpression of miR-34a leads to symmetric self-renewal and proliferation whereas suppression of miR-34a leads to differentiation and depletion of CCSCs. Surprisingly, miR-34a appears to exert a stronger effect on the mode of division than the canonical cell fate determinant protein Numb, which had been used as a marker for asymmetry in previous studies. Investigation of the interaction between miR-34a and its target Notch1 revealed that miR-34a generates a bimodal Notch1 distribution, which produces binary cell fate decisions, whereas Numb regulates Notch1 in a more graded, continuous fashion. Besides targeting Notch (Notch1-2, JAG1, DLL1), miR-34a simultaneously target many genes that are involved in other aspects of cellular functions. Downstream of p53, miR-34a targets include BCL2 (apoptosis), CD44 (adhesion and migration), Myc, MycN (oncogene), SIRT1, HDAC1 (epigenetic modification), FOXP1 (pluripotency), WNT1, and MAP2K1 (proliferation). Therefore, the combination of its ability to generate binary response in its target genes and its ability to target many genes simultaneously makes miR-34a a master regulator of CCSC asymmetric division. miR-34a is suppressed in late stage CCSCs, leading to increased symmetric division and proliferation.

3. Dey-Guha I, et al. Proceedings of the National Academy of Sciences of the United States of America. 2011.