Endometrial cancer, the fourth most common malignancy [1], predominantly affects women in their post-menopausal years [2]. It is classified as type I or type II based on clinical, endocrine and epidemiological characteristics [3, 4]. Type I endometrial tumors are estrogen dependent, associated with endometrial hyperplasia and treatments lead to favorable outcomes [3]. Type II tumors are estrogen independent, associated with endometrial atrophy and have less favorable outcomes [3]. According to histopathological characteristics, the most common subtypes are endometrioid carcinoma, serous carcinoma, carcinosarcoma and clear-cell carcinoma [5].

Malignant tumors are characterized by altered expression of a number of molecules that require post-translational activation by proprotein convertases (PCs) [8]. PCs are a family of serine proteases, seven of which (furin, PC1/3, PC2, PC4, PACE4, PC5/6 and PC7/8) share a consensus cleavage motif of (K/R-(X)n-(KR)↓(n = 2, 4 or 6, X is any other amino acid) [9]. PCs are ubiquitously expressed in normal conditions and have a number of functional roles in cancer [10]. We recently demonstrated that the well characterized PC furin is significantly up-regulated in the uterus of post-menopausal women with endometrial cancer [7]. Consistent with this, total PC activity was also significantly increased in uterine lavages of endometrial cancer patients compared to control post-menopausal women [7], raising the possibility of using uterine lavages to detect endometrial cancers [7]. However, even though uterine lavages can be collected relatively non-invasively [11–13], blood contamination and inconsistencies in sample recovery present practical barriers to the application of uterine lavage for routine clinical application in this context [14].

Correlation of PC activity in endocervical swabs and uterine lavages 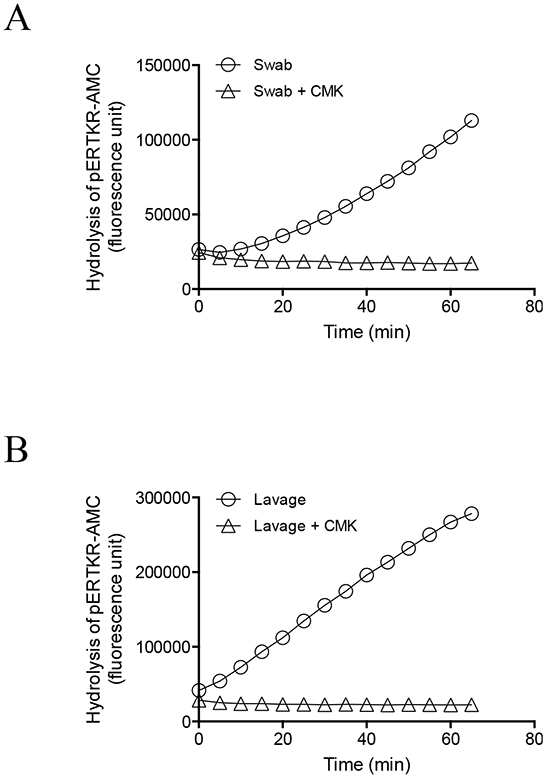 Figure 2: Inhibition of PC activity in endocervical swab and uterine lavage samples by a potent PC inhibitor, decanoyl–Arg-Val-Lys-Arg–chloromethylketone (CMK). Representative progressive curves of PC activity in the absence and presence of 100 μM CMK for swab (A) and lavage (B) are shown.

We then determined total PC activity in a total of 25 endocervical swabs collected from control post-menopausal women (n = 6) and women with endometrial cancer (n = 19). Women with endometrioid adenocarcinoma (n = 12) showed significantly higher PC activity than controls (n = 6) (Figure 3A). Other types of endometrial cancer, such as mixed/clear cell carcinoma, carcinosarcoma, endohyperplasia and mucinous, uterine serous papilla and complex hyperplasia, all showed higher PC activities than controls. However, small sample size prevented statistical analysis of each of these cancer types (Figure 3A); our limited analysis showed no significant difference between type 1 and type 2 endometrial cancer. Future studies with larger sample sizes will further investigate this. When all types of endometrial cancer were analyzed as one group (n = 19), PC activity was significantly elevated in cancer (Figure 3B). 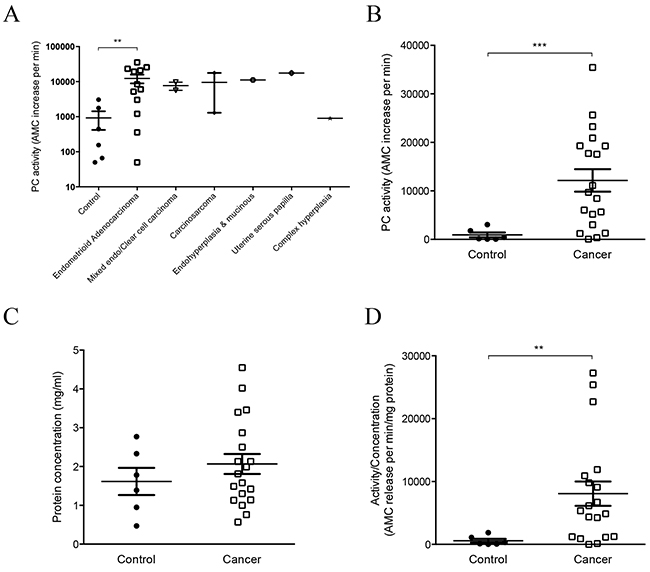 The potential utility of measuring PC activity in endocervical swabs to detect endometrial cancer was then determined by a receiver operating characteristic (ROC) analysis (Figure 4). The area under the ROC curve was 0.88 (95% confidence interval of 0.75-1.01, p=0.0056). At a cut-off value of >4125, the sensitivity was 74% and specificity was 100%. When the cut-off value was reduced to >2400, the sensitivity was 80% and specificity was 83%. These results demonstrate that determining PC activity in endocervical swabs may provide a clinically useful yet very simple screening tool to diagnose endometrial cancer in post-menopausal women. 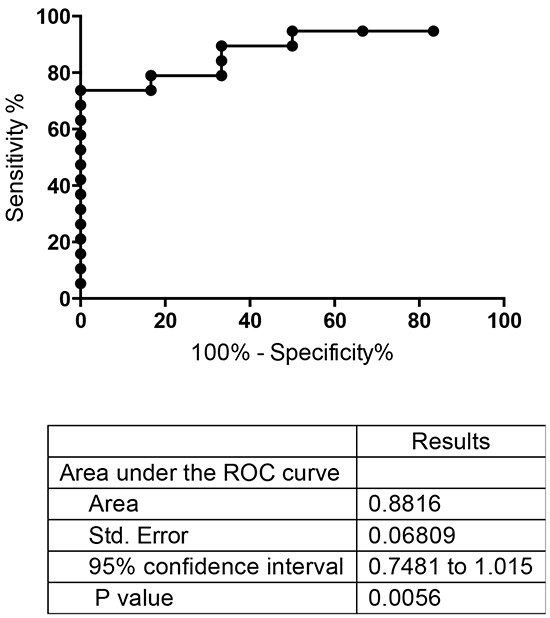 Sample collection was approved by appropriate Institutional Ethics Committees (MMCB02031B and MMC06032C) and written informed consent was obtained from individual patients. The endocervical swab was collected by placing a cotton-based swab into the endocervical neck for 1 minute to absorb the fluid surrounding that area, including uterine fluid trickled down from the uterine cavity. Each swab was then suspended in 500 μl of saline and filtered through a 0.2 μm filter by centrifugation at 4°C for 10-30 min at 4000 g. The flow through was collected, aliquoted and stored at -80°C. Immediately after the swab collection, uterine lavage was obtained from the same person as previously described [7]. In brief, 5 ml of saline was infused transcervically into the uterine cavity with a fine catheter. The fluid was aspirated, centrifuged at 1000 g for 5 min to remove cellular debris, aliquoted and stored at -80°C. Endocervical swabs and uterine lavages were collected from post-menopausal control women (n = 6) and women with endometrial cancer (total n = 19; endometrioid adenocarcinoma, n = 12, mixed endometrial/clear cell carcinoma and carcinosarcoma, n = 2, and n = 1 for endohyperplasia and mucinous, uterine serous papilla and complex hyperplasia).

Total PC activity in endocervical swab and uterine lavage samples was determined by cleavage of a fluorogenic peptide substrate pERTKR-AMC (Bachem, Torrance, CA, USA) [15]. Neat samples (50 μl) were incubated at 37°C with 100 μM (final concentration) substrate in ½ area 96-well plates. The real-time kinetics of substrate hydrolysis, resulting in the release of AMC, was monitored every 5 min at excitation/emission of 355/460 nm (Wallac Victor 2 spectrophotometer, PerkinElmer, MA, USA); the rate of substrate hydrolysis (AMC released per min) was then calculated from the linear phase of each real-time kinetics progression curve. In a separate experiment to confirm assay specificity, PC activity in representative swabs and lavages was assayed in the absence and presence of the PC inhibitor decanoyl–Arg-Val-Lys-Arg–chloromethylketone (dec-RVKR-CMK, otherwise referred to as CMK) (Bachem, Bubendor, Switzerland) [7]. Total protein concentration of each swab and lavage sample was determined by nanodrop (ND-1000, Biolab group, Australia).

This work was supported by the National Health and Medical Research Council of Australia [Project grant #1044182 and Fellowship #1041835 (to GN)]. The CASS foundation, The Ovarian Cancer Research Foundation and the Victorian Government Operational Infrastructure Support Program. We thank research nurse Nicole Fairweather for collecting the clinical materials, and the patients who kindly donated uterine lavage and endocervical swab samples for this study.