Osteosarcoma, one of the most common types of malignant primary bone tumors, is characterised by the direct formation of immature bone or osteoid tissue by tumor cells, and is most prevalent in children and young people [1, 2]. In the 1970s, adjuvant chemotherapy for osteosarcoma was introduced to supplement standard treatments such as surgery and radiotherapy, and resulted in a high five-year survival rate [3, 4]. However, the survival of patients with initial pulmonary metastases and recurrent disease remained low [5]. Other side effects, such as bone disability, physical dysfunction and drug toxicity of chemotherapy, seriously reduce patients’ quality of life, bringing a heavy medical burden to their families and the society [6]. To date, the pathogenesis of osteosarcoma remains unclear.

Recent molecular studies have suggested that genome dysfunction contributes to tumorigenesis [7, 8]. Mutations and abnormal expression of certain genes, such as those encoding microRNA, interleukin family proteins and cytochrome P450 superfamily members, facilitate the development of tumors and other malignant diseases [9–12]. Angiogenesis is a critical process to promote tumor cell proliferation and metastasis through the formation of new capillaries [13, 14]. Vascular endothelial growth factor (VEGF) is an important stimulator of physiological and pathological angiogenesis that acts on vascular endothelial cells and promotes human blood vessel growth during tumor formation and growth, enabling invasion and metastasis [15–17]. Increased VEGF expression has been detected in tumor tissue, blood and urine samples from patients with esophageal, prostate, lung, and other cancers.[18–21].

VEGF is located at chromosome 6p21.3 and comprises a 14-kb coding region with eight exons and seven introns [22, 23]. Several single-nucleotide polymorphisms (SNPs) have been described for the VEGF gene [24, 25]. Some of these polymorphisms, including those in the promoter and 5’-untranslated region, have been shown to alter the expression and biological activity of VEGF [26]. In 2014, Wang et al reported the first case-control study showing that +936 C/T was associated with a significant increase in osteosarcoma risk [27]. To date, the three most common VEGF polymorphisms, namely +936C/T (rs3025039), +1612G/A (rs10434), and –634G/C (rs2010963), have been investigated for their association with osteosarcoma risk, but the results have been inconsistent. Therefore, we conducted a comprehensive meta-analysis of all published studies to determine the association between VEGF polymorphism and osteosarcoma susceptibility more accurately. Our meta-analysis was performed according to the Preferred Reporting Items for Systematic Reviews and Meta-Analyses (PRISMA) statement [28, 29]. No ethical issues were involved in this study, given that our data were based on published studies.

Forty studies were identified through literature searching. In accordance with the selection criteria described in the Methods, 23 studies were excluded for duplication in the first step of title screening, and 17 studies were excluded for other reasons (two were review articles, five were not case-control studies, and eight were fundamental biology studies) during the systematic screening. Ultimately, seven articles were included in this meta-analysis (Figure 1, Table 1), all of which involved Chinese populations [27, 30–35]. For the +936C/T polymorphism, the seven studies included a total of 1,350 cases and 1,706 controls [27, 30–35]. For the +1612 G/A polymorphism, the six studies included a total of 1,166 cases and 1,524 controls [27, 30–32, 34, 35]. For the –634 G/C polymorphism, the six studies involved a total of 1,166 cases and 1,524 controls [27, 30–32, 34, 35]. All the included case-control studies used the polymerase chain reaction-restriction fragment length polymorphism (PCR-RFLP) method. In three studies of the +936C/T polymorphism, the genotype distribution of the controls deviated from Hardy-Weinberg equilibrium (HWE) [30, 33, 34]. 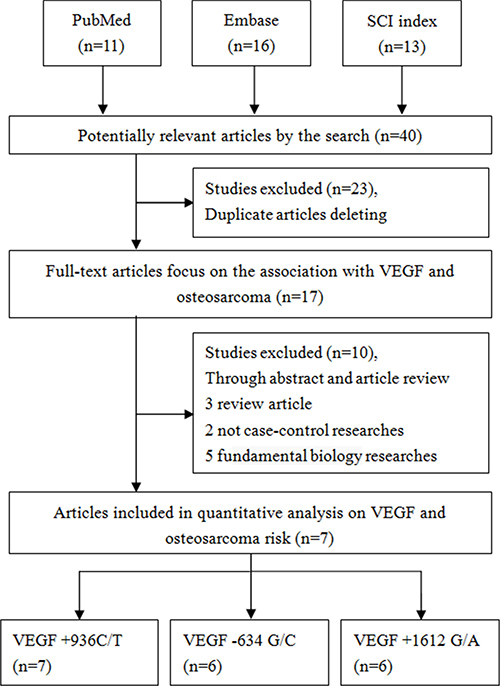 Table 1: Characteristics of case-control studies on VEGF polymorphisms and osteosarcoma risk included in the meta-analysis 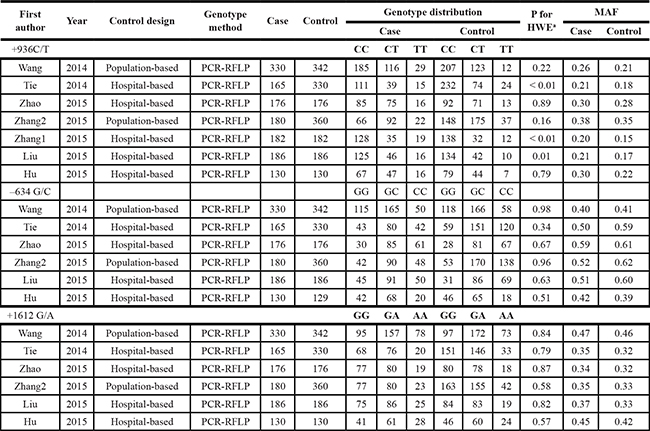 For the +936C/T polymorphism 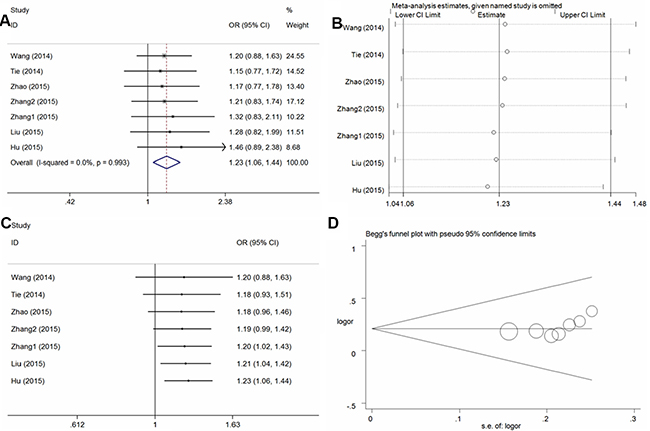 Figure 2: Statistical analysis of the association between the VEGF +936C/T polymorphism and osteosarcoma risk in the CT + TT vs. CC model. (A) ORs and 95% CIs; (B) sensitivity analysis; (C) cumulative analysis; (D) publication bias.

I2 for heterogeneity test. 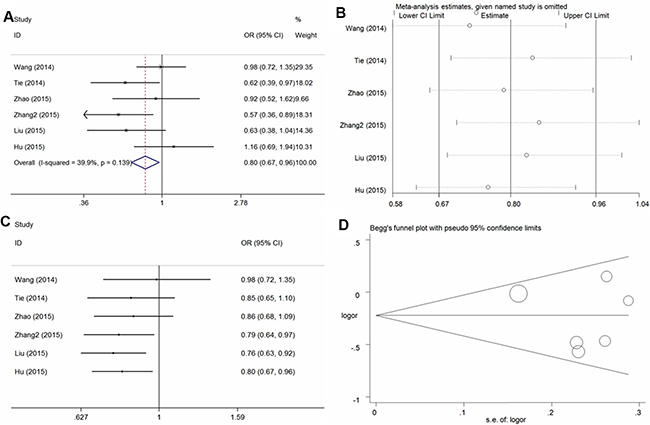 Figure 3: Statistical analysis of the association between the VEGF – 634G/C polymorphism and osteosarcoma risk in the GC + CC vs. GG model. (A) ORs and 95% CIs; (B) sensitivity analysis; (C) cumulative analysis; (D) publication bias. 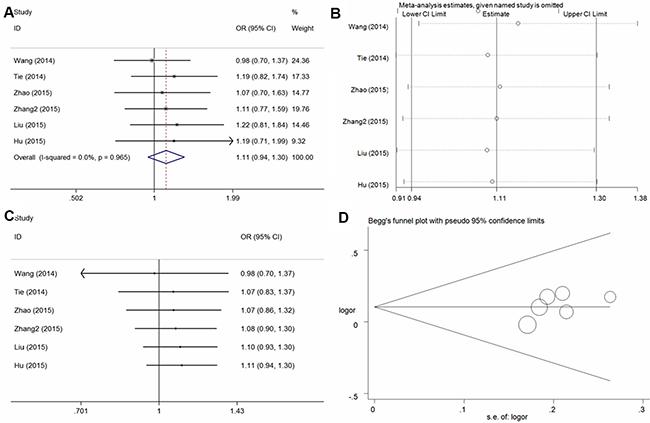 Figure 4: Statistical analysis of the association between the VEGF +1612G/A polymorphism and osteosarcoma risk in the GA + AA vs. GG model. (A) ORs and 95% CIs; (B) sensitivity analysis; (C) cumulative analysis; (D) publication bias.

Angiogenesis is a critical cause of proliferation, invasion, and metastasis in cancer [36]. VEGF is one of the most important cytokines in angiogenesis, which can promote the mitosis of vascular endothelial cells and accelerate the formation of new blood vessels [37]. High expression of VEGF in the primary tumor has been found in certain types of malignant tumors with high metastatic rates and poor prognoses, such as breast, esophageal and colorectal cancers [38, 39].

Studies of osteosarcoma have strongly suggested that higher VEGF expression and activity in primary tumor tissue correlates with increased local microvessel density, faster development of pulmonary metastasis, and poorer prognosis for osteosarcoma patients [40, 41]. An increasing number of studies are focusing on the associations among gene mutations (particularly SNPs), protein expression/activity, and tumor occurrence. Wang et al. [27] conducted the first case-control study of the VEGF gene and reported that the +936C/T polymorphism was associated with increased osteosarcoma risk in a Chinese population (T vs. C: OR = 1.31, 95% CI = 1.02–1.68, P = 0.04; TT vs. CC: OR = 2.70, 95% CI = 1.34–5.45, P < 0.01). Since then, a series of case-control studies have been conducted, but the conclusions have been inconsistent. In 2016, Zhang et al. [42] conducted a meta-analysis and observed that VEGF –634 G/C and +936 C/T polymorphisms were significantly associated with osteosarcoma risk. However, their meta-analysis only included three case-control studies. To date, four additional studies have explored the associations between VEGF polymorphisms and osteosarcoma. In our meta-analysis of seven eligible case-control studies, more precise associations between the three most common polymorphisms in VEGF (+936 C/T, –634 G/C, +1612 G/A) and osteosarcoma susceptibility were investigated than in the previous meta-analysis. All the results revealed that the VEGF +936 C/T polymorphism significantly increased the risk of osteosarcoma in the Chinese population. Subgroup analyses based on the HWE status and control design also identified similar risks. Interestingly, our results suggested that the VEGF –634 G/C polymorphism protects against osteosarcoma development. However, no significant association between VEGF +1612 G/A and osteosarcoma susceptibility was observed. These inconsistent findings among the three SNP loci indicat that different polymorphisms exert different effects on gene function, even when they are located at the same unit.

Meta-analysis is an effective method of combining the quantitative results of previous studies in order to derive a pooled summary conclusion through statistical measures [43, 44]. This can reduce the risk of drawing incorrect conclusions based on insufficient methods or small sample sizes. We conducted this meta-analysis to comprehensively investigate the relationships of VEGF polymorphisms (+936C/T, – 634 G/C, and +1612 G/A) with osteosarcoma susceptibility. None of the studies evaluated herein displayed significant heterogeneity or publication bias within the three common polymorphism loci. All the pooled data yielded consistent results, which not only confirms the validity of our results, but also supports our statistical methods.

However, there were some limitations to our meta-analysis. First, only seven eligible studies were collected, and the limited number of studies with small sample sizes may have affected the analysis of the correlation between VEGF polymorphisms and osteosarcoma susceptibility. Second, all the included studies were conducted with Chinese subjects. Ethnicity bias may exist because a single Asian race was examined, and the conclusions may not be applicable to other races. Third, the interactions among various risk factors, such as smoking, drinking, and other genetic factors, are crucial determinants of cancer formation. Thus, the inherent mechanism could not be explained clearly with unadjusted databases in this meta-analysis. Fourth, deviations from HWE were found in the distribution of controls in some of the included studies, possibly due to the insufficient of sample sizes or genotyping errors in those studies.

Our meta-analysis contained a large sample size, new research data and high-quality statistics. The results are credible and reliable as a preliminary exploration of the relationship between the VEGF polymorphisms and osteosarcoma susceptibility, and suggest that analysis of VEGF polymorphisms may be useful for the early clinical diagnosis and treatment of osteosarcoma.

In summary, our meta-analysis suggests that VEGF polymorphisms are associated with osteosarcoma susceptibility in the Chinese population. Nevertheless, additional studies including different ethnicities and larger populations are needed for further exploration of these associations.

Three online electronic databases (PubMed, Embase, and Science Citation Index) were searched with the following terms: (“osteosarcoma”) AND (“vascular endothelial growth factor” OR “VEGF”) AND (“polymorphism” OR “SNP” OR “single nucleotide polymorphism” OR “variant”), from inception to January 2016. Furthermore, all the references of the collected studies were examined so that additional relevant studies could be identified. Only English language full-text case-controls studies were included.

All the selected studies met the following inclusion criteria: (1) case-control studies focused on osteosarcoma; (2) reported on VEGF polymorphisms; (3) evaluated the association between VEGF polymorphisms and osteosarcoma risk; (4) presented adequate genotype data or data necessary to calculate the OR and 95% CI; and (5) described SNP loci which were reported in at least five publications. Studies were excluded if they: (1) were review papers; (2) were animal studies; (3) contained insufficient information for assessment of the association; (4) contained repeated or overlapping results from another study (in such cases, only the study with the largest sample size or the most recent study was included).

Two reviewers (Hu and Du) independently conducted data extraction using a standardized form. The following information was collected: the first author’s name, year of publication, sources of controls, study region or country, ethnicity of subjects (such as Asian or Caucasian), genotyping method and genotype distribution data for cases and controls. Disagreements were resolved by a third author during the analysis.

HWE was evaluated with the chi-square test using the genotypes of the controls. The association between the genotype distribution and osteosarcoma was evaluated based on the ORs and corresponding 95% CIs. For example, the pooled ORs were obtained for the allele contrast (T vs. C), co-dominant model (CT vs. CC, TT vs. CC), dominant model (CT + TT vs. CC), and recessive model (TT vs. CC + CT) in the VEGF +936C/T locus. Similar genetic models were also assessed for the other SNPs. Heterogeneity was assessed with Cochran’s Q statistic and the I2 method, and P < 0.10 or I2 > 40% were considered to demonstrate substantial heterogeneity [45]. ORs were estimated with a fixed-effects model (the Mantel-Haenszel method) when there was no considerable heterogeneity [46]; otherwise, a random-effects model (DerSimonian and Laird method) was adopted [47]. Subgroup analyses were conducted based on the classification of the study design and HWE status. Cumulative meta-analyses were conducted so that any potential trends in the pooled estimates over the study years could be identified. Sensitivity analyses were conducted, in which the stability of the results was evaluated as each study was sequentially removed for each locus. Egger’s linear regression and Begg’s funnel plots were used to assess potential publication bias. Statistical analysis was performed with STATA version 12.0 (Stata Corporation, College Station, TX, USA) with two-sided P values, and P < 0.05 was considered statistically significant.

This study was supported by grants from the Foundation of Ministry of Education of Hubei Province (D20142102) and Taihe Hospital (2013PY02, 2013JJXM011). The funders had no involvement in the study design, data collection and analysis, decision to publish, or preparation of the manuscript.