Acute myeloid leukemia (AML) is a heterogeneous disease characterized by various molecular and cytogenetic abnormalities, like chromosome rearrangements and mutations in different genes [1]. Although survival rates have improved over the last decade, still overall survival does not exceed 70% in most biological groups [2]. Pediatric AMLs with mixed lineage leukemia (MLL) rearrangements (or KMT2A, lysine (K)-specific methyltransferase 2A) represent about 20% of all pediatric AML patients [3]. The clinical outcome of this group, in general, is intermediate, however substantial differences in overall survival related to certain MLL translocation partners have been reported. In particular cases with t(10;11)(p12;q23), t(10;11)(p11.2,q23), or t(6;11)(q27;q23) represent a very poor-risk group, mainly due to early relapses. Approximately 50% of AML patients with t(10;11) and t(6;11) MLL-rearrangements will relapse during or after therapy [4]. The biological processes that determine relapse and subsequent therapy failure in MLL-rearranged AML are largely unknown.

Gene expression is regulated via transcription, RNA processing, and mRNA translation. Recently microRNAs (miRNAs) have been identified to control expression of relevant leukemogenic drivers. MiRNAs are the epigenetic fine-tuners of gene expression, and deregulation has been described in a variety of human cancer types, including adult AML [5]. MicroRNA genes are often found in chromosomal regions that are deleted, amplified or involved in translocations in cancer [6, 7]. MiRNAs can act as tumor suppressors as well as oncogenes [8]. This is determined by cell type and physiological context [9]. For instance, the oncogenic miR-17~92 cluster has been shown to be overexpressed in MLL-rearranged acute leukemias probably due to amplification of the genomic locus 13q31.3 and by direct upregulation caused by MLL fusion genes [10, 11]. Due to epigenetic modifying properties, miRNAs play an important role in the translation of mRNA into protein [12].

However, to date, the role of miRNAs in leukemogenesis in pediatric AML, especially in the process of clonal expansion towards relapse is limited. The aim of this study was to determine whether specific miRNAs are involved in, or can predict relapse development in general and, in particular, in MLL-rearranged pediatric AML.

MicroRNA profiling in a cohort of 127 de novo AML cases was performed recently by Emmrich et al [13]. To explore whether relapse can be predicted in de novo setting of pediatric AML, we compared miRNA expression profiles of de novo pediatric AML patients that eventually relapsed, with those that did not relapse. Subsequently, we performed the same comparison, only in the nested subset MLL-rearranged AML cases. Of 127 de novo AML cases, 59/127 (46.5%) relapsed after complete remission (S1 Table). No statistically significant miRNAs were identified when we compared relapsing and non-relapsing cases at diagnosis (p=0.643), neither when type II aberrations were used as a confounder. Also in the nested cohort of de novo pediatric AML MLL-rearranged cases (4 AF6, 7 AF9, 9 AF10, 1 FNBP1, 1 SEPT6, and 1 NRIP3)(S2 Table), of which 14/23 (60.9%) relapsed, no difference in miRNA expression profile was found between cases that relapsed and cases that recurred (p=0.429).

To investigate a potential role for miRNAs in clonal evolution towards relapsed disease in pediatric MLL-rearranged AML, we conducted miRNA expression profiling in a cohort of six paired initial diagnosis-relapse samples with various MLL-rearrangements (Table 1). A total of 53 significantly (BFDR<0.1) differentially expressed miRNAs were identified using the Bayesian approach (Figure 1). We observed that all these miRNAs were overexpressed (≥2 fold change) in the relapse samples compared to the initial diagnosis. None of the 53 miRNAs, turned out to be significant when were used to discriminate the de novo pediatric MLL-rearranged AML cases that relapsed from those that did not relapse based on miRNA profiles at diagnosis (p= 0.193). 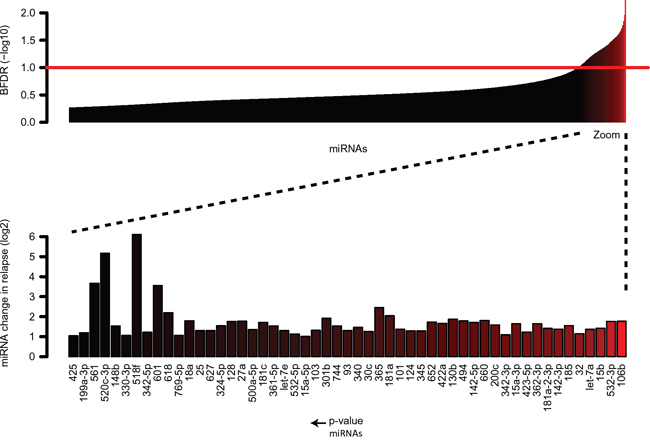 To confirm these findings, we selected 22 miRNAs, the top ten most differentially expressed miRNAs (Supplementary Figure S1) and 12 potential oncogenic miRNAs from literature, out of 53 significant miRNAs for validation with stem-loop RT-qPCR. A replication set of eight additional initial diagnosis-relapse samples with MLL-rearrangements was included in this analysis (Table 1). Among these 22 miRNAs, 12 were confirmed to be significantly upregulated in the relapse samples (Wilcoxon signed rank test; p<0.05), nine failed to pass the significance threshold, and one miRNA could not be detected in any samples.

The one-sided Wilcoxon signed-rank test was used to assess differential expression of the 22 selected miRNAs between initial and relapse samples. In subsequent analyses, miRNA-532-3p was excluded as it was undetectable with RT-qPCR. A significant overall difference was found in miRNA expression between the initial and relapse (global test p<0,001)(Figure 2 and Supplementary Table S3). 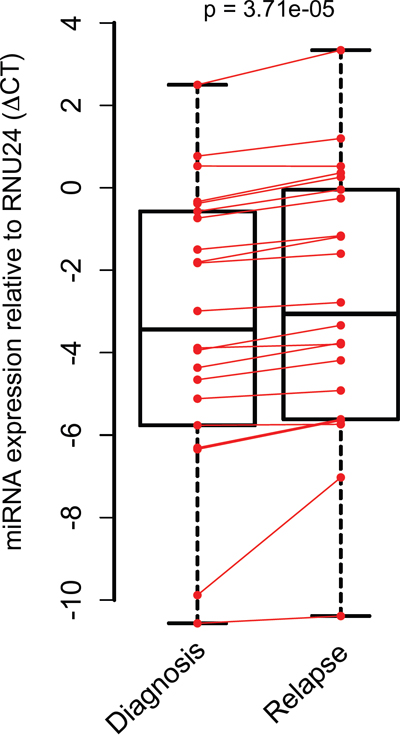 Among the 53 identified overexpressed miRNAs, miR-106b-5p was ranked as one of the most prominently overexpressed miRNAs. MiR-106b clusters together with miR-93-5p and miR-25-3p (miR-106b~25 cluster) in intron 13 of minichromosome maintenance complex component 7 (MCM7) on chromosome 7, which were part of the top list differentially expressed miRNAs. This cluster is actively co-transcribed as part of the MCM7 primary RNA transcript [14]. E2F1 transcription factor 1 (E2F1) acts as an upstream regulator of MCM7 (Figure 3A). MCM7 mRNA overexpression has previously been shown to be associated with poor outcome in solid tumors. Potentially, this may be regulated by overexpression of the hosted miRNAs [15, 16]. 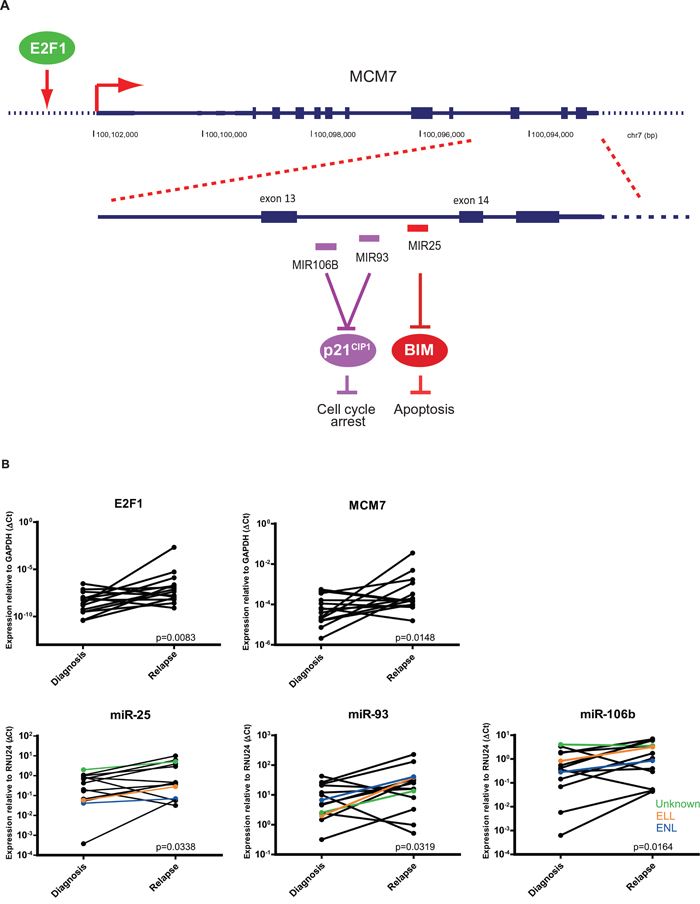 Therefore, we studied MCM7 and E2F1 mRNA (RT-qPCR) expression and could show that they were differentially overexpressed in the paired samples with MLL-rearrangements at relapse (n=14, p=0.008 and p=0.015, respectively)(Figure 3B). Overexpression of miR-106b, miR-93 and miR-25 at relapse by miRNA profiling, was confirmed by stem loop RT-qPCR in the paired patient samples, both in the replication cohort (n=8) as in the discovery cohort (n=6) (p<0.05)(Figure 3B).

The expression of the three miRNAs in the miR106b~25 cluster were, in general, consistently up- or downregulated. Among the 14 cases, four patients had one miRNA that showed opposite expression compared to the other two miRNAs within the cluster (Supplementary Figure S2). It is conceivable, that post-translational modifications such as alternative splicing of the miR-106b~25 transcript may occur, thereby separately regulating miR-25 [17], and mutations in the miRNA transcript may have induced this difference in expression. Therefore, we screened intron 13-14 of MCM7 for mutations. We did not identify mutations in intron 13-14 of MCM7 and observed that the frequency of the SNP rs1527423 was similar to that in the normal human population (data not shown). All samples (either AF9, AF10 or other TPs) showed similar miRNA expression (Figure 3B).

Downstream targets of the miR-106b~25 cluster

Multiple downstream targets for the miR-106b~25 cluster have been described in different cancer types. We selected two predicted targets of the miR-106b~25 cluster, cyclin-dependent kinase inhibitor 1A (p21WAF1/CIP1) and BCL2-like 11 (BIM) [18], based on protein function and relevance of these proteins in cancer. In the 14 paired samples we did not find differences in p21WAF1/CIP1 (p=0.43) or BIM (p=0.36) mRNA expression between initial diagnosis and relapse (Figure 4). Of the five paired initial diagnosis-relapse samples with MLL-rearrangements gene expression profiles (GEP) were available (2 AF9 and 3 AF10). Although 22 genes were found to be negatively correlated with the 53 differentially overexpressed miRNAs, p21WAF1/CIP1 and BIM were not negatively correlated with GEP (data not shown). 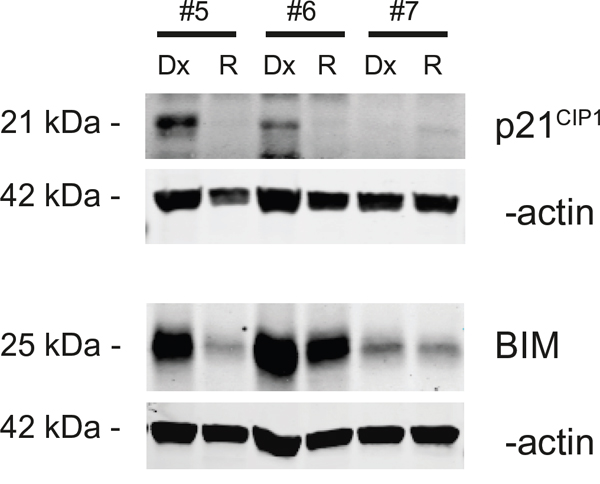 Over the last years, miRNAs are widely studied in the context of cancer development, progression, and cancer type classification [20]. Based on miRNA profiling, AML samples could be classified according to FAB type [21] or cytogenetic information [13]. However, the contribution of miRNAs in the process of clonal expansion towards relapse in pediatric AML has not been reported so far. In this study we aimed to investigate the potential role of miRNAs in clonal evolution towards relapse by miRNA expression profiling of paired initial diagnosis-relapse samples with MLL-rearrangements.

In our series of pediatric AML we could not identify miRNAs that were predictive for relapse occurrence in pediatric AML cases in the diagnostic phase. This may have been due to the heterogeneity of selected cases (n=127). However, also in a nested more homogeneous cohort of MLL-rearranged AML cases, we did not identify a miRNA signature that could predict relapse. We appreciated the fact that although we studied 23 cases (of which 9 carried a MLL-AF10 translocation) this may, in part, have been due to insufficient power to find a specific miRNA signature predictive for relapse in poor risk MLL-AML cases. We identified 53 miRNAs differentially expressed miRNAs in the development towards relapse in MLL-rearranged pediatric AML. These differentially expressed miRNAs could however again, not predict relapse. Also, this may again underscore the fact that clones that are leukemia drivers at relapse, may exist only on the subclonal level as has been revealed by NGS studies recently [22, 23].

Our results suggest that alternative miRNAs are involved in the development of a relapse. This is in line with recent findings of Bachas et al. that revealed that alternative gene expression profiles and biological pathways, are relevant for relapse development, in a paired sample analyses of relapsed pediatric AML. Approximately, 48% of these paired samples did not culminate in the same gene expression cluster. Also, paired samples that were in the same cluster had differentially expressed genes [24]. This may underscore our findings that relapse reflects clonal evolution of small undiscovered clones that may be regulated by epigenetic mechanisms, rather than by individual genes.

Of the 22 miRNAs that were validated with stem-loop RT-qPCR, 12 were significantly upregulated, including three members of the miR-106b~25 cluster. This cluster has also been identified as an oncogenic microRNA cluster in other types of cancer, such as gastric, prostate, and breast cancer [15, 25, 26]. In total, 19 (out of 22) miRNAs that were detectable are more highly expressed at relapse compared to initial diagnosis as predicted in the discovery cohort. Validation of miRNAs obtained by TLDA arrays, especially in small cohorts, is required to determine the true significantly different miRNAs.

In four patients, one miRNA within the miR-106b~25 cluster showed opposite expression. This difference could not be explained by the presence of SNP rs1527423. No other mutations were found in the miRNA gene. Although single miRNAs from this cluster were reported in adult AML. Higher miR-25 expression was found to be correlated with adverse survival [27], and higher miR-93 serum levels were described to be valued as potential biomarker for detecting AML in adults [28].

In conclusion, we show that miRNA signatures could not predict relapse in a representative cohort of pediatric AML, nor in a nested series with MLL-rearrangements. Based on paired initial diagnosis-relapse miRNA analysis we identified 53 miRNAs that may be involved in clonal evolution of in the paired samples in pediatric MLL-rearranged AML. The miR-106b~25 cluster may be involved in the development of relapse of MLL-rearranged AML which may be caused through upregulation of E2F1. Downstream predicted targets of this cluster such as p21WAF1/CIP1 and BIM, may be repressed.

The miRNAs differential expression analysis was performed using a Bayesian approach that has been implemented in the R-package ShrinkBayes. This approach has been known for its robustness in small sample series [38]. P-values < 0.05 were considered statistically significant for a single test, and Benjamini-Hochberg corrected false discovery rates (FDR) < 0.1 were considered statistically significant for multiple tests [39]. Statistical analyses were performed using R, version 3.0. MiRNA profiles were compared using global testing with a multinomal regression model [40].

This work was funded by KinderenKankervrij (KIKA) project 49 and 109.

5. Fanini F, Vannini I, Fabbri M. MicroRNAs: tiny players with a big role in the pathogenesis of leukemias and lymphomas. Hematology Reviews. 2009; 1:e8.