We previously demonstrated that cell-surface gC1qR is a key regulator of lamellipodia formation and cancer metastasis. Here, we screened a monoclonal mouse antibody against gC1qR to prevent cell migration by neutralizing cell-surface gC1qR. The anti-gC1qR antibody prevented growth factor-stimulated lamellipodia formation, cell migration and focal adhesion kinase activation by inactivating receptor tyrosine kinases (RTKs) in various cancer cells such as A549, MDA-MB-231, MCF7 and HeLa cells. The antibody neutralization of cell-surface gC1qR also inhibited angiogenesis because the anti-gC1qR antibody prevented growth factor-stimulated RTK activation, lamellipodia formation, cell migration and tube formation in HUVEC. In addition, we found that A549 tumorigenesis was reduced in a xenograft mouse model by following the administration of the anti-gC1qR antibody. With these data, we can conclude that the antibody neutralization of cell-surface gC1qR could be a good therapeutic strategy for cancer treatment.

The receptor for the globular head of complement subunit C1q, gC1qR, is first identified as a binding molecule of C1q and nuclear splicing factor (SF2-p32) [1, 2]. Although gC1qR is mainly localized in the mitochondria, it is also found on the cell-surface in various cell types such as 3T3-L1 adipocytes and A549 cells [3–7]. The cell-surface gC1qR binds to extracellular matrix components such as hyaluronic acid, fibronectin and vitronectin [8–10]. For example, the cell-surface gC1qR associates with hyaluronic acid, which is why it is also called hyaluronic acid-binding protein-1 (HABP1). In addition, the molecular association of gC1qR with C1q leads to classical complement activation [11].

Previous studies have shown that the cell-surface gC1qR could be a diagnostic marker and a new therapeutic target for cancer. The expression level of gC1qR is highly induced in various human malignant tumors, such as lung, breast, ovary, endometrial and colon tumors, compared to their normal tissues [5, 12–14]. The gC1qR expression level is inversely correlated with overall and tumor progression-free survival rate and is in proportion to the cisplatin-resistance in ovarian cancer patients [12]. Notably, the cell-surface gC1qR levels increase in breast cancer cells after tumor xenograft and gradually increased with cancer progression in an MCF10A cancer progression model [5]. 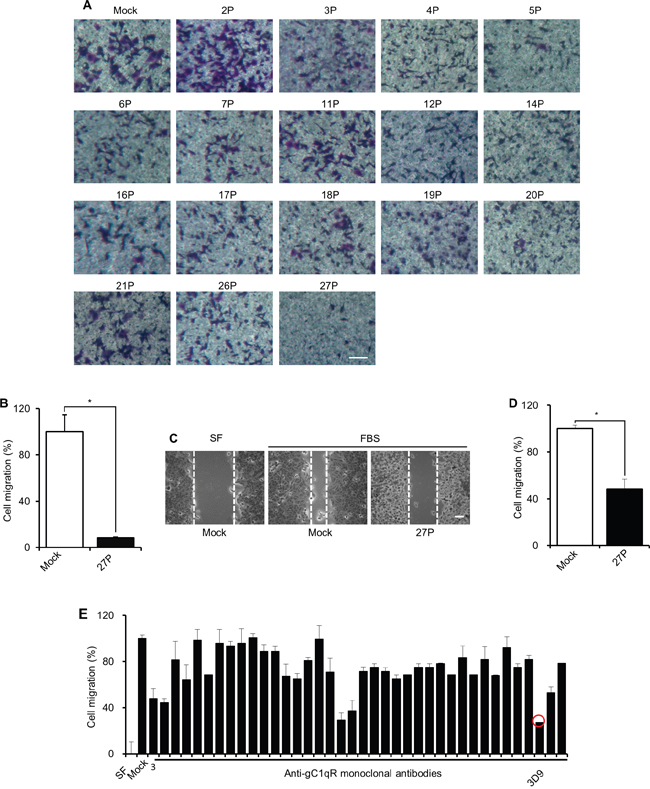 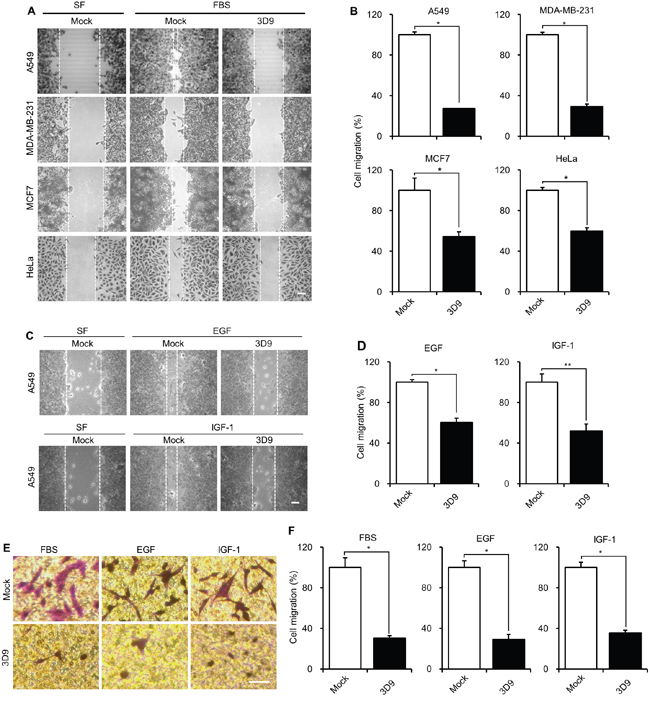 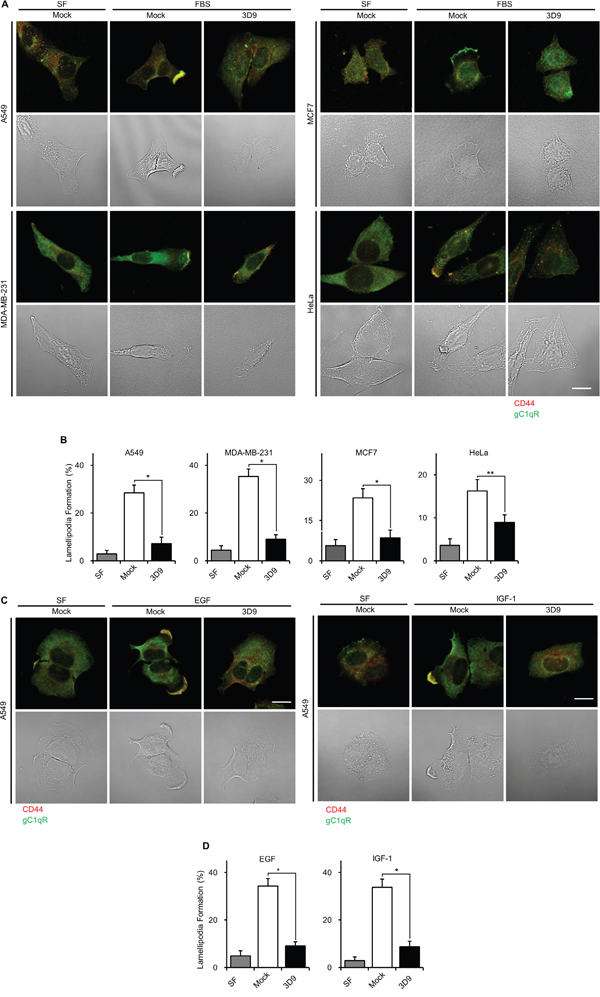 Antibody neutralization of cell-surface gC1qR prevents the activation of RTKs

Next, we tested whether mAb 3D9 affects the FBS, EGF and IGF-1 signal transduction pathways. In the presence of mock IgG or mAb 3D9, the phosphorylation of the RTKs, Akt and Erk was monitored in FBS-, EGF- and IGF-1-stimulated A549 and MDA-MB-231 cells. In contrast to mock IgG-pretreated cells, IGFR, EGFR, Akt and Erk phosphorylation was significantly reduced in mAb 3D9-pretreated A549 (Figure 4A-4C and Figure 4E-4G) and MDA-MB-231 cells (Figure 4H-4J and Figure 4K-4M). We also monitored PDGF signaling in mock IgG- or mAb 3D9-treated A549 cells. As shown in Figure 4D and Figure 4E-4G, there was no difference in the phosphorylation of PDGFR, Akt and Erk between mock IgG- and mAb 3D9-treated A549 cells. These data suggest that cell-surface gC1qR neutralization with mAb 3D9 prevents the activation of IGFR and EGFR but not PDGFR. 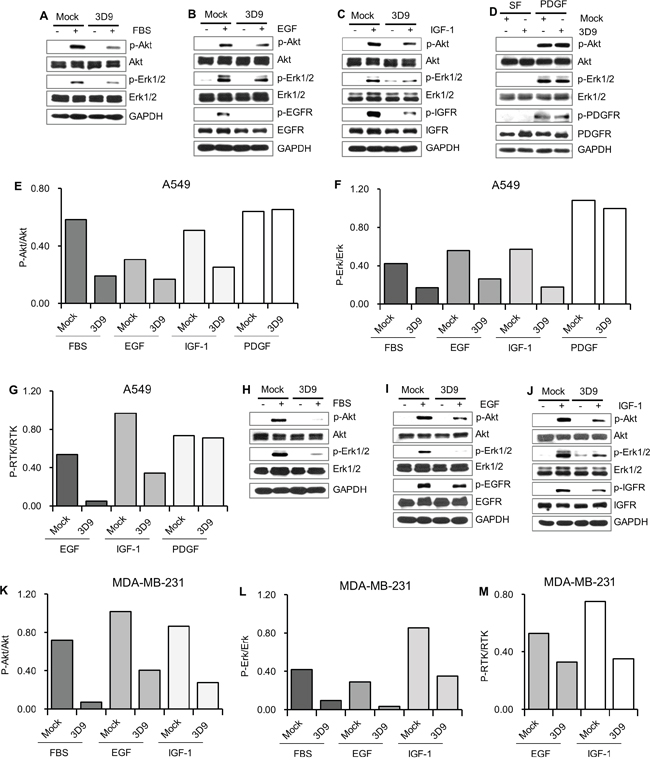 Because cell-surface gC1qR binds to various extracellular matrix components [3, 8-10, 27], antibody neutralization of cell-surface gC1qR might affect cell adhesion and spreading. We observed the cellular morphology of A549 after cell plating in the presence of mock IgG or mAb 3D9. Cell spreading was delayed in the presence of mAb 3D9 at 6 h after cell plating (Figure 5A, two upper panels). Interestingly, mock IgG-treated cells showed a dispersed growth pattern whereas mAb 3D9-treated cells had an aggregated growth pattern at 48 h after cell plating (Figure 5A, two lower panels). In the presence of mAb 3D9, the activation of focal adhesion kinase (FAK) was determined by immunoblotting and immunofluorescence. As shown in Figure 5B-5F, mAb 3D9 dramatically reduced FAK phosphorylation at Y397 and Y925 in FBS-, EGF-, and IGF-1-stimulated A549 cells but not in PDGF-stimulated cells. On the basis of these data, we conclude that the antibody neutralization of cell-surface gC1qR prevents FAK activation stimulated with FBS-, EGF-, and IGF-1 but not PDGF. 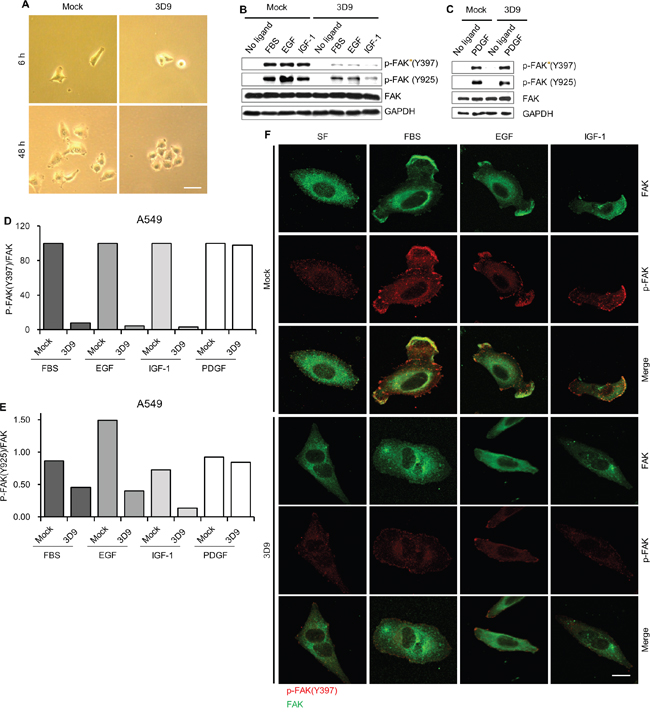 Because gC1qR is expressed on the cell-surface in endothelial cells [5, 7, 28], it is tempting to speculate that the antibody neutralization of cell-surface gC1qR might inhibit angiogenesis in endothelial cells. To address the issue, we investigated the effect of mAb 3D9 on lamellipodia formation, cell migration, tube formation and vascular endothelial growth factor (VEGF) signaling in human umbilical vein endothelial cells (HUVEC). The lamellipodial localization of cell-surface gC1qR and CD44 were observed in the HUVEC stimulated by EGM-2 containing endothelial growth factors or VEGF in the presence of mock IgG but not in the presence of mAb 3D9 (Figure 6A and 6B). The neutralization of cell-surface gC1qR with mAb 3D9 significantly reduced EGM-2-stimulated HUVEC migration and tube formation as determined by trans-well migration and tube formation assays, respectively (Figure 6C and 6D). The mAb 3D9 also decreased EGM-2- or VEGF-stimulated phosphorylation of VEGFR, Akt and Erk (Figure 6E and 6F). Based on the data in HUVEC, we conclude that mAb 3D9 could be used as an anti-angiogenic drug for cancer treatment. 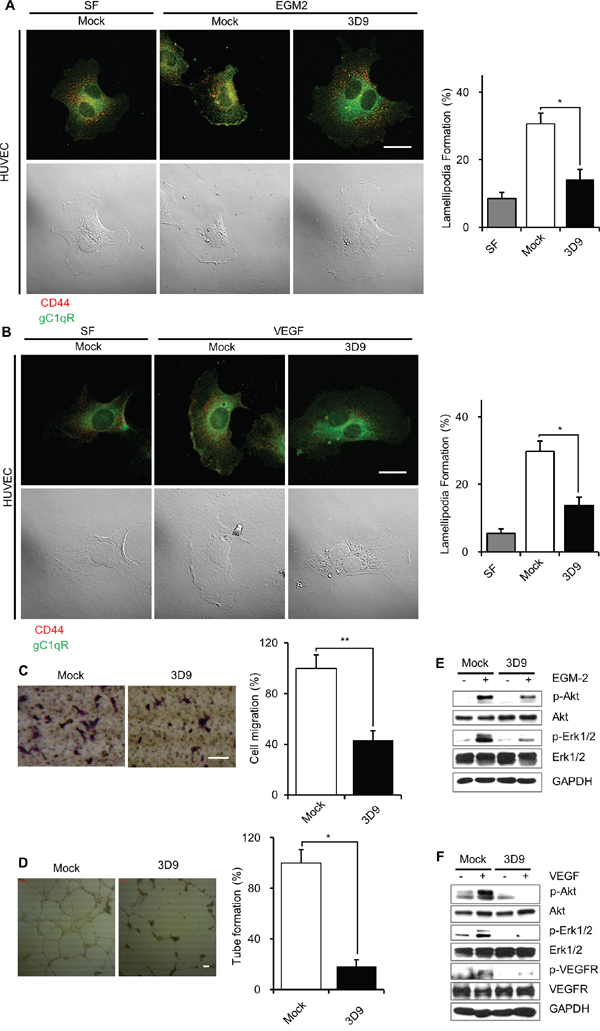 We investigated whether antibody neutralization of cell-surface gC1qR inhibits growth factors-induced cellular proliferation. As shown in Figure 7A, mAb 3D9 decreased FBS-, EGF-, or IGF-1-stimulated cellular proliferation of A549 cells. To explore the possibility that mAb 3D9 could be used as an anti-cancer drug, we next examined whether mAb 3D9 could affect in vivo tumor growth after A549 cells were subcutaneously injected into BALB/c athymic mice. Tumor size was measured for 32 days after A549 tumor-bearing mice were treated twice a week with PBS or mAb 3D9. The administration of mAb 3D9 delayed tumor growth (Figure 7B). mAb 3D9-treated mice showed reduced tumor weights and volumes after 32 days, compared to PBS-treated mice (Figure 7C-7F). These results suggest that the mAb 3D9 could be used as an anti-cancer drug. 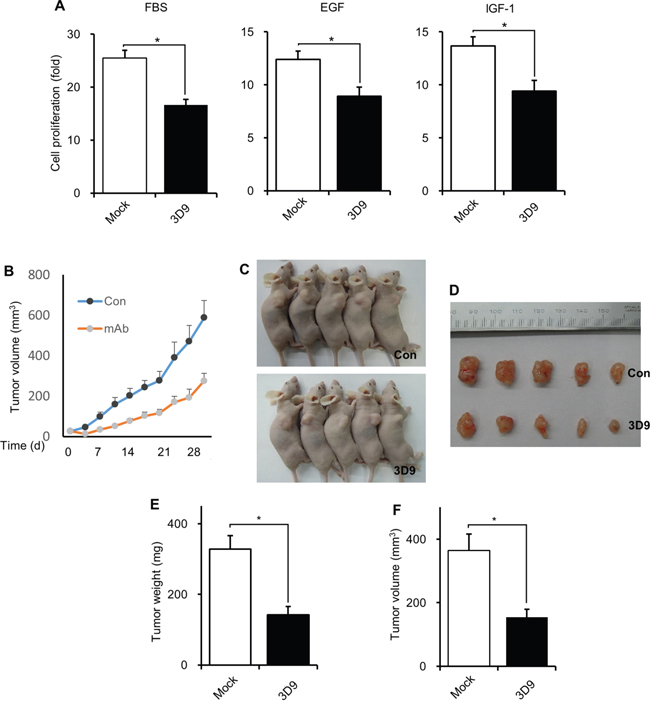 Although gC1qR is first identified as a receptor of the globular head for complement subunit C1q and as a splicing factor-associated protein, the gC1qR is mainly localized in the mitochondria and maintains mitochondrial structure and function [1, 2, 29]. The systemic disruption of gC1qR reduces the expression level of mitochondrial oxidative phosphorylation (OXPHOS) subunits, leading to mitochondrial dysfunction with reduced mitochondrial respiration [29, 30]. These findings suggest that gC1qR is a major mitochondrial protein, which is necessary for mitochondrial integrity and function. In spite of its mitochondrial localization, gC1qR has been identified on the cell-surface of various mammalian cells [2–7]. Because gC1qR interacts with plasma proteins, extracellular matrix molecules and different pathogens [2, 6, 8-10, 31, 32], gC1qR is suggested to localize in the cell-surface or extracellular space. Indeed, gC1qR is found on the cell-surface of non-permeabilized 3T3-L1 adipocytes and various cancer cells, including A549, MDA-MB435 and MDA-MB231 cells as determined by immunofluorescence or FACS analysis [3–5]. Fluorescently labeled Lyp-1 interacts with gC1qR on the cell-surface after its intravenous administration in mice [33]. Interestingly, recombinant gC1qR is also found on the cell-surface, leading to cell migration via interaction with αvβ3 integrin in B16F10 cells [34]. In addition, cell survival and tumorigenicity are enhanced via the molecular interaction between gC1qR and hyaluronic acid (HA) in gC1qR-overexpressing HepG2 cells [35]. These data indicate that gC1qR is a genuine cell-surface protein.

Because cell-surface CD44 did not appeared in the lamellipodia of growth factor-stimulated cells after antibody neutralization of gC1qR, CD44 might be involved in gC1qR-mediated lamellipodia formation. Interestingly, both gC1qR and CD44 are critical components for lamellipodia formation, because they interact with hyaluronic acid and regulate various RTKs [3, 39, 40]. In addition, there has been a suggestion for a molecular interaction between gC1qR and CD44 [6, 41], speculating that molecular association of gC1qR with CD44 is necessary for lamellipodia formation and RTK activation. However, CD44 knockdown increases PDGF signaling whereas antibody neutralization of cell-surface gC1qR did not change PDGF signaling [42]. This discrepancy of CD44 and gC1qR in PDGF signaling challenges the relationship between CD44 and gC1qR in the regulation of RTK activation and molecular mechanisms of gC1qR in RTK regulation should be carefully investigated without molecular association of gC1qR with CD44.

Cells were washed three times with cold PBS and lysed with RIPA buffer (25 mM Tris-HCL. pH 7.6, 150 mM NaCl, 1% NP-40, 1% sodium deoxycholate and 0.1% SDS) containing protease inhibitors (GenDEPOT, TX, USA) and phosphatase inhibitors (GenDEPOT, TX, USA). The cell lysates were separated using SDS-PAGE and transferred to a nitrocellulose membrane. After blocking with 5% (w/v) BSA or skim milk for 1 h in Tris-buffered saline (TBS) with 0.05% Tween 20, primary antibodies were incubated for 1 h at room temperature or overnight at 2-8°C. Next, secondary antibodies were incubated for 1 h and the target proteins were detected with x-ray film in a darkroom.

For immunofluorescence, target cells were fixed with 3.7% para-formaldehyde for 15 min, permeabilized in 0.1% Triton X-100 for 5 min and blocked with PBS containing 5% BSA for 1 h. Primary and secondary antibodies were incubated for 1 h for immunofluorescence. The fluorescence-labeled cells were analyzed with a Zeiss LSM700 Meta confocal microscope (Carl Zeiss, Germany).

First, 5×104 cells were serum-starved for 18 h, trypsinized for 4 min, pretreated with 10 μg/mL of mock IgG or anti-gC1qR antibodies for 30 min at 4°C and transferred to the upper chamber of a Boyden chamber. The cells were further incubated for 18 h after FBS (10%)-, EGF (50 ng/mL)- or IGF-1 (100 ng/mL)-containing media (600 μL) were added to the lower chamber. The cells on the membrane were fixed with 3.7% formaldehyde for 20 min and stained with 0.1% crystal violet for 20 min. Cell migration number was counted after removing the upper chamber cells with a cotton swab.

Wound healing assay was performed as previously described[43]. Cells were grown to confluency, serum-starved for 18 h and pretreated with 10 μg/mL of mock IgG or anti-gC1qR antibodies for 4 h. The cells were scraped with a sterile micropipette tip and stimulated with FBS (10%), EGF (50 ng/mL) or IGF-1 (100 ng/mL) for 12 or 30 h in the presence of 10 μg/mL of mock IgG or anti-gC1qR antibody. The cells were fixed with 3.7% formaldehyde for 20 min and stained with 0.1% crystal violet for 20 min. Images for migrated cells were captured with a microscope.

In vitro tube formation assay were performed according to Arnaouova et al. [45]. HEVEC were serum-starved in 0.2% FBS-containing EBM-2 media (Lonza, Basel, Switzerland) for 18 h. The cells were dispensed into Matrigel-coated culture plates with EGM-2 media in the presence of 200 μg/mL of mock IgG or anti-gC1qR antibody and incubated for 18 h. The cells were fixed with 3.7% formaldehyde and cell images were taken under a microscope.

Five-week-old female BALB/c nude mice were purchased from Orient Bio Inc. (Seongnam, South Korea) and maintained at 22 ± 2°C and 50 ± 10% humidity under a 12 h light: 12 h dark regimen. The Institutional Animal Care and Use Committee of the Korea Institute of Radiological and Medical Science approved the studies, which were performed under the guidelines for the care and use of laboratory animals. A549 cells (3 × 106) were subcutaneously injected into the right foreleg of mice (n = 5/group). One hundred microliters of PBS or anti-gC1qR antibody (10 mg/kg) was intraperitoneally injected twice weekly when palpable tumor developed. Tumors were measured twice weekly for 32 days and tumor size was calculated according to the following equation: V = 0.5 × (width2 × length).