We selected 19 significantly-mutated genes in AMLs, including FLT3, DNMT3A, NPM1, TET2, RUNX1, CEBPA, WT1, IDH1, IDH2, NRAS, ASXL1, SETD2, PTPN11, TP53, KIT, JAK2, KRAS, BRAF and CBL, and performed massively parallel sequencing for 114 patients with acute myeloid leukemias, mainly including those with normal karyotypes (CN-AML). More than 80% of patients had at least one mutation in the genes tested. DNMT3A mutation was significantly associated with adverse outcome in addition to conventional risk stratification such as the European LeukemiaNet (ELN) classification. We observed clinical usefulness of mutation testing on multiple target genes and the association with disease subgroups, clinical features and prognosis in AMLs.

In the present study, we have comprehensively reviewed recent literatures on AML mutations and selected target genes which show relatively high frequencies (NPM1, FLT3, IDH1/2, CEBPA, DNMT3A, WT1), adverse prognostic impact (TET2, ASXL1, NRAS, KRAS, KIT) and associations with secondary/therapy related myeloid neoplasm/cytogenetic abnormalities (JAK2, TP53, PTPN11, BRAF, CBL, SETD2) [5, 12, 14–22]. And we investigated mutation profiles of these 19 genes selected genes [5, 12, 14–22] and their association with clinical parameters and outcomes in Korean patients with AML. Our data suggested a significant impact of DNMT3A mutations over other conventional prognostic factors. Investigation on a relatively homogeneous population from a single institute will provide valuable information to the current knowledge on the impact of gene mutations on AMLs, together with molecular epidemiological insights on this regional population.

* Cytogenetic results were unavailable or inconclusive

The overall fold coverage (read length/number of reads) was over 1000× (range: 1030-4830×) in all target regions except for some focal regions in KRAS, CEBPA and TET2 (Supplementary Figure S1). Among the 199 variations called and filtered, 166 (83.4%) were confirmed by Sanger sequencing (Supplementary Table S2 and S3). Because 3′-part of CEBPA was sequenced with very low coverage, Sanger sequencing results were integrated as a supplementation. The detection rate of FLT3-ITD by massively parallel sequencing was low (9 of 34 positive cases), especially in those with low mutant allele proportion, so clinical testing results were also integrated.

As a total, ninety-two (80.7%) cases had at least one mutation in the 19 genes investigated, suggesting that this panel could be used effectively as initial workup of AMLs. For all confirmed mutations, we statistically analyzed mutation profiles according to clinical and cytogenetic subgroups (Figure 1 and 2). 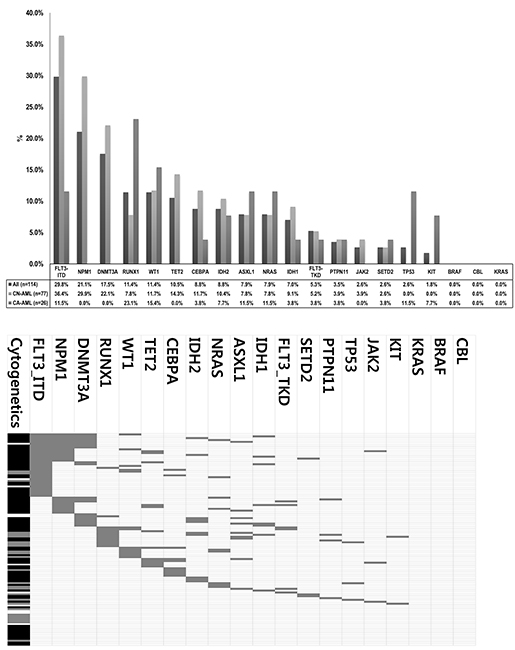 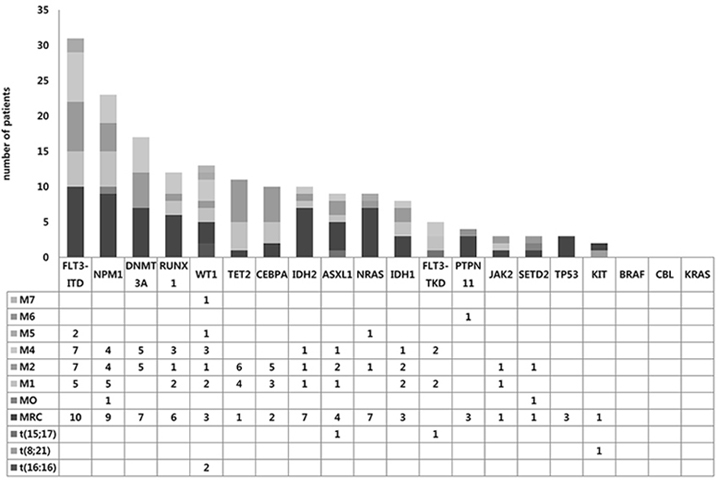 Figure 2: Mutation spectrums according to the 2008 WHO Classification. Proportion of mutations in each gene according to AML subgroups.

NPM1 mutations tended to co-occur with DNMT3A (P<0.001) and FLT3-ITD mutations (P<0.001) while DNMT3A mutation was frequently concurrent with IDH1/2 mutation (P=0.002) (Table 2). In line with several previous reports [24–28], high degrees of mutual exclusivity existed between IDH1 and IDH2, WT1 and IDH1/2, and DNMT3A and CEBPA mutations. We also newly observed a high exclusivity between DNMT3A and RUNX1 mutations.

Table 3: Mutation profile according to cytogenetic abnormality and de novo and secondary/relapsed cases

Table 4: Comparison of mutation profiles and clinical characteristics between AML-MRC and AML-NOS

Complete remission and relapse rates according to mutation status

Overall survival according to mutation status 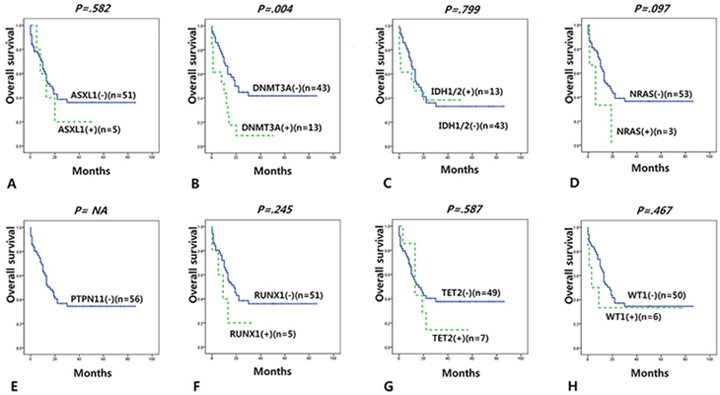 Figure 3: Overall survival according to gene mutations in intermediate group (adult de novo CN-AML with other than mutated NPM1 without FLT3-ITD) according to the ELN classification. 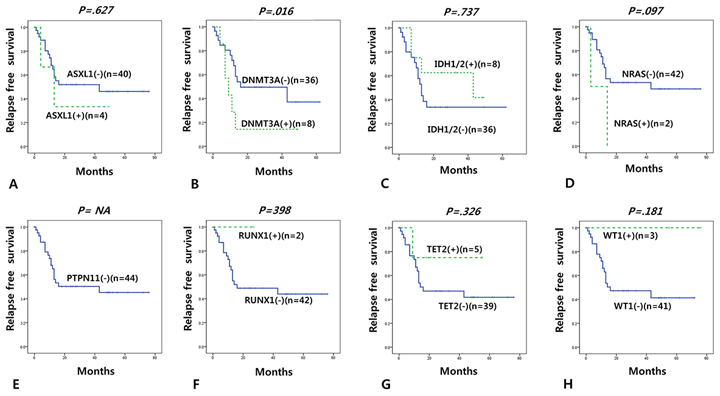 Figure 4: Relapse free survival according to gene mutations in intermediate group (adult de novo CN-AML with other than mutated NPM1 without FLT3-ITD) according to the ELN classification.

Considering the high prevalence of gene mutations in AML their prognostic impact and disease monitoring, mutation profiling at initial diagnosis may be necessary in addition to the conventional workups [4, 6, 30]. Recent high throughput sequencing technologies may be useful for detecting mutations in a number of target genes [19, 31, 32]. Compared to the whole genome or exome sequencing with highly sophiscated, time-consuming and intensive efforts, targeted gene sequencing may be a practical and ideal method for clinical testing in AML, with low cost, short turnaround time and less burden for bioinformatics [31, 33, 34]. Through a custom targeted panel, we could detect most of the target sites with high fold coverages (>1,000) and more than 80% of cases had at least one mutation in the genes investigated, suggesting the targeted sequencing strategy could be useful for initial workup. However, we had suboptimal coverages for CEBPA, where guanine-cytosine (GC) content is high and PCR amplification is problematic, and FLT3-ITD region, where large tandem duplication is common and short amplicon sequencing can miss some mutations. So for such mutations, conventional Sanger sequencing or PCR-fragment length analysis may be needed as a supplement [35].

The impact of FLT3-ITD, NPM1 and CEBPA mutations on clinical outcome are well-established now, as implemented in the ELN classification [2, 28]. However, we observed particularly significant impact of DNMT3A mutations in the favorable or intermediate risk ELN group. As well, relapse rate of DNMT3A-mutated cases was significantly higher than unmutated cases (80.0% vs. 38.9%, P=0.034). Ahn et al [39] also reported poor prognostic impact (short OS, short RFS and high relapse rate) of DNMT3A R882 mutations in Korean patients with CN-AML after hematopoietic cell transplantation. Other previous studies also support that DNMT3A mutation can be an important prognostic factor [25, 26, 40–42] although some studies failed to find such associations [38, 43]. DNMT3A mutation was known to be more frequent in CN-AMLs, and we surprisingly observed a high exclusivity of the mutations in CN-AMLs compared CA-AMLs (22.1% vs. 0%). This might be due to the small number of CA-AMLs analyzed but should be further investigated in an extended set of patients. Considering the high positive rates and possible clinical implications, we may suggest that DNMT3A can be used in routine diagnostics and as an additional factor to the ELN risk stratification. We also observed possible prognostic implication of some genes with lower frequencies, including WT1, PTPN11, NRAS and ASXL1. Comprehensive mutation profiling may be needed when clinical implication of these rare mutations is established by future large studies and meta-analyses.(35)

In conclusion, we observed the recurrent mutation profile and their clinical significance using Korean AML patients. Although relatively small number of enrolled cases and heterogeneous population, it is first comprehensive mutation analysis using Korean patients. Considering the wide heterogeneity in mutational spectrums and clinical characteristics, it will be essentially needed to accumulate more data on the mutational profile and clinical associations in AMLs from different centers and working groups.

We obtained bone marrow samples from 114 patients with AML diagnosed at Samsung Medical Center from 2008 to 2012, as well as peripheral blood samples from 4 healthy controls. Genomic DNA was isolated using the Wizard Genomic DNA Purification kit (Promega, Madison, WI, USA). Diagnosis are based on 2008 WHO classification of tumors of haematopoietic and lymphoid tissues [23]. AML-MRC was defined as AML with morphological features of myelodysplasia or a prior history of a myelodysplastic syndrome (MDS) or myelodysplastic/myeloproliferative neoplasm (MDS.MPN), or MDS-related cytogenetic abnormalities, and absence of the specific genetic abnormalities. AML-NOS were classified according to morphology, cytochemical statin and/or immunophenotypic results. Chromosome study was performed with a standard protocol and karyotypes were described according to the International System for Human Cytogenetic Nomenclature (ISCN) 2009. The Institional Review Board at Samsung Medical Center approved the current study (IRB No. 2014-05-016-002).

A schematic overview of bioinformatics analysis is presented in Supplementary Figure S12. After quality control by the SAMtool and fastQC softwares,(46) raw files were aligned to the human reference genome (build GRCh37) using the Burrows-Wheeler Aligner (BWA) with default parameters.(47) Local alignment was done with the Genome Analysis Toolkit (GATK), followed by variant calling by the GATK-Haplotype caller and Varscan algorithms.(48) Read depth and coverage were estimated using the BEDTools.(49) Called variants were annoatated using the SnpEff software(50) and filtered according to the following strategy; i) variation calls detected in normal healthy control were excluded, ii) only missense, nonsense, framshift, start gain and splice site mutations were included, iii) variations found over 0.1% of general population in public databases (NCBI dbSNP and ESP6000)(51) were excluded, iv) only variations with allele frequecy >20% in GATK-Haplotype caller and/or Varscan were included, and v) variants were further filtered by visual inspection on Inegrative Genomics Viwer (IGV) [45]. SIFT and PolyPhen softwares [46, 47] were used for in-silico analysis of damaging effects of missense variations.

Crosscheck and validation by Sanger sequencing

Statistical analysis was performed using the PASW Statistics 20.0 software (IBM, Armonk, NY, USA). Significance between categorical data was calculated by Chi-square or Fisher’s exact tests. Differences in survival between mutation groups were analyzed by Kaplan–Meier estimates. Multivariable Cox regression analysis was performed to examine the impact of mutations along with other clinical variables. OS was measured from the time from diagnosis to death or last follow-up. RFS was defined only for patients achieving CR, measured from the date of achievement of a remission until the date of relapse or death from CR, death or any cause. A P-value of <0.05 was considered as statistically significant.

We gratefully acknowledge contributions of participants enrolled in this study. This research was supported by Basic Science Research Program through the National Research Foundation of Korea (NRF) funded by the Ministry of Education (NRF-2012R1A1A2043879).