Platelets as an indicator of vascular repair in elderly Japanese men

To investigate the correlation between platelets and circulating CD34-positive cells as a marker of vascular repair (endothelial repair and atherosclerosis development), we conducted a cross-sectional study of 567 men aged 60-69 who underwent an annual health check-up between 2013 and 2015.

Table 1: Characteristics of the study population based on hypertension status

Platelets and other variables in relation to hypertension

Table 2: Simple correlation coefficient of platelets and other variables 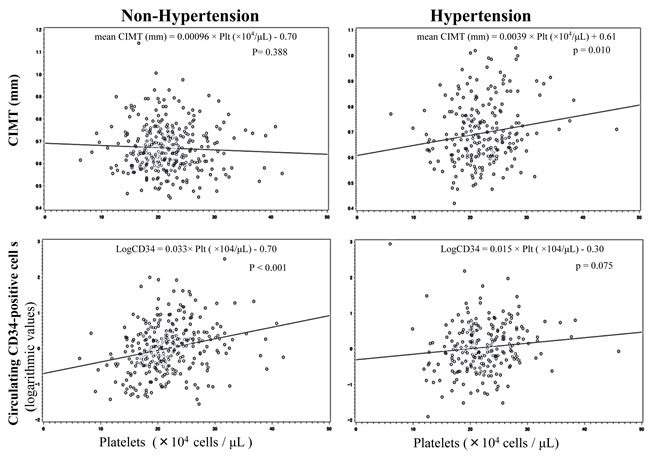 Platelets play an important role in vascular inflammation and vessel wall remodeling [14,15]. Injury to the arterial endothelial cells causes exposure of sub-endothelial components, notably collagen [16,17] and von Willebrand factor [18], resulting in the adherence of platelets to damaged vessel walls and their subsequent activation. Activated platelets (P-selectin-positive platelets) express or release stromal cell-derived factor 1α (SDF-1α) [1], leading to mobilization of bone marrow-derived CD34-positive cells into the peripheral blood in human acute coronary syndrome [2]. Furthermore, platelets secrete vascular endothelial growth factor (VEGF) and sphingosine-1-phosphate (S1P) [3] upon their activation. A previous study also reported that myocardial necrosis with simultaneous elevation of VEGF and SDF-1α caused significant CD34-positive cell elevation in patients with cardiovascular disease [4]. Additionally, plasma levels of S1P have been shown to lead to the trafficking of stem cells from the bone marrow to the peripheral blood [5]. Platelets are a rich source of VEGF, SDF-1α, and S1P [3], and platelet-rich plasma could enhance the proliferation of bone marrow mesenchymal stem cells, which are known to be multi-potent stem cells [6]. On the other hand, stem cells are also known to differentiate into megakaryocytes and to subsequently produce platelets [7]. Therefore, platelet count might positively correlate with the number of circulating CD34-positive cells.

Potential limitations of this study warrant consideration. Since we have no data regarding activated platelets (P-selectin-positive platelets), the exact influence of active platelets on the circulating CD34-positive cells is unknown. However, a previous study reported that platelet rich plasma enhances the proliferation of bone marrow multi-potent stem cells [6]. Therefore, we believe that the number of platelets correlates with the number of active platelets. Further studies that include data on active platelets are necessary. Additionally, as this was a cross-sectional study, we were not able to establish causal relationships.

In conclusion, our findings demonstrate that platelet count indicates vascular repair activity, and that hypertension might mask the beneficial effects of circulating CD34-positive cells. 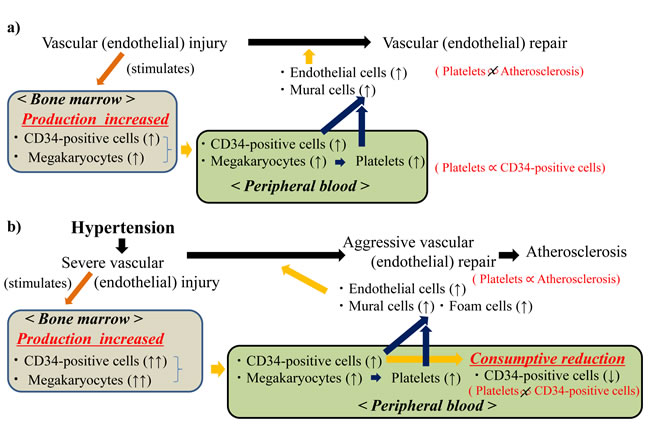 This study was approved by the Ethics Committee for Human Use of Nagasaki University (project registration number 14051404). Written consent forms were available in Japanese to ensure comprehensive understanding of the study objectives, and informed consent was provided by the participants. The study population comprised 617 male residents aged 60-69 years from the western rural communities of the Goto city and Saza town, who undertook an annual medical check-up from 2013 to 2015 as recommended by the Japanese government.

To avoid the influence of inflammatory disease and hematological disease, subjects with high and low white blood cell counts (≥10,000 cells/μL (n = 8) and 1,000 cells/μL< (n = 2), respectively) were excluded. Additionally, to avoid the influence of bone marrow- activating medications, subjects taking medicines for anemia (n = 3) were also excluded from the analysis, as were persons with missing data (n = 37). The remaining patients, comprising 567 men with a mean age of 65.5 years (standard deviation (SD): 2.6; range: 60-69), were enrolled in the study.

Fasting blood samples were collected in an EDTA-2K tube, a heparin sodium tube and a siliconized tube. The levels of platelets (Plt) and white blood cells (WBC) in samples from the EDTA-2K tube were measured at SRL, Inc. (Tokyo, Japan) using flow cytometry.

Measurement of carotid intima media thickness (CIMT) was determined by ultrasonography of the left and right carotid arteries by an experienced vascular technician using a LOGIQ Book XP with a 10-MHz transducer, GE Healthcare, Milwaukee, WI, USA). Mean values for the left and right CIMT were calculated using automated digital edge-detection software (Intimascope; MediaCross, Tokyo, Japan) and a protocol that has been described in detail elsewhere [26].

All statistical analyses were performed with the SAS system for Windows (version 9.3; SAS Inc., Cary, NC). Probability values less than 0.05 were considered to be statistically significant.

We are grateful to the staff of Goto City Hall and Saza Town Hall for their outstanding support.

The authors of this manuscript declare no conflict of interests.

This work was supported financially by a Grant-in-Aid for Scientific Research from the Japan Society for the Promotion of Science (No.15K07243, No.25440255).