Background: Androgen receptor (AR) is a promising therapeutic target for breast cancer. However, its prognostic value remains controversial in triple negative breast cancer (TNBC). Here we present a meta-analysis to investigate the correlation between AR expression and TNBC prognosis.

Materials and methods: Literature search was performed in Pubmed, Embase and Cochrane Central Register of Controlled Trials databases to identify relevant articles on AR and TNBC prognosis. Fixed- and random-effect meta-analyses were conducted based on the heterogeneity of included studies. Heterogeneity and impacts of covariates were further evaluated by subgroup analyses and meta-regression.

Conclusion: AR positivity is associated with lower risk of disease recurrence in TNBC. Further clinical studies are warranted to clarify its prognostic role on TNBC recurrence and survival.

Triple-negative breast cancer (TNBC) comprises 10-17% of breast cancer [1]. Since TNBC was insensitive to endocrine or target therapy, it was considered to have the poorest prognosis among different molecular subtypes [2, 3]. Numerous studies have been carried out on sub-classifying TNBC to find valuable prognostic and therapeutic markers. Lehmann et al. demonstrated that TNBC is highly heterogeneous and consists of various subgroups, such as basal-like, immune-modulatory, mesenchymal, mesenchymal stem–like, and luminal androgen receptor (LAR) subtypes [4], among which the LAR subgroup characterized with high AR expression and poor prognosis [5].

AR is expressed in 60-70% of breast cancer and approximate 0-53% of TNBC [6]. As a novel target for endocrine therapy, its therapeutic effect largely depends on estrogen receptor (ER) status. For ER+/AR+ breast cancer cell lines, AR activation had anti-proliferative effect [7–9]; in contrast, it induced pro-proliferative effect for ER-/AR+ cell lines. [4, 7, 8, 10]. Therefore, the antagonism of AR against ER may provide a new perspective for endocrine therapy.

Several clinical studies were conducted to evaluate AR prognostic value in breast cancer. It has been validated that AR positivity is associated with prolonged survival in ER+ breast cancer.[11–13]. However, the correlation between AR expression and prognosis remains elusive in TNBC. Study by Tang et al. suggested that absence of AR expression in TNBC served as a high-risk factor for both disease recurrence and death [14]. Similarly, several studies of (neo-) adjuvant chemotherapy reported AR positivity as an independent predictor for pathological complete response [15] and improved TNBC survival [16]. On the contrary, another cohort study revealed that AR+ TNBC had worse survival [17].

Hence, we conducted a meta-analysis including 13 studies to evaluate the prognostic value of AR in TNBC. This is the first meta-analysis to investigate the impact of AR expression on TNBC survival.

Among 4226 potentially relevant citations, 67 full-text articles were retrieved for detailed evaluation. Ultimately, 13 studies with 2826 patients were included in the meta-analysis (Figure 1) [13–25]. Both disease-free survival (DFS) and overall survival (OS) were available for 11 studies, while the other two studies had only DFS [22] or OS [23] reported. Supplementary Table S1 showed the quality assessment of included studies. 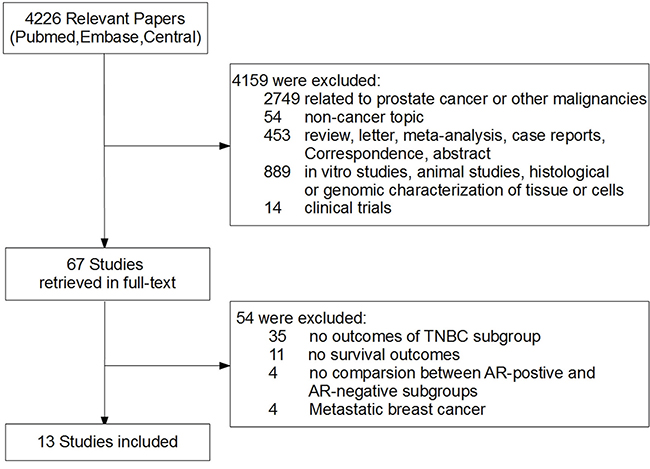 Figure 1: Flowchart of articles reviewed and included in meta-analysis.

a Score according to the percentage of positive cells and staining intensity [16]. 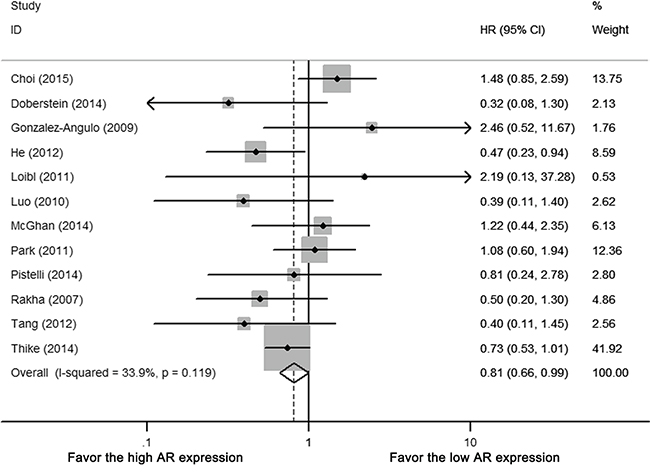 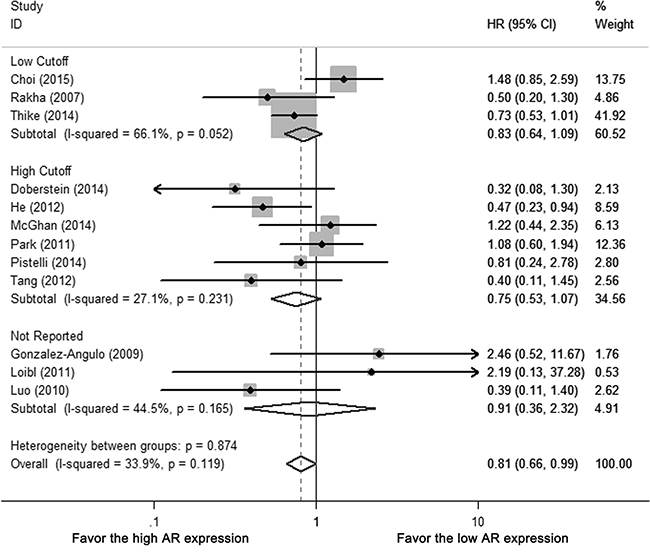 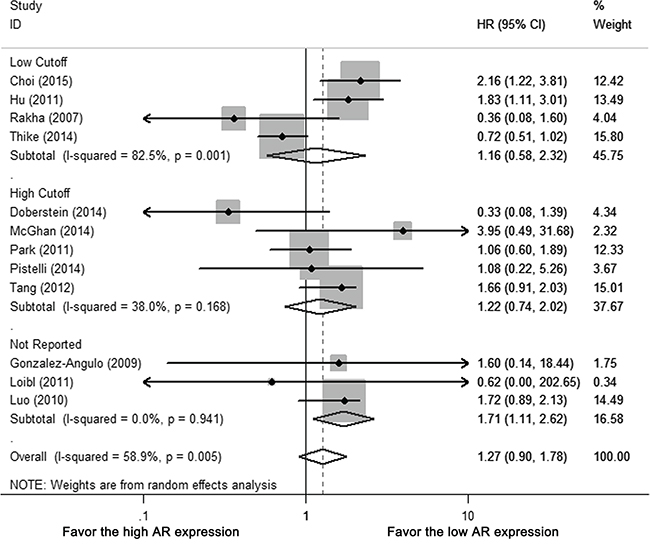 Meta-regression was performed on outcome data. None of the covariates showed statistically significant effects on DFS or OS (Supplementary Table S4).

Figure 6: Funnel plot for potential publication bias of DFS A. and OS B.

As a novel therapeutic target, AR was widely investigated in many pre-clinical and clinical studies for TNBC [17, 19, 26]. However, no consensus for its correlation with TNBC prognosis has been reached to date. Hence, we conducted this meta-analysis including 13 studies and 2826 patients to evaluate AR prognostic value in TNBC. Our study revealed that AR+ TNBC was associated with lower risk of disease recurrence. To the best of our knowledge, this is the first meta-analysis on the correlation of AR expression with TNBC prognosis.

Several studies revealed the antagonizing effect of AR against ER signaling depended on the relative levels of these two steroids receptors. They competed for co-regulatory molecules, resulting in opposite effects on cancer cell proliferation [28]. Without functional ER, AR may be the primary driver of downstream signaling and facilitate cancer progression [29, 30]. It implied that different AR and ER cutoffs could be potential confounding factors and sources of heterogeneity. Hence, we conducted subgroup analysis on AR/ER cutoff values, and proved they had no significant influence on final results. This was consistent with the meta-analysis by Vera-Badillo et al. which demonstrated AR expression incurred better prognosis irrespective of ER co-expression [11]. With ER and AR expression less than 10%, the mutual influence of ER versus AR could be negligible, therefore a suitable model to investigate AR without potential ER influence could be TNBC with ER < 10%.

Subgroup analyses showed remarkable decrease in the heterogeneity of OS in subgroups of whole-cohort TNBC patients and high AR/ER cutoffs (Supplementary Table S3), suggesting “study population” and “AR/ER cutoff values” as sources of heterogeneity. In agreement with overall result, all subgroups with different AR/ER cutoffs revealed that AR had no significant impact on TNBC OS, which provided additional evidence to AR prognostic value on OS. Moreover, the pooled results were further strengthened by data from subgroup using multi-variate analysis, since it provided more reliable data than uni-variate analysis [31].

Our studies had several limitations. First, it based on population data other than individual patient data, and restrained our ability to conduct analyses for LN metastases and other covariates. Second, all the studies were retrospective. It could potentially increase certain bias, such as selection bias. Third, we were unable to identify correlation between AR and molecular intrinsic subtypes of TNBC, especially for LAR subtype which may be helpful to clarify AR prognostic value.

In conclusion, although variability and heterogeneity existed among included studies, AR expression was associated with lower risk of disease recurrence. Since AR had a relatively high prevalence in TNBC, evaluating AR status could provide additional information on prognosis and AR-targeting therapy could be another option for chemotherapy resistant TNBC in both neoadjuvant and metastatic settings. Future clinical trials based on different molecular subtypes of TNBC are warranted to further clarify its prognostic value and efficacy of AR-targeting therapy.

We searched the following databases for relevant studies: PubMed (from 1946 to July, 2015), Embase (host: Ovid, from 1947 to July, 2015) and Cochrane Central Register of Controlled Trials (CENTRAL, from 2000 to July, 2015). The following medical subject headings, Embase Emtree terms and keywords were used: ‘Breast Neoplasms’, ‘Triple Negative Breast Neoplasms’, ‘Breast Cancer’, ‘Triple Negative Breast Cancer’, and ‘Androgen Receptor’. There was no limitation on languages or regions of publications. Reference lists of all the relevant articles were manually screened to ensure the sensitivity of the literature search.

To be eligible, studies had to meet the following inclusion criteria: TNBC patients, or studies that provided data on TNBC as a subgroup; assessment of AR expression in primary breast cancer tissue; available data of OS or DFS on patient subgroups with different AR level. Exclusion criteria included: metastatic disease; review, meta-analysis, editorial, letter or conference abstract. Two independent reviewers (C.J. Wang and B. Pan) evaluated eligibility of studies according to the above criteria. Full text of the potentially relevant studies were obtained and reviewed for inclusion by the same two reviewers. Disagreement was resolved by consensus (C.J. Wang, B. Pan, Q. Sun). Inter-reviewer agreement was assessed by Kappa Statistics according to Higgins et al. [32]

The quality of the included studies was assessed according to the STROBE checklist for Cohort Studies [33]. Each item in the STROBE Checklist was scored using an ordinal scale (1-5, with 1=Worst, 5=Best) by two independent reviewers (C.J. Wang and B. Pan). The final quality scores were the average of scores generated by each reviewer and expressed as percentages, ranging 0–100%, where higher values indicated a better methodological quality.

Statistical variables such as HR and corresponding CI were directly taken and used for the meta-analysis. Other data were presented as means and proportions, differences between groups were tested with Pearson Chi-square test. The HR of OS and DFS was chosen as the primary analytical endpoint. Fixed effects or random effects models were used based on whether significant heterogeneity existed between studies.

Publication bias was assessed by Begg’s test and symmetry of funnel plot. Statistical heterogeneity was assessed by Cochrane’s Q and I-square statistics. Cochrane’s Q test with p < 0.05 or I-square >50% indicated significant heterogeneity among included studies. To investigate potential heterogeneity across studies, subgroup analyses were performed according to methods described by Deeks et al. [31]. Meta-regression was conducted for all potential confounding factors. All the statistical tests were two-sided, and statistical significance was defined as p < 0.05. Statistical analyses were conducted by STATA version 12.0 (Stata Corporation, College Station, TX, USA).

The authors declare that they have no conflicts of interest concerning this article.