The human Ikkα gene is located at 10q24.31, close to Pten (10q23). Many studies have suggested that alterations within the 10q22-10q26 region may be involved in human SCC development. IKKα downregulation and Ikkα mutations and deletions have been reported in various types of human SCCs. A point mutation-mediated IKKα deletion has been identified in a lethal human syndrome, in which multiple organs are malformed [5]. Chemical carcinogen treatment induces Ikkα mutations and deletions in mouse skin SCCs [1]. These findings underscore the importance of IKKα in the pathogenesis of these human diseases.

Lung cancer is the leading cause of cancer mortality worldwide. Lung SCC, one of major types of lung cancers, is strongly associated with smoking that contains carcinogens. Smoking can also act as an inflammatory irritator. It is thought that SCCs, frequently found in the upper and central regions of the lungs, are derived from the basal cells (a type of squamous epithelial cell) of the pseudostratified epithelial layer of bronchi; whereas adenocarcinomas (ADCs) are derived from the epithelial cells of alveoli. Many molecular alterations, such as deregulated EGFR, PIK3CA, p53, Rb, and c-Myc, have been identified in human lung SCCs, but mice overexpressing or lacking these genes do not well recapitulate the development of lung SCCs, although a proportion of K-rasG12D;Lkb1-/- mice develop mixed SCCs and ADCs in the lungs [4,6].

Biomarkers of increased p63, Trim29, and keratin 5 (K5) are used to distinguish human lung SCCs from ADCs. We also have demonstrated increased p63, Trim29, and K5 levels, deregulated RhoV, CDK1, IGF, ROS1, c-Myc, p53, Rb, and LKB1 expression, and elevated EGFR, ERK, and p38 activity in lung SCCs derived from L-IkkαKA/KA mice [4]. Therefore, the mouse lung SCCs resemble human cancers. Interestingly, many human lung SCCs express elevated Sox2; however, the mouse lung SCCs express elevated Nanog and Oct3/4, but not Sox2 (our unpublished data), suggesting that human and mouse lung SCCs may express a different spectrum of stem cell regulators [4]. The nuclear IKKα has been shown to regulate the expression of many genes in keratinocytes through an epigenetic mechanism [2]. We further revealed that IKKα downregulation upregulates the level of H3K4me3, a positive transcription mark, and reduces the level of H3K27me3, a negative transcription mark, on the loci of p63 and Trim29 in the IkkαKA/KA SCC cell line and IkkαKA/KA MEFs compared to wild-type cells. Reintroducing IKKα reverses the levels of H3K4me3 and H3K27me3, represses the expression of ∆Np63 and Trim29 in IkkαKA/KA cells, and inhibits the proliferation of the IkkαKA/KA SCC cell line [4]. A similar regulatory mechanism for the expression of ∆Np63 and Trim29 was detected in the human lung SCC cell line. Thus, the IKKα-mediated epigenetic regulation plays a role in the pathogenesis of lung SCCs. In addition, the elevated ∆Np63 level, increased EGFR and ERK activity, and K5+ cell expansion have been detected in the epidermis of Ikkαf/f/K5.CreER and Ikkα-/- mice (our unpublished result) and in the L-IkkαKA/KA lungs [4,7], suggesting that some similar molecular mechanisms may be involved in the pathogenesis of skin and lung SCCs in these different IKKα mutant mice. 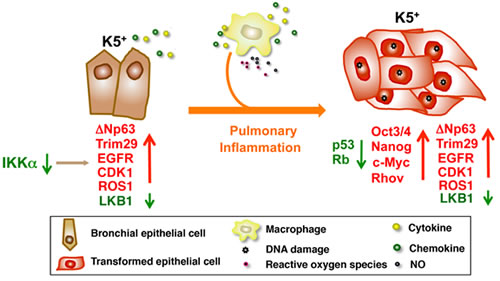 We have identified similar multi-molecular alterations in mouse and human lung SCCs [4]. Our immediate goal is to identify specific molecules, cells, or pathways that can be targeted for therapy, which will benefit human cancer patients. Using this model, we will investigate conditions for lung SCC metastasis and essential pulmonary inflammatory cell development, as well as the relationship between lung SCC and ADC pathogenesis.