Development of neo-adjuvant chemotherapy has increased the rate of overall survival and has enabled surgery, but the failure rate is still high, causing death in children and adolescents [4-7].

Novel more effective targets for osteosarcoma therapy are therefore needed. Toward this goal, αvβ3 integrin-over-expressing high-metastatic variants of the human osteosarcoma cell line 143B were previously isolated and termed 143B-LM4.

Over-expression of αvβ3 integrin in the variant selected for high-metastasis suggested that integrin maybe a promising target for osteosarcoma. The 143B-LM4 cells expressed green fluorescent protein (GFP) in the nucleus and red fluorescent protein (RFP) in the cytoplasm, and therefore could be imaged down to the subcellular level in vitro and in vivo [8].

In the present study, we tested echistatin, a cyclic RGD peptide antagonist of αvβ3 integrin (disintegrin) [10], as a molecular-targeting drug in human metastatic osteosarcoma in vitro on the highly metastatic 143B-LM4 cell line which over-expresses αvβ3 integrin described above.

The high-metastatic integrin-over-expressing 143B-LM4 cells have a strikingly bright GFP in the nucleus and RFP in the cytoplasm, in vitro (Figure 1). 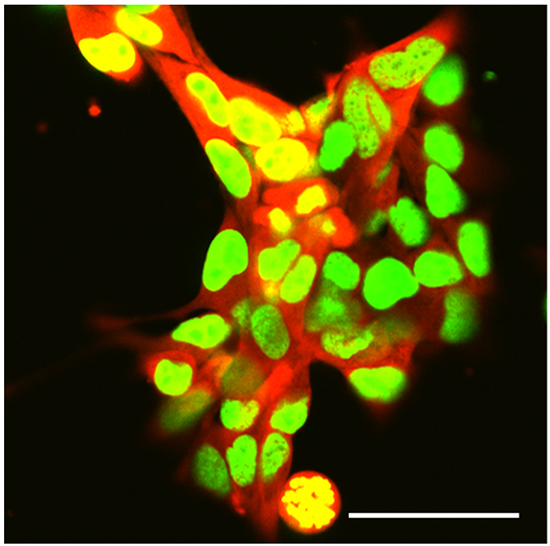 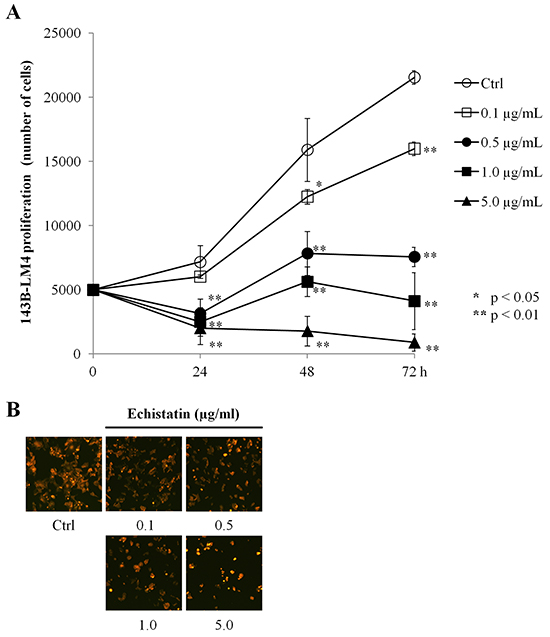 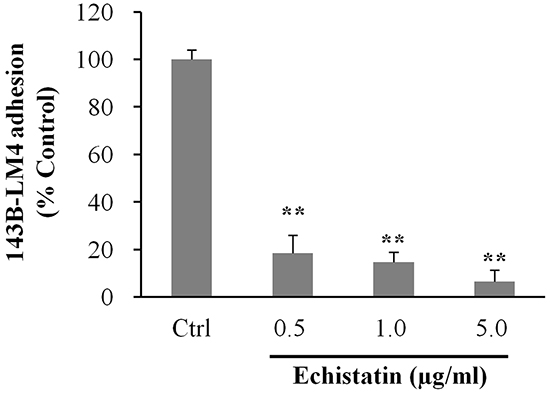 Aggressive chemotherapy of osteosarcoma in patients with metastatic or recurrent disease, most commonly in the lung [11-13], still results in poor prognosis with less than a 20% 5-year overall survival rate [14-16]. Therefore, novel targets are needed to overcome recurrence or metastasis and to improve the disease-free survival rate.

In the present study, we demonstrated that echistatin resulted in a significant decrease of cell proliferation, migration, invasion, and adhesion of 143B-LM4 cells in vitro. As 143B-LM4 is a high-metastatic variant that over-expresses αvβ3 integrin, these results suggest that αvβ3 integrin may be an effective target for osteosarcoma that has future clinical potential.

Previously-developed concepts and strategies of highly-selective tumor targeting can take advantage of molecular targeting of tumors, including tissue-selective therapy which focuses on unique differences between normal and tumor tissues [17-22].

143B-LM4 cells (5×103) were added to 96-well tissue culture plates and placed overnight at 37°C in a CO2 incubator. The cells were treated with various concentrations of echistatin. At various time intervals, 100 µl of fresh medium was replenished and 20 µl of 3-(4, 5-dimethylatiazol-2yl)-5-(3-carboxymethoxyphenyl)-2H-tetrazolium (MTS) (Promega, Madison, WI) was added to the cells. After incubation for 1 h, absorbance was measured using a microplate reader (TECAN Group Ltd., Männedorf, Switzerland) at 490 nm. The assay was performed in triplicate and at least twice. Cell images were observed with a fluorescence microscope (IX71, Olympus Corp., Tokyo, Japan).

An in vitro migratory/invasiveness assay was carried out with Corning® (Tewksbury, MA) HTS Transwell-96 plates uncoated or coated, respectively, with a basement membrane extract (Trevigen, Gaithersburg, MD) according to manufacturer’s instructions. 143B-LM4 cells (5×104) were added to the upper chamber and various concentrations of echistatin were added to the lower chamber (0.5 µg/mL, 1.0 µg/mL, 5.0 µg/m), for both the migration and invasion assays. The lower chamber had the same conditions for the migration and invasion assays. For the migration assay, an uncoated well was used for the upper chamber. For the invasion assay, a well coated with a basement membrane was used as the upper chamber. For both assays, cancer cells were seeded in the upper chamber. The plate was placed for 24 h at 37°C in a tissue culture incubator. After incubation for 24 h, 100 µl of fresh medium was gently replenished in the lower chamber and 20 µl MTS was added to the lower chamber to determine cell viability. After incubation for 1 h, the absorbance was measured using a microplate reader at 490 nm. The assays were performed in triplicate and at least twice, independently.

The adhesion assay was carried out with CultureCoat® Vitronectin 96-well dishes (Trevigen) according to the manufacturer’s instructions. 143B-LM4 cells were labeled with 2 µM calcein AM (Invitrogen, Carlsbad, CA), harvested and then re-suspended in medium to a final concentration of 1.5×105 cells/ml. Only live cells can absorb this agent. 143B-LM4 cells (1.5×104/100 µl) were added to each well and were either left untreated or treated with echistatin (0.5 µg/mL, 1.0 µg/mL, 5.0 µg/mL), and placed for 1 h at 37°C in a CO2 incubator. The medium was gently removed. The wells were washed twice gently with PBS. The fluorescence intensity of the cells remaining on the bottom of the well was measured using a SPECTRAmax GEMINI Dual-Scanning Microplate Spectrofluorometer, (Molecular Devices, Sunnyvale, CA) at an excitation/emission wavelength of 485/520 nm. The assay was performed in triplicate and at least twice independently.

The data are presented as mean ± SD or mean ± SEM. Statistical analysis was with ANOVA for multiple data sets. P-values of less than 0.05 were considered significant.

This paper is dedicated to the memory of A. R. Moossa, M.D. and Sun Lee, M.D.

This work was supported in part by a grant from the Nakatomi Foundation.