To access possible relationships between breast cancer subtypes (BCS) and patterns of distant metastasis in advanced breast cancer. Breast cancer patients with distant metastasis at two academic centers from 2000-2015 were retrospectively reviewed. The breast cancer was classified into four subtypes: hormone receptor (HR) +/ human epidermal growth factor receptor 2 (HER2) − (i.e., estrogen receptor [ER] + and/or progesterone receptor [PR] +, HER2−); HR+/HER2+ (ER+ and/or PR+, HER2+), HR−/HER2+ (ER− and PR−, and HER2+); and HR−/HER2− (ER− and PR−, and HER2−). A total of 679 patients were identified. The distribution of the BCS was 39.9% (271/679), 23.7% (161/679), 16.8% (114/679), and 19.6% (133/679) in HR+/HER2−, HR+/HER2+, HR−/HER2+, and HR−/HER2−, respectively. Patients with HR+/HER2+ and HR−/HER2+ subtypes were prone to abdominal and pelvic metastasis, those with HR+/HER2− and HR+/HER2+ subtypes were prone to bone metastasis, while patients with the HR−/HER2− subtype were prone to lung/mediastinal and brain metastases. In patients with pleural, axillary and/or neck lymph node, and other distant soft tissue metastases, there was no significant difference in metastatic patterns among the BCS. There are different patterns of distant metastasis associated with different BCS. There should be a different focus in the postoperative follow-up and monitoring of breast cancer patients with different BCS.

Currently, common risk factors for distant metastasis of breast cancer include tumor size, nodal stage, histological grade, estrogen receptor (ER), progesterone receptor (PR), human epidermal growth factor receptor 2 (HER2), and others [9–11]. Traditional tumor-node-metastasis (TNM)-staging may predict the risk of breast cancer metastasis and death, but the predictive value for specific sites of metastasis is poor. Breast cancer, a heterogeneous disease composed of distinct biological subtypes, can be divided into four simple subtypes based on ER, PR and HER2 status: hormone receptor (HR)+/HER2−, HR+/HER2+, HR−/HER+, and HR−/HER2− [12–14]. The breast cancer subtypes (BCS) are increasingly recognized as predictive factors for disease control and response to adjuvant therapies including chemotherapy, radiotherapy and targeted therapy [15–17]. However, data are limited and conflict concerning differences in specific sites of distant metastasis among the various BCS [18–21]. In this study, we sought to access the possible relationships between BCS and patterns of distant metastasis in advanced breast cancer patients from two cancer centers to aid in the development of personalized programs of surveillance.

Table 1: Summary of characteristics in 679 patients enrolled in this study 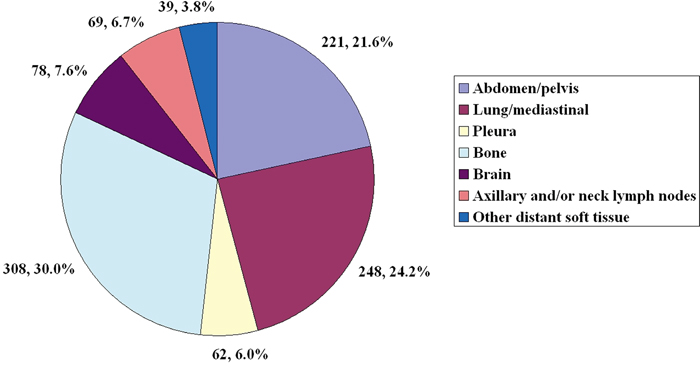 Figure 1: The frequencies of the sites of distant metastasis.

Association of breast cancer subtypes with the sites of distant relapse

Figure 2: The frequencies of the sites of distant metastasis by breast cancer subtypes.

Breast cancer subtype is an important factor affecting the survival of breast cancer patients irrespective of distant metastasis. In general, the survival of HR+ patients is superior to that of HER2+ and HR−/HER2− (also called triple-negative breast cancer [TNBC]) patients [15–17]. Park et al. found that BCS did not affect the OS of patients with early recurrence (distant metastases within 24 months after surgery; P = 0.08), but for patients with distant metastases ≥24 months after surgery, BCS significantly affected the OS, and the survival of HR+/HER2− and HR−/HER2+ patients was superior to that of the HR+/HER2+ and HR−/HER2− groups (P < 0.001) [18]. Considering the St Gallen molecular subtypes (2013), Gerratana et al. found that the median survival time for luminal HER2+ was 56.7 months, luminal A 45.3 months, luminal B 31.1 months, non-luminal HER2+ 21.5 months, and TNBC 9.3 months (P < 0.0001) [19]. Based on our results and related studies, BCS has both prognostic value for newly diagnosed and advanced breast cancer patients, and can also predict the patterns of distant metastases.

There are several limitations of the present study. First, there is an inherent bias that exists in any retrospective study. However, a major strength of the study is that the large number of patients with distant metastases in this cohort allowed clear demonstration of the distant metastasis patterns according to BCS. Second, the time span of the patients included is large, while the adjuvant treatment of breast cancer has made rapid progress in recent years; therefore the systemic therapy guidelines during the era of this study are not representative of current practice guidelines. But whether these will affect the patterns of breast cancer metastasis is still unclear. In addition, Ki-67 is an important marker for the molecular subtypes, but Ki-67 data was not available for >50% of the patients in our study. Therefore, Ki-67 was not used as a marker for the BCS in our study. However, Kennecke et al. found that the distant metastasis rate in various organs in luminal B (ER+ and/or PR+ and Ki-67 ≥14%) patients was higher than for luminal A (ER+ and/or PR+ and Ki-67 <14%) [21], indicating that Ki-67 had a potential impact on the metastasis patterns.

A retrospective analysis was conducted of breast cancer patients who underwent surgery in SYSUCC and the First Affiliated Hospital of Xiamen University (Xiamen Cancer Center, XMCC) from December 2000 to April 2015. Patients in the study were met the following criteria: 1) female, unilateral invasive breast cancer without distant metastasis in the initial diagnosis; 2) received mastectomy or breast-conserving surgery and axillary lymph node dissection; 3) sites of metastases were definitely identified during follow-up; 4) complete data on the following: age, menopausal status, tumor size, nodal status, histotype, and ER, PR as well as HER2 status. We excluded patients with primary cancer before the diagnosis of breast cancer and second cancer after breast cancer. The study was approved by the Ethics Committees of the SYSUCC and XMCC.

Age, menstrual status, T stage, N stage, histotype and BCS were used to evaluate the patterns of distant metastasis. HR positivity was defined as ≥1% positive cells in ER or PR immunohistochemistry. HER2 positivity was defined as an immunohistochemical grade of 3+ (uniform and intensity membrane staining of > 30% of invasive tumor cells), or (after 2003 only) of 2+ determined by dual-probe fluorescence in situ hybridization. The cut-off point of higher Ki-67 expression was defined as 25% based on our previous studies [33]. Since Ki-67 data was missing for many patients, the BCS was not defined according to the St Gallen International Expert Consensus [34]. Instead, we defined four-major intrinsic BCS [11–13]: HR+/HER2− (ER+ and/or PR+, HER2-), HR+/HER2+ (ER+ and/or PR+, HER2+), HR−/HER2+ (ER−, PR− and HER2+) and HR−/HER2− (ER−, PR− and HER2−).

No any actual or potential conflicts of interest exist.