Lung cancer is one of the primary causes of cancer-related death worldwide and greater than 80 percent of lung cancer patients have non-small cell lung cancer (NSCLC) [1-3]. Despite improvements in treatment modalities (such as surgical resection, chemotherapy, radiotherapy, and targeted therapy), the long-term survival of NSCLC is still dismal with 5-year survival rate less than 15 percent due to cancer relapse and metastasis [4-6]. Thus, identification of novel prognostic biomarkers and therapeutic targets is urgent.

FABP3 and FABP4 belong to fatty acid binding protein (FABP) family, which control the metabolism and transportation of long-chain fatty acids. FABP3 plays various roles in fatty acid transport, cell signaling, cell growth, and gene transcription [7]. Recent clinical studies have indicated the participation of FABP3 in tumor progression with conflicting functions. In breast cancer, FABP3 acts as a tumor suppressor gene: its expression was downregulated in breast cancer samples; FABP3 cDNA transfection in breast cancer cell lines leads to a modest anti-proliferative activity [8]; similarly, over-expression of FABP3 in embryonic cancer cells inhibits cell growth and leads apoptosis [9]. On the other hand, elevated FABP3 expression is associated with tumor progression, aggressiveness and poor prognosis in gastric carcinoma [10]. Thus far, there has been no study of FABP3 in NSCLC development and progression.

FABP4 has been linked to the development of metabolic syndrome, diabetes, and arteriosclerosis [11]. FABP4 is a prognostic predictor in infiltrating or invasive bladder cancer [12], and FABP4 is a potential therapeutic target for metastatic prostate cancers [13]. However, FABP4 in NSCLC has not been investigated. 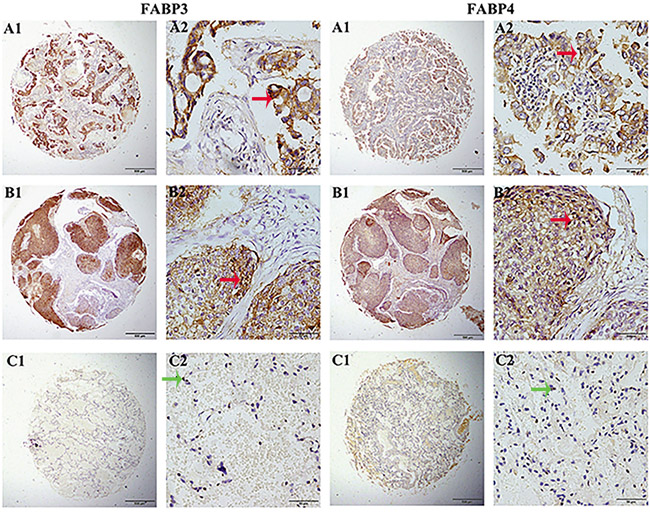 Table 1: Relationship between FABP3 and FABP4 protein expression in cancerous tissues and clinicopathological characteristics in NSCLC

*P<0.05 a, others, Adenosquamous carcinoma 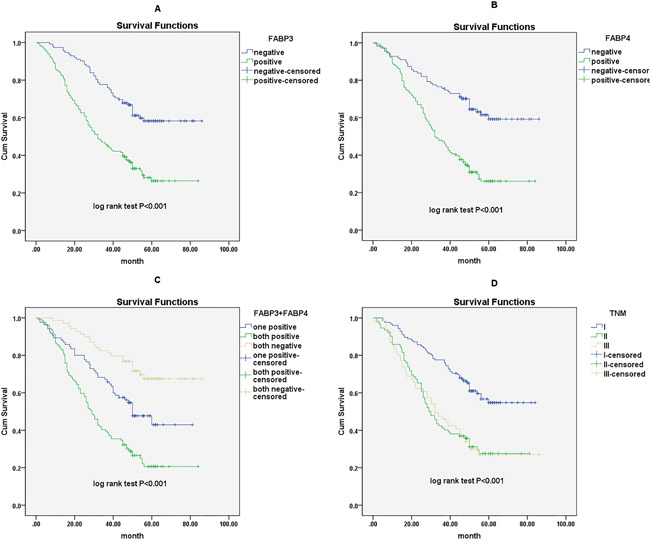 *P<0.05. TNM stage contains T stage and N stage, therefore, they were not included in the multivariate analysis.

The principal role of FABPs is to regulate fatty acid uptaking and intracellular trafficking. Each member of FABP family is a tissue-specific intracellular fatty acid carrier protein. FABPs regulate the concentration of intracellular free fatty acids and maintain a stable internal environment for lipid metabolism [14]. Recent studies have indicated that fatty acid metabolism is involved in tumorigenesis and tumor progression of many types of cancer [15-17], by influencing tumor proliferation and tumor migration. FABPs are differentially expressed in various cancers and are suggested potential tumor biomarkers [10, 18-22].

Besides its functions in lipid transport, storage, and metabolism [23], FABP3 is also involved in cell growth and proliferation. FABP3 expression is elevated after myocardial injury, and is widely used as a marker of acute myocardial infarction and stroke [24-26]. More recent studies demonstrated the interaction between FABP3 and cancer biology in various types of cancer, including breast cancer [8], gastric carcinoma [10], brain tumor [27], and small cell lung cancer [28]. Besides binding to long-chain fatty acids, FABP4 is also capable of binding to a variety of hydrophobic compounds, including cycloxygenases and oxidative products of fatty acids. It functions in both glucose and lipid metabolism [29, 30], and is involved in signal transduction [31], as well as in cell proliferation and apoptotic processes [32]. Its involvement in tumorigenesis has been investigated in bladder cancer [12], breast cancer [33, 34], ovarian cancer [35, 36], and oral squamous cell cancer [37]. However, there have been few studies of FABPs in NSCLC patients. Our results suggest that FABP3 and FABP4 could be promising biomarkers in NSCLC.

Several studies have demonstrated the association between FABP4 expression and poor prognosis in several tumors [38-40], which were consistent with our current findings. However, the role of FABP3 in tumor is controversial: FABP3 can act as either a tumor suppressor or an oncogene depending on tumor types. In breast cancer and embryonic cancer cells, FABP3 acts as a tumor suppressor [41]: FABP3 inactivation inhibits apoptosis and promotes proliferation; while FABP3 acts as an oncogene in gastric carcinoma, brain tumor and small cell lung cancer [42]. Our study indicated that FABP3 acts as an oncogene in NSCLC.

The underlying molecular mechanism of FABP3 and FABP4 in tumorigenesis has been investigated in a few studies. Song GX et al reported that in embryonic cancer cell, FABP3 promoted apoptosis through inducing mitochondrial impairment [7]. Hu J et al described that in ovarian cancer, FABP4 promoted fatty acids absorption from adipocytes for rapid tumor growth in adipocyte-rich microenvironment [43]. Further in vitro functional studies are needed to elucidate the molecular mechanisms of FABP3 and FABP4 in NSCLC. Our finding of the positive correlation between FABP3 and FABP4 expression suggest that these two proteins may act in the same signaling pathway in promoting tumor progression.

Our study confirms that fatty acid metabolism pathway is involved in tumorigenesis again. It is well documented that tumor cells have unique metabolic requirement comparing to normal cells [44]. Earlier studies have focused on glucose and glutamine metabolism pathways during tumor development. Latest research has suggested that fatty acid metabolism also plays an important role in various aspects of tumor cell proliferation, transformation and migration [45]. Mechanistically, the high proliferation rate of tumor cells requires a large amount of fatty acids [46], not only as energy source, but also as building blocks for large biomolecules [47, 48]; many lipid molecules can act as signaling molecules that induce carcinogenesis [49]. FABPs, a super-family of lipid binding protein, have important functions on the uptake, transport and oxidation of fatty acid and their derivatives. Therefore, FABPs represent potential novel targets as cancer biomarkers and therapeutic targets. Future studies are needed to elucidate the mechanism of FABP3 and FABP4 in fatty acid metabolism and in NSCLC tumorigenesis.

Our study has several limitations. First, our study is a retrospective correlation study, thus we do not know whether FABP3 and FABP4 protein expression is the driving force of NSCLC progression or the consequence of NSCLC development. Larger prospective studies are needed to distinguish these two scenarios. Second, protein quantification by IHC analysis is subjective and semi-quantitative; our results on FABP3 and FABP4 protein expression should be independently validated by other methods. Finally, we did not perform in vitro functional studies to elucidate the molecular mechanisms of FABP3 and FABP4 expression and NSCLC development.

In conclusion, our results demonstrated that both high FABP3 and FABP4 protein expression is associated with poor prognosis in NSCLC. Our study provides rationale to further investigate the involvement of fatty acid metabolism signaling pathway in NSCLC development as well as FABP3 and FABP4 as potential prognostic markers and therapeutic targets in NSCLC.

NSCLC cancerous tissues (n=281) and matched adjacent non-cancerous tissues (n=121) were collected as archived formalin fixed, paraffin embedded samples from human clinical biobank in Affiliated Hospital of Nantong University, Jiangsu Province, China. The ages of patients ranged from 35 to 83 years old, with a median of 62.1 years old, including 85 women and 196 men. All cases were histologically diagnosed with NSCLC. None of the patients had received neo-adjuvant chemotherapy, radiotherapy or immunotherapy before surgery. All patients had signed informed consent before surgery and the Research Ethics Committee approved this study.

NSCLC cancerous and matched adjacent non-cancerous tissues were prepared for TMAs. The manual Tissue Microarray System Quick-Ray (UT06, UNITMA, Korea) was used to generate TMAs. Core tissue samples (diameter of 2 mm) were obtained from paraffin embedded tissue sections and deposited in paraffin-recipient blocks. Before immunohistochemical processing, the tissue microarray specimens were cut into 4-μm-thick sections and placed on the super frost charged glass microscope slides. IHC was carried out as described before [50]. Briefly, the slides were incubated with the primary antibodies for FABP3 (1:100; Abcam, Cambridge, MA, USA) and FABP4 (1:100; Abcam, Cambridge, MA, USA) overnight at 4°C. Subsequently, the slides were incubated with anti-mouse IgG secondary antibody (Abcam) for FABP3 and horseradish-peroxidase-conjugated rabbit IgG (Abcam) for FABP4. Diaminobenzidine solution was used for the color development.

Pearson χ2 test was used to evaluate the correlation of FABP3 and FABP4 expression with clinicopathological characteristics of NSCLC patients. Spearman correlation test was performed to determine the correlation between FABP3 and FABP4 protein expression. Both univariate and multivariate Cox regression analysis were used to identify independent prognostic factors. Kaplan–Meier and the log-rank tests were used to calculate survival curves. P value of less than 0.05 was regarded as statistically significant. All statistical analyses were accomplished in SPSS version 20.0 statistical software (SPSS Inc., Chicago, IL, USA).

We thank the clinical biobank members in Affiliated Hospital of Nantong University.