The global cancer burden is growing at an alarming rate, which drives an urgent need for the implementation of effective prevention strategies. Lung cancer is one of the most critical types [1]. The 5-year relative survival rate of lung cancer patients is gradually improving due to improvements in treatment. In China, lung cancer is the most common incident cancer and the leading of cancer death [2]. Lung cancer is classified by histological criteria into non-small cell lung carcinoma (NSCLC), which consists of three main subtypes (adenocarcinoma, squamous cell carcinoma, and large cell carcinoma), and small cell lung carcinoma. Rare subtypes include glandular tumors, carcinoid tumors, and undifferentiated carcinomas.

The fusion of the Echinoderm microtubule-associated protein like-4 (EML4) and anaplastic lymphoma kinase (ALK) represents another distinct type of mutation that may drive the development of NSCLC. The fusion protein is highly oncogenic both in vitro and in vivo and results in the constitutive activation of the ALK pathway and ultimately cancer development [9]. Several clinical trials have demonstrated the remarkable efficacy of crizotinib for the treatment of metastatic NSCLC in patients who harbor ALK rearrangements. These results led to the approval of this agent by the US Food and Drug Administration and the European Medicines Agency [10–13]. EML4-ALK rearrangements were reported to be primarily associated with younger age at diagnosis and with adenocarcinoma [14]. However, the impact of the source of specimens in predicting EML4-ALK rearrangements has not been established.

One of the most challenging problems in clinical practice is the acquisition of adequate tumor tissues for analysis. Therefore, the use of available clinicopathological data to predict the likelihood of certain genetic aberrations is of special significance. Furthermore, EML4-ALK rearrangements and EGFR mutations represent two distinct oncogenic mechanisms that might have different clinicopathological features. With ongoing improvements in modern medical technology, many types of biopsies are widely used in clinic. A small biopsy involves taking a small piece of diseased tissue for pathologic examination for the purposes of obtaining a preoperative diagnosis and optimizing the corresponding treatment. The means for this type of sampling include bronchial fiberscopic techniques, ultrasonic bronchoscopy or percutaneous lung biopsy [15, 16]. The advantages of small biopsies are that they are minimally invasive, simple operations with fewer complications and greater patient acceptance that can generally be performed as outpatient procedures. Furthermore, diagnosis is possible in the vast majority of cases. These techniques have wide clinical uses. Therefore, many small biopsy specimens are used to detect gene mutations. Compared with surgical specimens, the small biopsy specimens may have a low proportion, smaller numbers, and a scattered distribution of the tumor cells. In contrast to histopathologic diagnosis, IHC and genetic testing results, it is difficult to enrich the tumor cells. For small biopsy specimens, simple and rapid detection methods with high sensitivity and strong specificity are required. Here, we detected EGFR mutations using the amplification refractory mutation system (ARMS) in 721 NSCLC patients and measured EML4-ALK expression with the VENTANA ALK (D5F3) immunohistochemistry (IHC) method in 385 NSCLC patients to determine the feasibility of using small biopsy specimens for genetic testing and immunohistochemical detection. 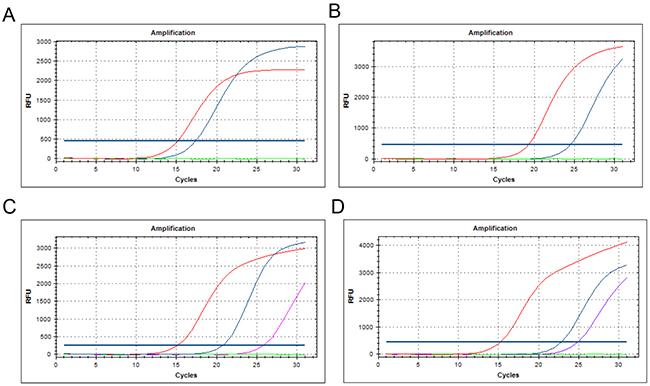 Figure 1: The ARMS method was used to detect EGFR gene mutations including the exon 19 deletion A. exon 21 L858R point mutation B. the combination of the 19-del and L858R mutation C. and L858R and T790M mutations D.

Table 3: Comparison of the EGFR mutation rates for small biopsy and surgical specimens

Table 4: The comparison of the EML4–ALK-positive rates for small biopsy and surgical specimens

In the context of a significantly higher incidence of lung cancer in recent years, targeted molecular therapy has become an important treatment approach for patients with lung cancer. Among these targeted therapeutic agents, TKI based on the EGFR mutations have been widely used in the clinic, and the ability to provide information on the EGFR mutations in clinical tumor tissues with the goal of guiding targeted therapy in a timely manner has become an important goal of lung cancer molecular detection [17–20]. However, approximately 70-85% of new lung cancers are not suitable for surgical therapy, which means that only small biopsy specimens that can be obtained by puncture or bronchial microscopic biopsy are available for diagnosis or further genetic testing [21].

The anaplastic lymphoma kinase (EML4-ALK) fusion gene is an important biological marker of NSCLC. EML4 and ALK are two genes is located in p21 and p23 of human chromosome 2, approximately 10 MB apart. Inversion fusion of the two genes can produce the new fusion protein, EML4-ALK [22, 23]. The identification of EML4-ALK-positive tumors is very important for NSCLC patients because ALK tyrosine kinase inhibitors may shrink tumors that are EML4-ALK positive. Crizotinib, an oral ALK inhibitor, has been shown to be an important inhibitor of tumor growth and survival that reduces or slows tumor growth [12, 24]. The identification of new methods for the identification of gene mutations in tumors is important in the development of targeted therapeutic agents.

Currently, the principal detection methods for EML4-ALK include FISH, RT-PCR and IHC [25–29]. Because manual performance of the FISH technique is difficult, time consuming, difficult to standardize and requires fluorescence microscopy, it is not widely used for EML4-ALK screening. Furthermore, RT-PCR is also not recommended for the detection of EML4-ALK rearrangements because there are subtypes of the EML4-ALK rearrangements, and RT-PCR can only detect known mutations. In addition, there are more stringent requirements for the sample preparation due to the rapid degradation of RNA. The IHC method using Roche/VENTANA ALK IHC (D5F3) detection system is the easiest to perform. This technique uses a kit containing high sensitivity/specific ALK antibodies (D5F3) with enhanced second antibody and amplification reagents. Detection of the EML4-ALK protein was tested in the BenchMark series fully automatic immunohistochemical instrument, and the test results were reported as a simple binary score (negative/positive) [30, 31]. We showed that the EML4-ALK-positive rate for the surgical specimens was significantly higher than that for the small biopsy specimens. Independent of the gender and histological types, the EML4-ALK positive rate of surgical specimens was significantly higher than that of the small biopsy specimens. Clearly, the use of small biopsy specimens had an effect on the EML4-ALK positive rate on the basis that they provided smaller quantities of tissue protein. The expression of EML4-ALK was detected by using Roche/VENTANA ALK IHC detection system from the protein expression level and the sensitivity is lower than that from the DNA expression. Moreover, more tumor tissues are needed to get a satisfactory result from the DNA expression level. Therefore, detection of EML4-ALK from small biopsy specimens is better than that from surgical specimens.

Approval to review, analyze, and publish the data in this study was given by the Ethics Board of Xiangya Hospital of Central South University. Written informed consent for the collection of medical information was obtained from all patients at their first visit.

A total of 10 pieces 5-8 microns thick were sectioned from wax blocks selected from those with more tumor tissues, and 75% alcohol was used to sterilize the equipment between each case to prevent cross contamination. The tumor tissue genomic DNA was extracted using an AmoyDx DNA extraction kit. After the extraction of the DNA, its concentration and quality were evaluated using a Nanodrop ultramicro spectrophotometer, with a quality criterion of 1.7 < OD260 / OD280 < 2.1.

Mutational analysis of the EGFR was carried out according to the ARMS method using a human EGFR gene mutation detection kit (PCR fluorescence probe method) from Amoy Diagnostics Company [32–34]. We detected 29 mutations in 4 exons of the EGFR gene using this procedure. These included three point mutations of G719X in exon 18; 19 deletion mutations in exon 19; T790M, S768I and 3 insertion mutations in exon 20; and L858R and L861Q point mutations in exon 21. The E GFR mutations were detect ed using CFX96-type fluorescent quantitative PCR from Bio-Rad company. Each batch of reactions was set up to include simultaneous positive and negative controls. After the reaction, the fluorescent signal curves and the threshold line were used to interpret the mutation results.

After 3 mm thick paraffin slices were baked, the slices were dyed directly using the Benchmark XT automatic immunohistochemical dyeing machine (American VENTANA company). The dyeing procedure was performed according to the instructions provided with the kit. The test results were evaluated using light microscopy. A binary method of interpretation was used as follows: strong granular cytoplasmic staining (any percentage) in the tumor cells was scored EML4-ALK (+), otherwise they were scored EML4-ALK (-).

The chi-square test (or Fisher exact test) and independent samples test were applied to explore the univariate association between the clinicopathological variables and the specific genetic aberrations for the categorical and continuous data for EGFR and EML4-ALK, respectively. All statistical calculations were performed using SPSS version 19.0 (SPSS, Inc., Chicago, IL.) A two-tailed P value of 0.05 was considered significant.

We would like to thank all laboratory members for their critical discussion of this manuscript.

The authors declare no conflict of interest. This manuscript has been read and approved by all of the authors and has neither been submitted nor is under consideration for publication elsewhere.