Correction: Inhibition of EHMT2/G9a epigenetically increases the transcription of Beclin-1 via an increase in ROS and activation of NF-κB

This article has been corrected: Due to errors during data processing, partial duplication occurred between Figures 2c, 2e and 4b. In addition, typing errors were made within Figure 6e and Supplemental 4a. In Figure 6e, the correlation coefficient (r value) in the picture is -0.177. In the original picture, the ‘-’ is missing. In Supplementary figure 4a, the labeling of BECN-1 and EHMT2 were reversed. The authors declare that these corrections do not change the results or conclusions of this paper.

Figure 2: Epigenetic transcriptional activation of Beclin-1 by EHMT2 inhibition. c, d and e. MCF-7 cells and HS578T cells were treated with 10 μM BIX for 4 h or MCF-7 cells were transfected with 1 μM siEHMT2. Treated cells were analyzed by ChIP. The ChIP analysis performed with anti-H3K9me2, anti-EHMT2, and anti-RNA pol II antibodies was compared with normal rabbit IgG as a negative control. An equal amount (input) of DNA–protein complex was applied. Real-time quantification of the Beclin-1 promoter sequences was carried out with anti-H3K9me2 ChIP, anti-EHMT2 ChIP, and anti-RNA pol II ChIP (right panel). Results are presented relative to the input and are the fold-changes over the control expressed as means ± SEM of three independent experiments. *P < 0.001 compared with control or siCont by one-way ANOVA. 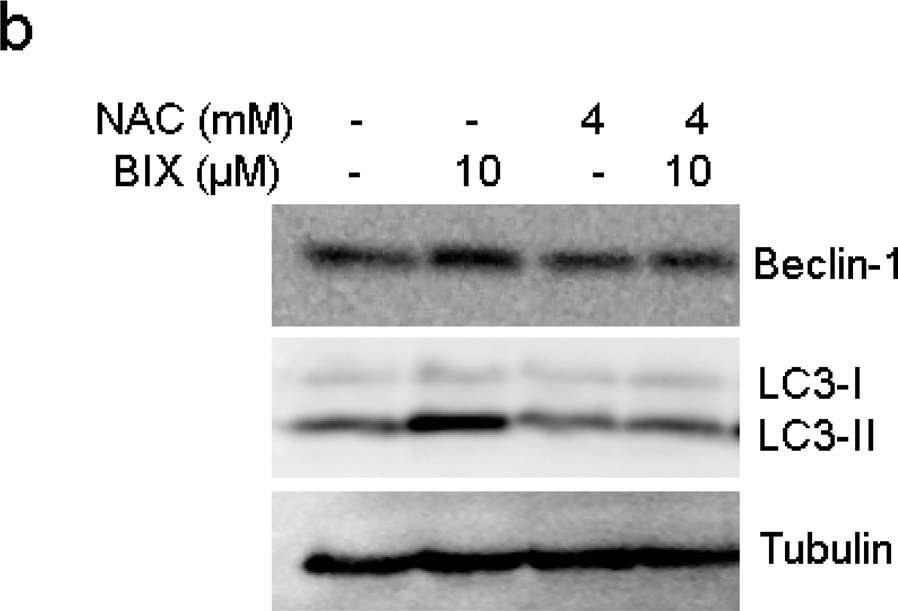 Figure 4: Intracellular ROS-mediated activation of autophagy in response to EHMT2 inhibition. b. Inhibition of ROS by NAC resulted in the reduction of Beclin-1 expression. MCF-7 cells were treated with 10 μM BIX for 4 h in the presence or absence of 4 mM NAC. Western blotting was carried out using the specified antibodies.