Correct: The proper figure images are shown below. The authors sincerely apologize for this error. 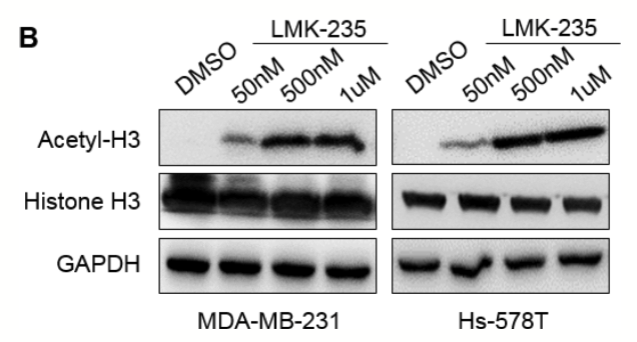 Figure 4: LMK-235 inhibits BC cell proliferation and induces apoptosis. B. MDA-MB-231 and Hs-578T cells were treated with DMSO or 50 nM, 500 nM, or 1 μM LMK-235 for 24 hours. The levels of acetyl-histone H3 and total histone H3 were examined by western blot. GAPDH was used as a loading control.

Figure 5: LMK-235 synergizes with bortezomib in BC cells. F. MDA-MB-231 and Hs-578T cells were plated in Matrigel invasion chambers and treated with 200 nM LMK-235 and/or 5 nM bortezomib for 24 hours. Three separate experiments were conducted, and representative results are shown. Magnification, ×100. Columns indicate the average number of invading cells from 5 random microscopic fields. *p<0.05 compared with the DMSO group; **p<0.05 compared with the equivalent doses in the LMK-235- or bortezomib-treated groups.